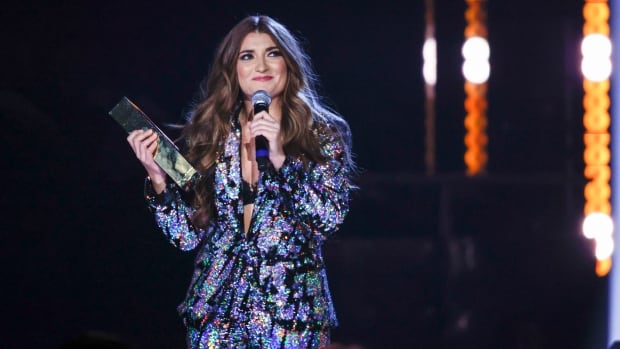 Townes, who also shared co-hosting duties with Atlanta artist Blanco Brown, went into the weekend with a leading seven nominations. She won songwriter of the year, female artist, single of the year for Girl Who Didn’t Care, entertainer of the year and album of the year for Masquerades.

“This is so cool. Man, this feels so good to be back here in Alberta,” the Grande Prairie native who now lives in Nashville, said, paying tribute to female artists that came before her.

“It’s 40 years of the CCMAs and I would not be standing here if it weren’t for the heroes who held on to this, that came before and paved a path…. Patricia Conroy, Terri Clark, Carolyn Dawn Johnson and here’s to the ones coming next, too,” she said.

“Thank you guys for listening to my music and making this Grande Prairie girl’s dream come true.”

Townes told reporters backstage that her album Masquerades was a product of the COVID-19 pandemic.

“Writing that music in the middle of pandemic, feeling so lost and isolated and the entire world is going through so much — to be able to find healing in music in that time was such a light. That album will always represent that to me.”

Townes has won 14 CCMA Awards in her career. She was also among the performers at the show, closing the broadcast with her song The Last Time.

Dallas Smith, who was last year’s big winner, won male artist for the second year in a row, as well as the coveted fans’ choice award.

“My parents, they’re at home in Langley watching with a bunch of friends. Got my little girls watching at home with their grandma. It’s a dream come true to be able to involve family and work like this,” he said.

“It all comes down to the fans that I’ve made over the last 22 years in the music business. And I have never, ever, ever felt the love that I have felt from the fans and the country music community.”

The first award of the evening went to the Reklaws for group or duo of the year.

The brother-sister pair, Jenna and Stuart Walker, weren’t able to attend, saying they were mourning the death of their mother.

“She loved the CCMAs, so they would like nothing more than to dedicate this award in her honour and anyone else affected by mental health,” said presenter Jojo Mason.

The rising star award went to Andrew Hyatt, who joked this was a long time coming.

“Man. Honestly I feel like I’ve been rising for so long I should probably go see a doctor about it,” he said with a laugh.

‘Breathtaking’ Webb images to reveal the secrets of star birth

With Poilievre’s victory, some Liberal MPs hope party will pivot to the centre