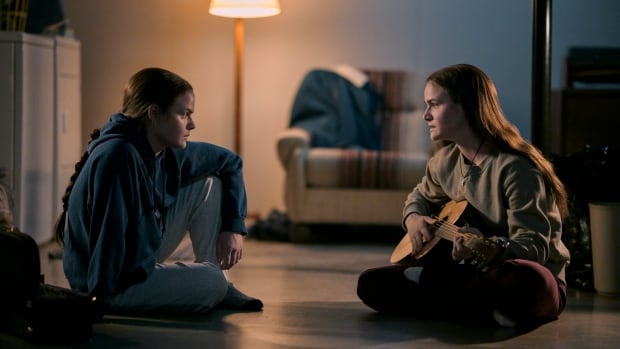 
While writing their 2019 memoir High School, Canadian musicians Tegan and Sara Quin joked that their coming-of-age story — which recounts the twin sisters’ lives as queer teens in 1990s Calgary — would make for a great TV show.

Soon after the New York Times bestseller was published, that joke turned into a serious conversation, and the Quin sisters turned their focus to developing a fictional TV series by the same name.

High School premiered at the Toronto International Film Festival in September. It will be available to Canadian audiences Oct. 28 on Prime Video Canada.

“We were able to translate an important universal story that is also very specific about twins and becoming artists and queerness and identity and friendship, and we’re really proud of it,” Sara Quin told CBC News ahead of the show’s premiere.

“People love the ’90s,” her sister Tegan chimed in.

Playing music together since they were 15

As pop-rockers Tegan and Sara, the duo has won multiple Juno Awards, been nominated for a Grammy and was shortlisted for the Polaris Music Prize. But the Quins have been playing music together since they were 15, when Calgary was an early hotbed for underground indie rock artists.

The show, which was filmed at their Calgary high school, shows the fictionalized Quin sisters experimenting with music, keeping their queerness a secret from each other, going to raves and fistfighting in their childhood home.

Much of that friction is on display in the six-episode series, with real-life sisters Railey and Seazynn Gilliland playing 15-year-old versions of Tegan and Sara, respectively.

WATCH | The trailer for High School, a TV adaptation of the 2019 memoir:

While Sara is at first determined to go her own way — caught up in a secret relationship with her best friend, Phoebe — Tegan feels rejected and outcast by her sister.

“We always say to people … Imagine hanging out with your sibling all the time and having a job with them,” said Tegan Quin.

Clea Duvall, best known for starring in the queer cult classic comedy But I’m a Cheerleader and for directing the Netflix comedy Happiest Season, was an easy choice to direct and co-write the story with screenwriter Laura Kittrell.

“This was the first time in our adult lives really surrendering our story or our voice to somebody who isn’t us, and I think it’s a testament to the trust and the intimacy we have with [Duvall] that we could do that,” Sara Quin said.

The show’s soundtrack is an homage to the ’90s boom in indie rock and grunge, featuring songs from The Smashing Pumpkins, Green Day and Slowdive. There’s a nod to Calgary band Red Autumn Fall, a favourite of the Quins during their teens.

While queer artists were increasingly visible during the ’90s — R.E.M.’s Michael Stipe was an inspiration for how he dressed and presented himself — Sara Quin said that she saw a lot of homophobia, “a lot of things that made me afraid.”

“I started to feel, like, a kind of internalized pride, like, ‘Oh my god, well, I want to kiss girls or I want to dress differently than people think I should dress.’ So it was really complicated,” she said.

“I think the show and our story really just sort of captures how polarizing that feeling was for queer adolescents in the 1990s.”