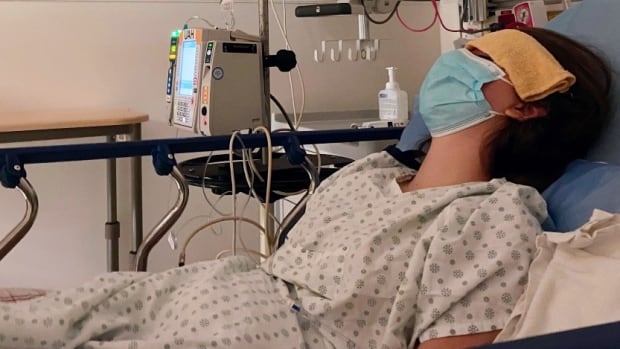 
A teenage girl’s agonizing wait to have her perforated appendix removed highlights the crisis that’s unfolding in Alberta hospitals and putting patient safety at risk, front-line health-care providers are warning.

“It was an unbelievable and terrifying experience,” recalled Sonia Furstenau, who was visiting Edmonton from B.C. with her family in late August when her 15-year-old suddenly became ill.

Furstenau, who is the Green Party leader in B.C., took her daughter to the ER at Edmonton’s Royal Alexandra hospital at 6:30 p.m. on Aug. 17.

She was armed with a letter from a doctor at a nearby walk-in clinic who sent them, suspecting appendicitis.

But, with the hospital overwhelmed, they waited 90 minutes before even seeing a triage nurse. Her daughter moved from the waiting room to an ER bed around 9 p.m. but wasn’t sent for tests and officially diagnosed with acute appendicitis until the next morning.

“The nightmare sort of got worse at this point,” Furstenau said.

After waiting through the night, she was told they needed to go to the Stollery Children’s Hospital for surgery, and that a surgeon was expecting them.

“There were no ambulances available. So they told us to drive her there ourselves.”

At the Stollery, they waited again.

According to Furstenau, after meeting with a doctor to discuss the surgery, they were sent back into the ER waiting room, where her daughter sat in a chair without being monitored and without any pain medication.

“Her fever was really high. Her heart rate was over 140. She was in agony,” Furstenau said, noting they were moved to the pre-op area at 5:45 p.m.

Finally,  at 11:45 p.m. — more than 29 hours after first going to the ER —  her daughter was wheeled in for her emergency surgery.

A nearby whiteboard indicated the procedure was 428 minutes behind schedule, Furstenau said.

In the operating room, doctors discovered the teen’s appendix was perforated and gangrenous, a potentially life-threatening condition.

“I think this was an inside view of a crumbling health-care system,” said Furstenau. “A ruptured appendix can be lethal. And of course that was going through my mind the whole time.”

Her daughter has recovered but she required a five-day hospital stay after her surgery.

“It wasn’t because people weren’t trying to help. There weren’t enough nurses, for sure.… There were far too many people and far too little space and health-care workers to help the people who needed it.”

This story is a symptom of the intense pressure within Alberta’s hospitals, according to Dr. Paul Parks, section president for emergency medicine with the Alberta Medical Association.

“Unfortunately, it’s extremely common now.… It’s not isolated to any one hospital or any zone,” said Parks, who works in the ER in Medicine Hat.

“We’re running our health-care system on a whole series of near misses every single day. And we now know we are missing some. There’s no question some people are dying of preventable and treatable illnesses because of access block and the system overcrowding.”

Hospitals are struggling with staffing shortages, and emergency department stretchers are often filled with admitted patients who are waiting for beds upstairs, he said.

“Then the only person that gets in next is the very life-threatening, dying, one person we can identify. Everybody else waits.”

Furstenau reported her concerns through the Alberta Health Services’ patient relations department, and staff have been in touch.

“We have contacted the patient’s family to apologize for the stress that this caused, and we are thoroughly reviewing the circumstances around this case,” spokesperson Kerry Williamson said in a statement emailed to CBC News. AHS as the health authority is responsible for answering questions on behalf of hospitals.

“We continue to experience significant pressure on our health-care system, particularly in our emergency departments, due to higher-than-usual volumes of seriously ill patients, the continued impact of COVID-19, and increased staff vacancies and absences due to illness. This is not unique to Alberta and is being experienced across the country,” he said, adding the most urgent surgeries are done first.

According to AHS, there was a 15 per cent increase in the number of emergency department visits in Alberta during the first quarter of this year, compared with the same time period last year.

‘Admit there is a problem’

“We know there are pressures. We know we have capacity issues.… Nurses and doctors and everybody are doing their best to keep Albertans safe. But we need political will to move us forward.”

The priority, according to Smith, should be on retaining and recruiting staff. That could include more funding for nursing schools and removing obstacles to internationally trained health-care providers, she said.

“I don’t feel the [provincial] government here has acknowledged the extent of the deficits we have here,” said Smith.

“We need to, first of all, admit there is a problem.”

Editor’s note: An earlier version of this story contained the name of Sonia Furstenau’s 15 year-old daughter with the family’s permission. After publication, the Furstenaus asked that her name be removed. This article has been updated.