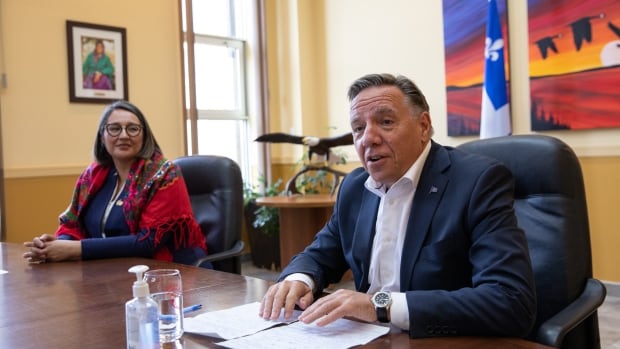 Talk of new dams in Quebec election has some Indigenous leaders surprised, others on guard


The François Legault government is eyeing down hydroelectric power from new mega-dams, as a way to meet both the province’s future power demands and greenhouse gas emission reduction targets — and the reaction from some Indigenous leaders ranges from surprise to anger.

On the campaign trail last Tuesday, the premier said the province needs to “build half a Hydro-Québec in the next few years” and dramatically increase power production by 50 per cent.

He also suggested that new dams were a strong contender for a re-elected Coalition Avenir Government and promised to ask Hydro-Québec to study the potential of new dams if re-elected on Oct. 3.

“I was caught by surprise with [premier] Legault’s announcement in his campaign,” said Cree Grand Chief Mandy Gull-Masty on Tuesday, adding there have been no discussions with Quebec about new dams to date.

The La Grande hydroelectric project, near present day Chisasibi, but also affecting the Eastmain and Rupert River watersheds, is responsible for about 50 per cent of the public utility’s current output.

The province needs another 100 terawatt hours to meet targets to bring greenhouse gas emissions down to zero by 2050, according to Legault’s Coalition Avenir Quebec party.

And while Gull-Masty points out the premier did not announce a new project, only a plan to study hydroelectric’s potential in the future, she also had a clear warning for any party leader with ideas for energy projects on Indigenous lands.

“You must confer with Indigenous peoples … whatever nation it is,” she said, adding that for the Cree Nation, any potential project is bound by the James Bay and Northern Quebec Agreement, signed by the Cree and Inuit in 1975.

In his announcement last week, Legault said any project would move forward in partnership with Indigenous communities.

“The idea is to have a partnership with these communities. We are talking about enormous economic benefits,” said Legault. And in an email response to a request for information on Tuesday, a CAQ spokesperson said it would be hard for the province to reach its climate change goals without considering new hydroelectric projects.

Gull-Masty also had a clear message about any possibility of dusting off a plan to dam the Great Whale River near the Cree and Inuit communities of Whapmagoostui and Kuujjuarapik in northern Quebec.

The project was shelved in 1992, after an intense and successful international campaign against it by Cree and Inuit leaders, as well as environmentalists.

“We were not open to it … and I can’t imagine that Cree Nation position has changed in this time,” said Gull-Masty, adding that if ever the possibility is raised, she will consult her people and follow their direction.

A hard ‘no’ from Innu of Ekuanitshit

In Innu territory of Quebec’s Côte-Nord region, the chief of Ekuanitshit, Jean-Charles Piétacho, had a more direct message for the premier.

“I would like Mr. Legault to learn a bit of the Innu language, and I would like him to learn the word ‘mauat’ which means ‘no’,” said Piétacho in an interview with Radio-Canada.

Already partially dammed, the powerful Magpie River has long been considered a target for a potential hydroelectric mega-project.

And in February 2021, the Innu Council of Ekuanitshit, along with regional municipality of Minganie, adopted separate but similar resolutions granting the river “personhood” and nine legal rights, including the right to flow, to maintain its biodiversity and the right to take legal action.

“For the Magpie River, we will refuse any Hydro-Québec development,” said Piétacho.

Chance for land rights to be discussed

For the head of the Assembly of First Nations for Quebec and Labrador, Legault’s announcement was not well thought out, but is an opportunity to start long overdue discussions about land rights and other Indigenous issues during the election campaign.

“I’m quite certain this was not his intention,” said Ghislain Picard. “There’s a need for a real, genuine political relationship between First Nations and the government of Quebec and I think we’re still very much short of that,” he said.

Cree Grand Chief Mandy Gull-Masty said she expects good relations with Quebec will continue no matter the party in power after Oct. 3.

She also encouraged Cree voters to register and get out and vote in large numbers.

“We are a very large population and we are able to send a strong statement to the government [about] what we want … [about] what our concerns are and how we want to be represented,” said Gull-Masty.