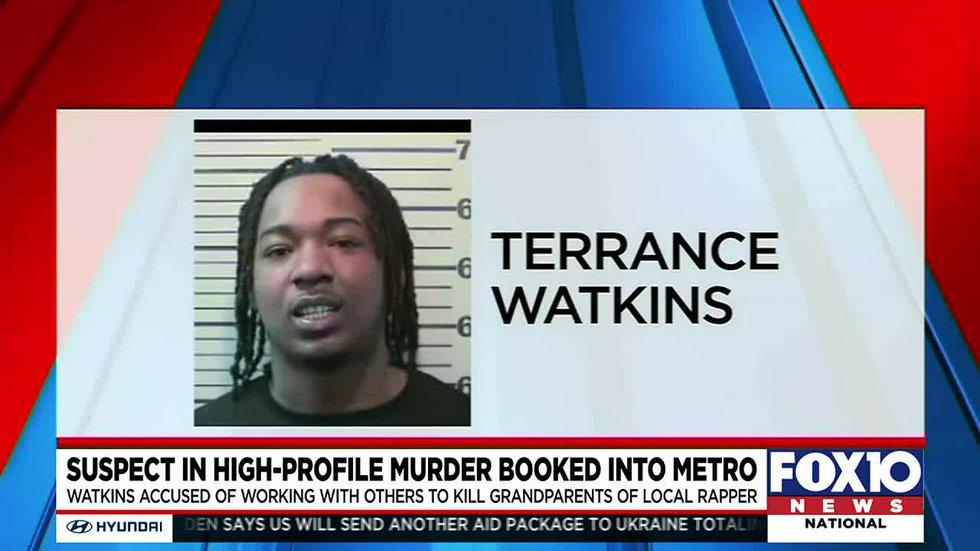 
MOBILE, Ala. (WALA) – Terrance Santez Watkins was booked into Mobile County Metro Jail Friday morning charged with two counts of murder plus shooting into an occupied building or vehicle.

Watkins, 25, of Mobile, is one of four men charged in the brutal murders of Tony and Leila Lewis, the grandparents of Mobile rapper HoneyKomb Brazy.

In February 2021, the couple was found dead in their Happy Hill home. Investigators testified that two gunman fired multiple rounds into the house, striking 62-year-old Tony Lewis one in the groin and once in the liver. the investigator said the house had five oxygen tanks, which he added likely sparked a blaze that killed 68-year-old Leila Lewis, destroyed the home and severely damaged a neighboring house.

During a hearing in March, a detective testified that Watkins felt disrespected by a Facebook post by another rapper, OMB Peezy, whom he thought was on the same record label as Brazy.

The detective also told the court that Watkins and the three others plotted to kill Brazy’s grandparents because they couldn’t get to Brazy or Peezy.

All four defendants have been in federal custody for the last couple of months on unrelated drug charges.

Both Mobile police and the Mobile District Attorney’s Office said they’re unsure if he was already sentenced in federal court or if they brought him to Mobile County to be sentenced first.

What precautions should you take as Covid-19 cases rise?