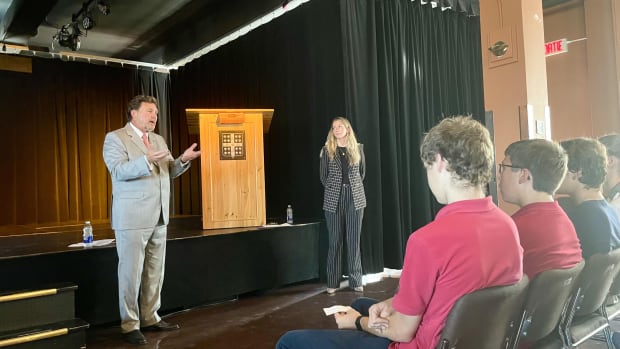 
Supreme Court Chief Justice Richard Wagner is usually the one quizzing the lawyers who plead their cases before Canada’s top court, but on Monday, he faced an audience of Quebec City high school students who wanted to know everything about his job and the court’s role.

Students at Collège François-de-Laval took turns asking Wagner questions about everything from his career path to abortion rights, the nomination of judges and the politicization of the court.

The rare public outreach event is part of a weeklong trip by the Supreme Court of Canada to Quebec City. The visit has to do with an overall project to make the Supreme Court more open and accessible to Canadians and to encourage a better understanding of how the Canadian judicial system works.

“It’s difficult to appreciate something that you don’t know,” the chief justice said in an interview with CBC’S Quebec AM Monday.

“I think that it’s important for the judges — and the judicial system as a whole — to take any opportunity that are given to them to explain to the public, to the citizens, what we do, how we do it and why we do it.”

Quebec AM9:55The Supreme Court of Canada on the road in Quebec City

The Supreme Court of Canada is holding public events and will hear two high profile cases in Quebec City this week. As Chief Justice Richard Wagner explained to host Julia Caron, it’s part of ongoing work to be more open with the public and encourage better understanding of the justice system.

While in Quebec City, the court will also hear two high-profile cases involving Quebecers and will meet with law students and the general public at various events.

This is only the second time in its history that Canada’s top court has held proceedings outside of Ottawa. It made a similar trip to Winnipeg in 2019.

Learning about the difference with U.S. courts

Félix Légaré, a Secondary 5 student at the Joseph-François-Perrault high school in the downtown area, said he “was honoured” that his school was among the nine schools the Supreme Court judges visited.

He said he felt a bit nervous when he stood up in front of his classmates to ask Justice Russell Brown a question. But the judge quickly put him at ease.

“We were able to see that it’s not because you’re a judge at the Supreme Court and that you have a very formal role that you’re necessarily someone who is inaccessible,” Légaré said. “It was humanizing.”

“That’s the aspect I found the most positive,” she said, because “it’s mostly the American Supreme Court that we know, especially with the books and TV shows that we see.”

Zubryzcki said the meeting was also an opportunity for her classmates who want to study law to learn about the field.

“He also told us about his career, where he’s from,” she said.

Richard Bérubé, who teaches humanities at Collège François-de-Laval and who helped his students prepare questions for their meeting with Wagner, said the event was a unique opportunity for them to learn how Canada’s judicial system compares to legal systems elsewhere.

“They appreciated it, they had a lot of questions,” he said. “Students heard about stuff coming from the U.S., about the Supreme Court there, so they were wondering: are we the same? Are we better?” he said.

It’s a question Wagner said he is keen to discuss during this visit. While Canada’s judicial system is not without its flaws, the chief justice said it is one of the most impartial and independent in the world.

He said, in comparison, the process to appoint a Supreme Court judge in the U.S. is much more political.

In Canada, an independent and non-partisan advisory committee identifies and suggests a short list of candidates for the prime minister to choose from, and the appointment is done by the Governor General.

“If we compare ourselves with the rest of the world, I think we should be very proud of our justice system,” said Wagner.