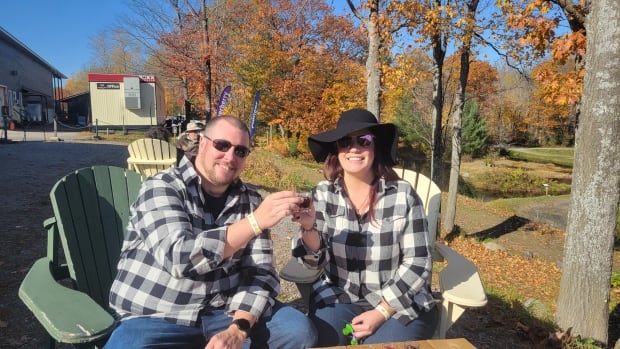 
Ashley Perry’s wedding dress hangs idle in her closet as she works to salvage the day she is to wear it.

Perry was looking forward to getting married in 2023 after two years of pandemic restrictions during which Perry worked tirelessly as a first responder, often battling with COVID-19 herself, and lost her father.

“The light at the end of the tunnel was, once all this was over, to get our friends and family together and finally celebrate our wedding, but it seems Sunwing doesn’t want it to happen,” she said.

“My Saskatchewan best friends received a notification on Thursday that their flights have been cancelled.”

In a news release issued Thursday, Sunwing announced it has cancelled all flights out of Saskatchewan’s two major cities until Feb. 3, effective immediately.

“Sunwing had initially planned to supplement seasonal demand for travel from Saskatoon and Regina with the assistance of temporary foreign pilots for the winter months,” the release said.

“When foreign pilot deployment was not agreed to, we brought in subservices to sustain our operations, however the conditions and schedule have proven too significant for our subserviced aircraft partners.”

Perry said missing out on her dream of “her father giving her away at her wedding” was already difficult to deal with, but now the airline is making things worse.

In May, the 36-year-old booked a variety of flights to Punta Cana for her 25 guests from across Canada. She said the process with Sunwing was an ordeal even back then.

“I lost out on lower prices as our Sunwing representative used to take a week to respond to our questions. The $500 increase on tickets made two other folks from Saskatchewan drop out,” she said

“On occasions, they misspelled names of our guests. All of it was still bearable, but the news of cancellations has me worried. There’s no accountability and it’s unnecessary stress.”

Perry said her $8,000 USD wedding service fee will go to waste if other guests drop too. She also has already paid for kennels for her pets.

Her sister, who has to fly out of Winnipeg, is also worried that the ripple effect of Sunwing Saskatchewan cancellations will crawl to other provinces.

“What if Winnipeg is next?” Perry said.

She is also worried about more Sunwing cancellations for her guests from other provinces.

“We’ll be there for a week. I want to go, but what if just like this week of horror stories we saw, my guests who are leaving behind their children in Canada get stuck there,” she said.

“My wedding dress is looking lonely right now. It wants to be somewhere warm with my family. I can’t even describe how frustrating it is. It might just end up just my fiancé and I there. It’s turning into a dark reality.”

Dianne Lepage, a resident of Bruno, Sask., said many people are in the same position.

Her 40th wedding anniversary, which was in 2020, went uncelebrated due to COVID-19.

“We started planning this trip in July 2022 and booked January 2 to 9 to fly to Cancun. It was a surprise Christmas present for our grandkids. None of our grandkids have ever been to Mexico and some have never been on a plane,” she said.

“Everyone was really excited. We are all really disappointed now.”

She said a lot of planning went into it and it is “not easy to rebook when 16 people are involved”.

In a written statement on Saturday morning, Sunwing told CBC that they are continuing to work through the backlogged flights in order to serve the remaining customers as soon as possible.

“We anticipate that most if not all delayed customers should return home by January 2nd. We have now planned 43 recovery flights, 34 of which were completed as of end of day yesterday, December 30th,” the statement read.

Read my statement on the cancellation of Sunwing flights at both the Regina and Saskatoon airports. <a href=”https://t.co/c8MVUtPowv”>pic.twitter.com/c8MVUtPowv</a>

On Friday morning, Premier Scott Moe called the cancellations a “very irresponsible decision” by Sunwing, particularly for those who are currently at their destination and unsure how and when they will get home.

“Saskatchewan’s Transportation Minister Jeremy Cockrill has been in contact with Sunwing and with federal Transport Minister Omar Alghabra asking for a detailed plan of how and when passengers who travelled from Saskatchewan will get back, which is the immediate priority,” the statement read.

“In the days ahead, we expect Sunwing to appropriately compensate everyone who did not receive the service they purchased.”

Biggar, Sask., resident Mat Danychuk was supposed to leave for Puerto Vallarta with his family on Dec. 25, but his flight got cancelled.

He was rebooked to fly out on Dec. 30, but it too was cancelled.

“We are not entitled to any compensation and [they’re] saying the weather didn’t allow travel, but everybody else was flying that day,” he said.

“We had a Christmas day supper in a hotel lobby.”

His family lost what they spent on hotels and kennel services.

Danychuk and his family intend on driving to Edmonton and flying to their destination from there.

“Sunwing is blaming it all on weather, but it’s mismanagement and they are not owning it.”