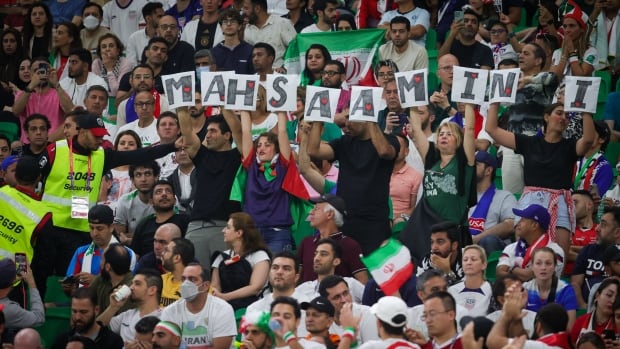 
This is a column by Shireen Ahmed, who writes opinion for CBC Sports. For more information about CBC’s Opinion section, please see the FAQ.

As the men’s World Cup final created excitement all over the world, there were reminders that this tournament was about something larger, such as interrogations of sport and society, human rights and the deliberate exclusion of specific marginalized groups.

Despite people who would prefer to not have their power challenged or disrupted, political expression has always played a role in sports, be it from an individual athlete, a team or a group of fans. People immersed in sports have the power to change the trajectory of society and we have seen it time and again.

Freedom of political expression is important and I firmly believe it is required in sports.

On Sept. 16, a 22-year-old Kurdish-Iranian woman named Mahsa Amini died while in custody of Iranian police. She was detained for not covering herself according to the standards of the country’s so-called morality police. After her death, riots and protests ensued. This civil unrest triggered protests from around the world with men and women demanding freedom for Iranian women.

Since the Iranian revolution in 1979, I have never witnessed attention to the rights of women in that country being magnified as they were in the past few months, via social media and protests. They need this solidarity. Like in many countries, women are often the backbone of grassroots political movements and change.

When I was in Qatar for the World Cup, I was intrigued by the number of people wearing shirts protesting against the regime in Iran. Before their first match, the Iran team did not sing the anthem and for many, that signified a powerful show of solidarity with the people at home. There were protests and disputes in the crowd as some supporters were confronted.

But since then the slogan “Zan Zindagi Azadi” — which translates to “Women Life Freedom” — has rung out all over the world.

While the focus of much of the world was on Doha and the matches, it was an important opportunity to educate the world about the on-goings of Iranian protestors and the brutality of the regime. But then came a not unexpected yet harmful distraction as FIFA president Gianni Infantino asked the world to leave politics out of the World Cup, which upset some people.

“It was disappointing for us that there was total silence from FIFA. They showed no support for Iranian fans,” one Iranian fan told me outside of a stadium.

Infantino’s statement can be interpreted as willfully ignorant, but also incredibly alarming for the head of the organization that represents the most popular sport in the world. Sure, athletes are being targeted, tortured and killed but hey, let’s focus on set pieces and game strategy.

I went to Iran’s second game, against Wales on Nov. 25, with a friend and devoted advocate of women’s rights in Iran. Sara (not her real name to protect her identity) is the founder of Open Stadiums, an organization that advocates for women’s access to football in public spaces.

Sara noted there were fewer signs of protest than at Iran’s first match, and believed it was due to a crackdown by Iranian authorities. She had concerns about cameras panning the crowds, and believed it was regime supporters or one of what she said was hundreds of Iranian plain-clothed officers identifying protesters.

Sara explained the bleak situation in Iran, where she said advocates for women’s rights are harassed by authorities, their families threatened and even if they aren’t put in jail, “they paralyze you with fear.” Those words are still haunting me.

The entire match was stressful because of her concern for the safety of fellow Iranians. Even getting tickets to the game was perilous.

“Qatar was a double-edged sword for Iranian protestors,” she said recently when I asked for her reflections. “Because of sanctions on Iran, they don’t have access to international credit cards and had to buy tickets through the federation. You have to use your national identity card and are completely exposed to the regime. It was super dangerous.”

By the time Sara and I watched Iran’s match against the U.S., there were hardly any signs or t-shirts with pro-women slogans. It was jarring to see so many Iranian flags but no public displays of protest. Sara believes Qatari police were working with the Iranian regime to eradicate any dissent in the stadiums.

As we sat in our seats, we watched security guards take signs away from one supporter sitting alone. They confiscated his small cardboard sign. At halftime, I asked him what was on it, and without making eye contact he said: “Freedom for my country.”

Perhaps the most famous Iranian in jeopardy is soccer player Amir Nasr-Azadani. He played with the Iranian Premier League and is charged in connection to the death of a Revolutionary Guard Corps Commander. His family maintains his innocence. Nasr-Azadani is accused of “moharebeh,” an enmity against God. It is punishable by death in Iran.

FIFPro, the international federation of footballers, is “shocked and sickened” by reports of his possible execution. Global music superstar Shakira pledged her support for Nasr-Azadani during Sunday’s World Cup final between Argentina and France.

Today at the final of the World Cup, I only hope the players on the field and the whole world remembers that there’s a man and fellow footballer called Amir Nasr, on death row, only for speaking in favor of Women’s rights. <a href=”https://t.co/VdMicGVaml”>pic.twitter.com/VdMicGVaml</a>

Understandably, many Iranians around the world are desperate for the safety of their people and the freedom of their homeland. It is important for sports media to continue to report on these issues. Just because the trophy has been raised and the tournament finished, we can’t ignore the plight of those being oppressed and those who continue to fight for basic freedom in sports and in life.

The news cycle might have finished, but the struggles of Iranian protesters continue. The sports world needs to continue to pay attention and intervene — set pieces or not.

Jordan Spieth on the joy of trash-talking Tiger Woods