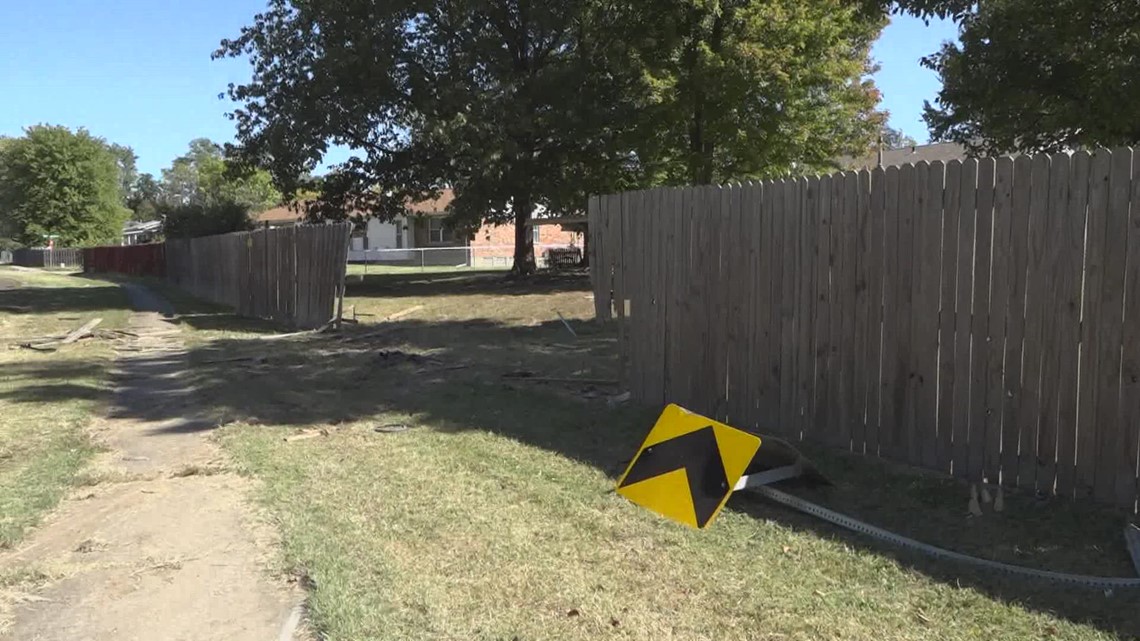 5 On Your Side got a response from the County’s Department of Transportation.

FLORISSANT, Mo. — A couple’s backyard in St. Louis County was unrecognizable on Tuesday days after it was struck by a speeding truck.

The back of Jeff Hornung and his wife’s house faces Vaile Avenue in Florrisant where the speed limit is 40 mph.

The couple told 5 On Your Side this was the fifth time in 15 years they have had to repair something on their property from it being crashed into.

They had to tiptoe through their yards to avoid shattered glass and debris left by a crash on their property shortly after midnight on Sunday.

Hornung said a Dodge super crew pickup traveling at a high rate of speed crashed through their wooden fence and struck a pole. He said the crash knocked out the power and scattered debris.

St. Louis County police said the vehicle was unattended when officers arrived and there were no reported injuries.

Meanwhile, a brake pad and wood sat on Hornung’s roof and a piece of his wire fence sat in a tree.

Out of the five times this happened, the couple said this was the first time a vehicle hit part of their home adjacent to the living room where they spend a lot of time. They were not home during the crash.

Hornung had put in calls to the St. Louis County Transportation Department to see what could be done to prevent this. He asked about barricades on the city’s end or installing one on his own property.

“The answer was they’ve done studies. There’s really nothing they can do. They won’t put a barricade on the outside. Apparently, we’re not legally allowed to put any type of barriers on the inside of their own property,” he said.

5 On Your Side also reached out to the County’s Department of Transportation.

A spokesperson responded they had not put up guardrails because they fear out-of-control drivers could hit them and bounce back into oncoming traffic.

They added the homeowner could put up barriers to protect his property as long as it complied with zoning regulations.

The full response from David G. Wrone, the public information manager of the St. Louis County’s Department of Transportation and Public Works is as follows:

“DOT hasn’t erected guardrails at this location because of the potential for errant motorists striking it and ricocheting back onto the pavement, into oncoming traffic. We typically install guardrails to prevent motorists that veer off the road from hurtling into a ravine, creek bed, down a hillside, etc.

“We would NOT have forbidden the resident from installing a barrier/barricade on his own property, because we have no authority to do so. So long as the barricade in question is off our right of way and in compliance with local zoning regulations, the resident can install barricades/barriers on his property to protect himself, his family and his home.

“Our traffic studies personnel are investigating the most recent crash mentioned in your email. Please be advised that significant DOT signage is already in place on and near the curve in question.”

Hornung is frustrated that this is his problem.

“We shouldn’t have to install a barricade. Speed enforcement or actual punishment of the ever-increasing bad drivers is the real issue here,” Hornung said.

5 On Your Side has put in a request to see how many incidents have occurred along the road in the last ten years.

What both sides of gun-control issue want to see from N.S. shooting inquiry