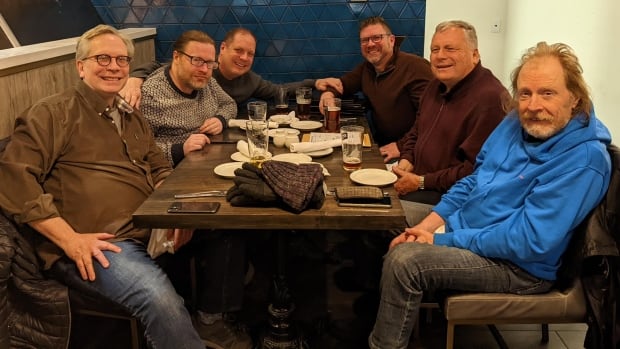 Before Jonathan Lewis was charged in the death of his father — Teenage Head guitarist Gord Lewis — he was convicted of harassment, had a history of messaging people around the city and, according to his lawyer, lived with mental health issues.

Gord, the 65-year-old guitarist of the renowned Hamilton punk rock band, was found dead on Aug. 7 in his apartment.

Police confirmed the next day Jonathan, 41, had been charged with second-degree murder.

While the charge hasn’t been tested in court, it has prompted people who saw Jonathan struggle with his mental health to reflect on whether he needed more support or intervention.

Larissa Fedak, Jonathan’s lawyer, said the situation is tragic, but there are still many questions about how Gord died.

“Everyone’s jumping to certain conclusions and that’s unusual,” she said. “Maybe because of the status of his father or simply because he was kind of known in our community … he’s innocent until proven guilty.”

Brian Lewis, one of Gord’s brothers, declined to comment, but previously said the family was “devastated and conflicted” because “it’s the loss of a beloved brother and a very complicated situation.”

Accused was convicted before

In Jonathan’s case, he was known to have sent insulting and seemingly threatening emails and social media messages to people, many in Hamilton, over a series of at least eight years.

A chain of incoherent emails from accounts with the name Jonathan Lewis were sent to numerous media outlets on Aug. 7 and led someone to approach the police.

“Funeral people need to get here quick. My Dad is starting to decay,” read part of the email on Aug. 7, which CBC Hamilton staff also received.

It wasn’t the first time behaviour linked to Jonathan has led to calls to police.

CBC Hamilton news staff filed a police report around 2019, after Jonathan sent emails perceived to be threatening to a former reporter. He had also visited the newsroom looking for that reporter, banging aggressively on the front windows. No charges were laid.

Court documents show Jonathan was charged and convicted for sending Matthew Green, a former city councillor and now Hamilton Centre MP, messages that would cause the politician to “reasonably, in all circumstances, fear for his safety” over a two-week period in 2017.

Jonathan received a suspended sentence and three years of probation.

Fedak said she also represented Jonathan back in 2012 over a “modest” incident, and said in this case, “mental health certainly is a factor.”

‘It freaks you out’

After the charges relating to Gord’s death were laid in August, CBC Hamilton spoke to several people who said they contacted police in the past about Jonathan.

Hamilton police said Jonathan was known to police, but wouldn’t offer specific information about someone’s criminal history and wouldn’t answer other questions as the case is before the courts.

Laura Farr, a former city staff member who is now running for Ward 3 councillor in the Oct. 24 municipal election, said in November 2017 she and numerous others received harassing emails and Facebook messages from Jonathan.

One apparent message, viewed by CBC Hamilton, appears to show him telling her he hoped she would end up in a relationship with a man who would abuse her and end her “f***ing life.”

Farr said she reported it to police but no charges were laid.

Farr said police thanked her for the report, but she said their response wasn’t enough to make her feel safe.

Jamie Tennant, a local writer and the program director at 93.3 CFMU-FM at McMaster University, said he reported Jonathan to police over threatening messages he received.

“It freaks you out,” he said in a phone interview with CBC Hamilton.

Tennant said the messages started in 2014 after Jonathan reportedly had an argument with a host at the radio station. In 2016, Tennant sent a four-page letter to police, outlining apparent messages and behaviours by Jonathan.

The letter and some of the messages in it were viewed by CBC Hamilton, and appear to include threats to shoot up the radio station and veiled threats toward Tennant and his family.

“Don’t play Teenage Head on CFMU. I will come down there and I will [go to] jail to prove my point,” read one apparent message from late December in 2015.

Tennant said he went to police numerous times about Jonathan. No charges were laid.

“I was never updated on what happened really, but I do believe they went by his place once after my first complaint to tell him to let it go,” he told CBC Hamilton.

Const. Indy Bharaj said in a phone interview that police couldn’t charge Jonathan with harassment in 2016 because “there was so much back and forth between Tennant and Lewis.”

Farr and Tennant said they both feel the situation highlights gaps in the justice system and mental health supports.

“It’s definitely a systemic problem. For a long time, I was angry with police … but now I can’t help but think it’s bigger than that,” Tennant said, “that they sincerely were looking at what was happening and saying, ‘There’s really nothing we can do.’

“It strikes me as incredibly bizarre he couldn’t have been helped,” Tennant said.

She said some people, for example, can be delusional, but still do day-to-day functions and articulate their feelings.

“It’s a judgment call by each of those professionals, and 95 per cent of the time, they do the right thing. It’s a few people who don’t look that bad who then go to do something quite tragic,” she said.

Brown, who has no involvement with the case, viewed some messages sent to Tennant that were allegedly written by Jonathan, and said police would have had enough to lay charges — but it’s unclear what that would achieve.

“All the courts could’ve done is held him accountable for that action, but somebody who is dealing with mental health issues isn’t going to find the help they need in the criminal justice system,” he said.

St. Joseph’s Healthcare Hamilton has a forensic psychiatry program that provides mental health support for people who are found not criminally responsible for a crime due to their mental health, and for people not fit to stand trial.

Program head Dr. Gary Chaimowitz told CBC Hamilton that people with mental health problems who do not qualify for that specific program would have access to other services, but the mental health system is under “an incredible amount of stress.”

Fedak, speaking in general terms and not about Jonathan, said the pandemic has also created a “perfect storm” for people who have serious mental health issues and don’t have a criminal history.

Brown said there are some options, like mental health diversion programs, which see people have their charges dropped if they complete treatment, but those programs are optional.

He said there’s a lack of awareness of such programs, and a lack of funding and availability for them, as well as accessibility issues, given the programs were remote during the pandemic.

Brown added there have been cuts to legal aid, which also makes it harder to access these services, and the justice system itself is “in crisis.”

“It’s going to take some sort of public acknowledgement to fix it because the governments certainly aren’t motivated to fund it,” Brown said.

“It’s crumbling beneath our feet and right before our eyes, and something needs to be done in a drastic way to improve the situation.”

Words of wisdom from the streams of Appalachia