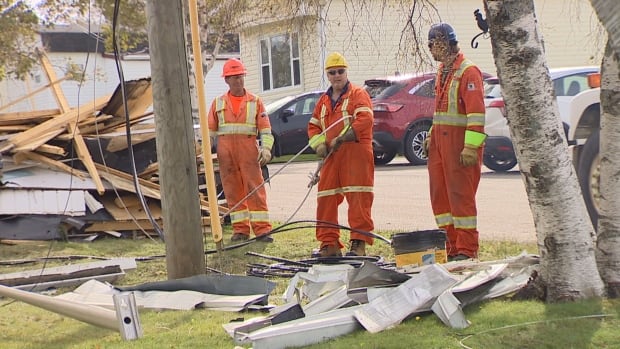 Some on P.E.I. won’t get electricity until Sunday


About 13,000 customers of Maritime Electric, P.E.I.’s main utility, still don’t have power 11 days after post-tropical storm Fiona struck, and a significant portion won’t get it before Sunday.

Maritime Electric released a list Monday afternoon of communities and neighbourhoods still out and when it expects to restore power to them.

Charlottetown has the largest number of outages, with 6,720 listed as out in four separate neighbourhoods. With an average of 2.3 people per household, that represents about 15,000 people. Maritime Electric expects to restore power in Hillsborough Park and Parkdale Tuesday, and in Upper Queen and Brighton on Wednesday.

Cornwall still has more than 1,000 out, but those should be restored Tuesday. In the Keppoch area of Stratford about 1,200 customers will have to wait until Wednesday.

About 800 customers in the Argyle Shore, Canoe Cove, Rice Point area will have to wait until Sunday.

Here is where you can find the full list of communities and neighbourhoods.

Maritime Electric spokesperson Kim Griffin said the list was difficult to put together, because repairs can sometimes take longer than expected.

“Some pockets that should have taken us a day were taking us two or three days,” said Griffin.

“It was part art and science. It may not be perfect.”

When arriving on site, crews may find trees on closer inspection that need to come down, and she said that can take more time. There may also be telecommunication lines or poles that are down that need to be cleared.

Maritime Electric estimates there are about 10,000 individual outages in the province, but expects many of them will also be restored by Sunday.

Prime Minister Justin Trudeau is in Nova Scotia on Tuesday, and is expected to make an announcement about a federal relief package at 11:30 a.m. AT.

Most students returned to classes Monday, and more will be back Tuesday.

Those that remain closed are:

Students from Cardigan Consolidated will be back in class, but they will be at Montague Regional High School. École Évangéline students are being relocated to L’Exposition Agricole et le Festival Acadien grounds, but no start date for them has been announced.

Southern Kings Consolidated is delaying opening for one hour Tuesday because of an unplanned power outage.