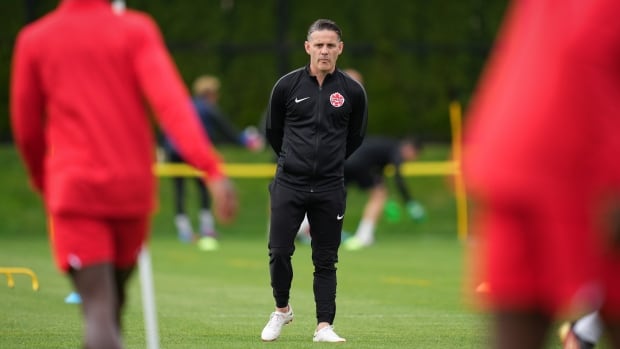 
Richie Laryea and his Canadian men’s soccer teammates are just a few weeks away from making coach John Herdman’s “crazy thought” a reality when they take the field at the FIFA World Cup in Qatar.

That’s how the 27-year-old Toronto native described Herdman’s approach when he took over as coach of the men’s team in 2018. The men’s team hadn’t qualified for the tournament since 1986.

“He was telling guys we’re going to go to 2022 World Cup … and I think guys just started, ‘ok, this is it, we’re going to go for it,” Laryea told Andi Petrillo in the debut episode of CBC Sports new show, Soccer North. Hosted by Andi Petrillo, the show airs every Friday on CBC Gem, CBCSports.ca and the CBC Sports YouTube channel. During the World Cup, the show will air live following all of Canada’s games for as long it remains in the tournament.

“It was maybe a crazy thought in 2018 when he took over, but became a reality for us. I think the group we have a lot of very eager, hungry players.”

Under Herdman’s guidance, Canada finished first in the CONCAFAF group, defeating higher-ranked teams such as the U.S. and Mexico along the way.

Laryea said the team and its players had something to prove during the qualifying process, and they are taking that same attitude into the World Cup. They play their first game against Belgium on Nov. 23.

“We want to show that not only can we beat teams like that, but also compete with their best players and show that we deserve to have the exact same pressure and limelight that those guys have,” Laryea told Petrillo.

Also on Episode 1 is an interview with soccer analyst Jim Brennan, who told Petrillo that while some of Canada’s players are dealing with either injuries or lack of playing time, it shouldn’t be a big issue going into the tournament.

“Every professional footballer’s dream is to get to a World Cup and play in a World Cup,” Brennan said. “The national team will have a plan in place, but I’m sure on the side those players will be out running every day, be in the gym every single day to keep themselves going, because they want to be a part of this squad that’s going to this World Cup.”

Host Andi Petrillo gets you caught up on the week that was in the world of soccer, featuring special guests and Canada Soccer’s right-back Richie Laryea.