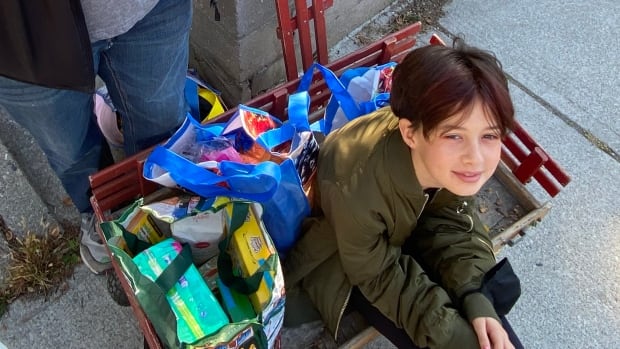 The Current56:45The skyrocketing cost of food — and who or what is to blame

With food prices soaring, Toronto resident Jason Gemmill carefully plans his family’s meals a week in advance, and uses apps to sniff out deals before he even sets out for the grocery store.

“I’ll go through the local flier for the store we’re about to go to, and see what’s on sale there, and that kind of informs the meal choices,” Gemmill told The Current’s Matt Galloway.

“Occasionally there’ll be something out of the ordinary that we’ll have to pay whatever price it is — but typically it’s sales,” he said.

Gemmill and his wife both work, and budget $110 a week on food to feed themselves and their two children, aged 11 and 15.

While accompanied by The Current on a recent shopping trip, he noticed price increases on vegetable oil and meat. But even with a carefully planned shopping list, he had to put back pepperettes he was buying for his kids’ lunchboxes because the price in store was higher than advertised.

“The app lied to me, we’re not going to buy those today. Like these are $11 … double digits is a little much for something like that, so we’ll skip that this week,” he said.

Food prices in Canada rose at the fastest pace since 1981, despite Statistics Canada’s latest figures showing overall inflation cooling down for the third month in a row.

Food prices continued to rise in September at an inflation rate of 11.4 per cent, even as Canada’s overall rate of inflation slowed for the third month in a row. The figures from Statistics Canada put food inflation at twice the overall inflation rate, and the fastest pace of increase since August 1981.

Economist Jim Stanford said higher prices are being driven by several factors: supply chain interruptions during the pandemic; the impact of climate change on agriculture; and the war in Ukraine’s effect on energy prices.

“Then on top of it all, there’s a great big layer of cream that the supermarkets themselves are collecting. Profits in food retailing are up very, very strongly compared to pre-COVID times,” said Stanford, an economist and director of the Centre for Future Work.

In the most recently completed quarter, Canada’s three biggest grocery chains have all posted profit increases of tens of millions, compared with the same period pre-pandemic in 2019.

While not all those profits derive from food sales, the figures have bolstered accusations of profiteering against Loblaw Companies Ltd., (which operates Loblaws, Zehrs, No Frills and Real Canadian Superstore); Metro Inc. (which owns Metro, Food Basics and other brands); and Empire Co., (owner of Sobeys, IGA, Safeway, Farm Boy, Foodland, FreshCo and other brands).

The Current requested interviews with the heads of Loblaw, Metro, and Empire multiple times. All requests were declined.

Stanford said grocery chains face increased costs from manufacturers and suppliers, who are also on average posting increased profits. But he argued that some large grocery chains are “passing on their costs — and then some” to consumers.

“I’m not saying that their greed has sparked the whole problem … but their greed is certainly present in the increased profits that they’re generating through this inflationary episode.”

Stanford described Canada’s supermarket industry as “a cosy oligopoly” — or a market dominated by a small number of suppliers.

“Three major chains have a dominant market share, and they are able to exercise price power both over consumers, but also over their own suppliers and their own workers,” he said.

WATCH | Are the grocery giants gouging us?

Are the grocery giants gouging us?

Sylvain Charlebois, Director of Agri-Food Analytics Lab at Dalhousie University, says costs for the big grocery chains have legitimately gone up, but the industry as a whole is taking a lot of heat from consumers for higher food prices right now.

That kind of market concentration can often lead to higher prices, said Phoebe Stephens, an assistant professor in food security and sustainable agriculture at Dalhousie University.

“When you have few players, companies can match each other’s price increases rather than competing with them,” she said.

On Oct. 17, the federal agriculture committee recently passed a motion calling for an investigation into grocery store profits — which could see CEOs of the three major chains appear before the committee to answer questions.

On Monday the Competition Bureau, Canada’s consumer watchdog, also announced that it will investigate the sector, with a view to recommending measures to improve competition in the sector.

The Current requested an interview with the Competition Bureau, but the request was declined — as was a request for interview with Finance Minister Chrystia Freeland.

Why do we have the essentials of life in our economy priced according to whatever a private company thinks they can sell it for?– Jim Stanford

Simon Somogyi, a professor and Arrell Chair in the Business of Food at University of Guelph, said “it’s hard to definitively say” whether the big chains have taken advantage of widespread inflation to charge customers more.

Understanding the overall profitability would require looking at individual products, supplier costs and mark-ups, in order to understand the profit margins generated, he said.

“That’s not available in the public sphere and investigations should take place to see exactly what that is,” he said.

Somogyi isn’t confident that the Competition Bureau can bring about huge change, but thinks it’s an opportunity to look at the surging profits and the impact on consumers across many sectors.

“Will the Competition Bureau be able to bring in more grocers? No. Will it be able to set prices for consumers? No,” he said.

“But it would be good if it was looking into profitability across all different types of businesses, because … this isn’t just an isolated case. It’s a trend.”

Canada’s consumer watchdog says it will study competition in the grocery industry and whether having more retail competitors could push back on price increases. But some industry experts say the issue goes deeper than how many grocery chains there are.

Powers to break up companies

Stanford said the spike in corporate profits, while consumers are struggling, also prompts some bigger questions.

“The reality is we have an economic system where we empower private companies to charge whatever the market will bear. And some people think that’s natural and healthy. Some people think it’s greedy,” he said.

“I think we should ask a fundamental question: why do we have the essentials of life in our economy priced according to whatever a private company thinks they can sell it for?”

He would like to see the powers of competition regulators strengthened, including “penalties for collusive behaviour, but also even things like breaking up large companies that have too much power.”

He also wants to see people protected from inflation as it happens, by keeping wages in line with rising prices, and income-support programmes for low-income households.

And if necessary through taxation, “take some of those profits and give it back to the consumers whose higher-than-normal payments explain those profits,” he said.

“I think there’s a lot of different ways to go at it. None of them easy, none of them magic bullets.”