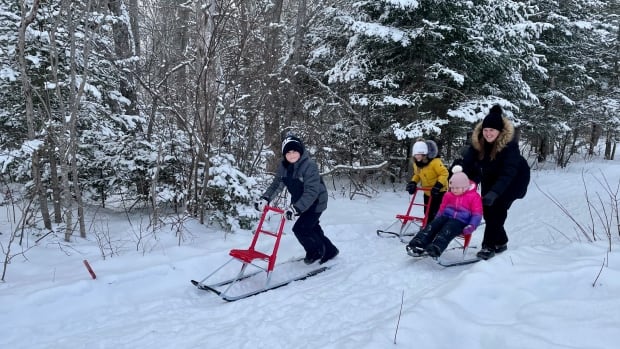 Snow kicksleds from Finland catching on in rural N.B. community


A popular Scandinavian activity rare in Canada is starting up on the snowy trails of southeastern New Brunswick.

Residents of Beaubassin-Est and Cap-Pelé can now borrow kicksleds to slide on packed snow after winter storms. Similar to a dogsled, but human-propelled, the sleds have two skis and a seat in the front.

Pete Belliveau, community development officer for Beaubassin-Est, said people have been curious to try it out, and the sleds quickly became “very popular.”

“It caught on very, very fast because people saw people with them and word of mouth,” he said.

“At the end of three days when they bring them back, I have another list of people or families waiting to pick them up. Because it’s new and it’s kind of cool.”

The municipality of Beaubassin-Est, a rural community about 30 kilometres east of Moncton, purchased a fleet of 14 sleds this year after receiving a provincial grant.

They’re free to use and can be borrowed for three days at a time.

The idea came from Mayor Louise Landry, who purchased some sleds for herself and thought they would be a great addition to an existing snowshoe rental program.

Beaubassin-Est, with a population of about 6,400, is believed to be the first community in New Brunswick to start a kicksled rental program — and is drawing interest from other municipalities.

Why snow kicksleds are getting traction in New Brunswick

Beaubassin-Est is believed to be the first municipality in the province to purchase a fleet of Finnish sleds for residents to borrow. Now, they’re planning to buy more. 2:09

The sleds purchased by the town are built by hand in a village in Finland and were purchased from a Quebec company that imports them. There are different sizes for children and adults, and they cost about $500 each.

They can be used on hard surfaces, including packed snow and ice. One foot stays on a ski and the other foot kicks to push off and send the sled sliding forward.

In Scandinavia, they’re used as a form of transportation and to buy groceries in more remote areas.

Belliveau said they’re a perfect fit for New Brunswick winters and a great form of exercise. He expects kicksledding to continue to grow in popularity.

“It’s something new compared to snowshoes or cross-country skiing, and it’s a great family event,” he said. “You can go with a family of four and you just need two sleds, the two young ones can sit and the parents can push.”

“At first I didn’t know too much what it was,” she said. “But when we rented them we really had a blast. It was really fun.”

With significant snowfall in the past two weeks, there’s been plenty of cover on trails and in the woods for venturing out on the kicksleds. They work best on packed snow so conditions have been perfect.

Dallaire said her two kids, ages five and three, have enjoyed taking them out on groomed trails. It’s been quick to pick up, with learning how to steer the only challenge at first.

“It’s fun exercise for them and it goes quicker than walking and snowshoeing, so for them they like it better,” she said.

As more kicksleds are spotted out and about, interest is continuing to grow.

The municipality plans to hopefully purchase an additional 14 sleds next winter and offer harnesses for people interested in dog sledding.