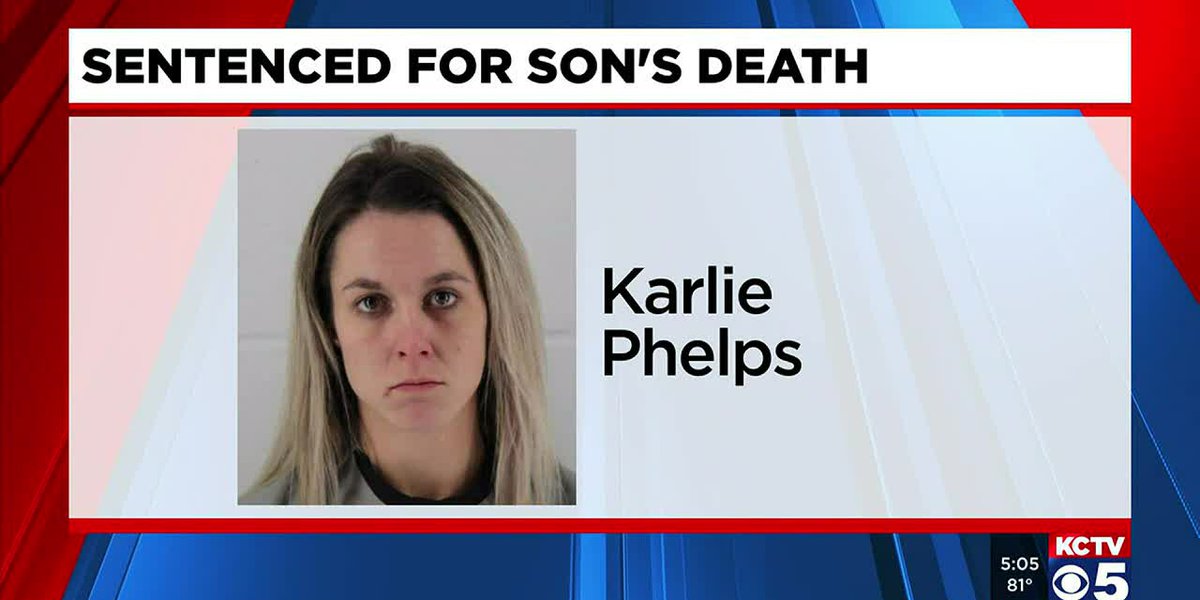 
OLATHE, Kan. (KCTV) – A Shawnee woman whose toddler was killed in an arson fire while she was out buying drugs may avoid prison time due to a surprising sentence from a judge.

Karlie Phelps pleaded guilty in August to involuntary manslaughter and child endangerment in the February death of her 17-month-old son.

Prosecutors recommended a sentence of 10 years in prison.

On Thursday morning, Johnson County District Court Judge Timothy McCarthy sentenced her to 216 months (18 years) in prison but then granted a defense request for “dispositional departure” and placed Phelps on 36 months (3 years) of probation. If she violates her probation, a judge could still make her serve the underlying 18-year-prison sentence.

Johnson County District Attorney Steve Howe said he respects the judge’s decision but is deeply disappointed by it.

“These types of cases do bother the prosecutors in this office because the young child lost their life,” said Howe. “That’s why we feel very strongly about making the recommendations we did, because we’re the only voice for that child.”

Phelps’ 17-month-old son, Nicholas Ecker, died in a fire that his father, Phelps’ ex, is accused of setting intentionally as revenge.

The father, also named Nicholas Ecker, pleaded not guilty to murder and arson charges and has yet to face trial.

Crews responded at 12:54 a.m. on Feb. 13 to a house on West 69th Terrace near Larsen Lane in Shawnee and found the single-family home engulfed in flames. While searching the house, firefighters found a young child’s body in a crib in a downstairs bedroom, according to court documents.

An autopsy revealed the toddler was still alive as the fire raged, as indicated by his lungs being “full of soot,” according to the medical examiner. The child suffered severe burns throughout his body.

As the house was burning, Phelps was out in KCK buying OxyContin. Her son was found dead in his crib. In arguing for prison time, the prosecutors noted that she had 21 previous convictions and continued to use illegal drugs after he died.

“A small child, very young child, is left at home alone. And then, after the child was killed, she continued to use drugs even after that. And that was, again, one of the aggravating factors that we talked about in court today,” said Howe.

Howe said he was troubled that often child deaths and child endangerment he prosecutes are linked to opiate addiction.

“We’ve seen again and again — whether it’s heroin or oxycontin or fentanyl — those drugs, people become highly addicted to those and those [drugs] are more important [to them] than anything else in the world. And that’s what’s really troubling, is the increases of those drugs in our community right now is substantial,” Howe remarked.

He said the medical examiner and medical director recently told him they experience one overdose per day from heroin and fentanyl, which is often marketed as Oxy. Not all we’re deadly, but he posited that were it not for Narcan, far more of them would.

“The numbers are going through the roof here in Johnson County and people do not realize that OxyContin and heroin, and especially fentanyl, is spiking significantly in our community. And it’s only going to get worse. We need to figure out how to combat it,” Howe continued.

Phelps’ probation terms require she start out at a residential treatment center where she must stay overnight and can leave only with permission of her probation officers.

“And one of the conditions, of course, is that she not use any illegal drugs, which has been really a problem for her,” Howe remarked.

Ecker’s next court hearing is set for Sept. 21 at 11 a.m. in Johnson County. He remains in the Johnson County jail on a $1.1 million bond. His case is assigned to the same judge as the one who granted probation for Phelps.