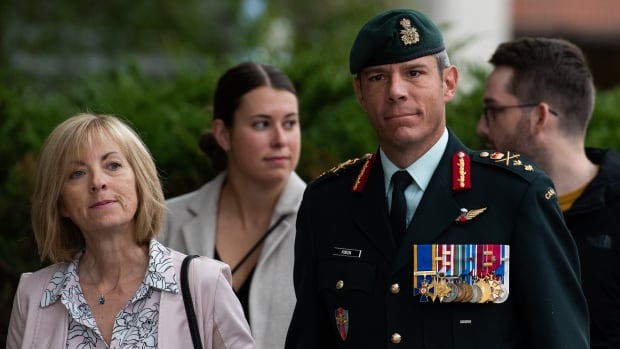 Fortin, who has maintained his innocence, will have to wait until early December before a decision is rendered by a civilian judge.

Her name and details that could identify her are protected under a publication ban.

She told the court that she is certain “without a doubt” that the perpetrator was Fortin, with whom she was attending military college at the time in St-Jean-sur-Richelieu, Que.

In a closing statement Tuesday, Crown prosecutor Diane Legault argued that there is no reason to believe the complainant in the case would have forgotten or become mistaken about the identity of her aggressor in the years since the 1988 incident.

She pointed out that Fortin was able to identify names and faces with certainty when looking at old yearbook photos from military college during his testimony on Monday.

“It’s not as if she decided 34 years later that it was this person because she saw him on television,” Legault said in French, calling back to Fortin’s testimony about the number of press conferences that he was attending in early 2021.

“That day, she knew right away that it was Mr. Fortin. There’s no reason for that to have changed over the years.”

Legault also questioned the defence’s assertion that anybody could have committed the assault, noting that the black-and-white photographs made male students resemble one another but that colour photos from the era showed more variation in their appearance.

Legault said the woman waited to bring forward a complaint because of a “boys’ club” mentality in the military.

The complainant testified that she was aware of how such complaints were handled by the Armed Forces at the time, and that knowledge deterred her from wanting anyone to know what happened.

It was only after she had retired and no longer feared career repercussions that she brought the incident forward in 2021, the prosecutor said.

On Monday, Fortin’s defence lawyer, Isabel Schurman, asked the judge for an acquittal. She said the complainant’s testimony lacked credibility and other witnesses failed to shore up some of the details of her story.

A key point for the defence was that while the complainant said she told her ex-boyfriend about the incident immediately afterward, he told the court that he had no memory of such a conversation.

In her closing argument, Schurman also pointed out multiple inconsistencies between the complainant’s testimony on the stand in September and her previous statements to investigators last year.

The inconsistencies included details of the assault itself, Schurman said, including whether the assailant had touched her genitalia and whether he had spoken during the incident.

But Legault countered on Tuesday that the witness remained steadfast on three points — that the attacker placed her hand on his penis, that the act was not consensual and that she recognized him as Fortin.

Legault said that although Fortin denied having committed the crime, nothing else in his testimony specifically contradicted what the complainant said about the extent to which the two knew each other, the campus of the military college or the setup of the barracks where the students slept.

She said the defence had not produced any evidence to suggest that the complainant had a reason to lie about what happened to her or who did it.

Schurman rebutted that point on Tuesday, saying that determining the complainant’s motivations is not part of the burden placed on the defence, and it inappropriately displaces the presumption of innocence away from the accused.

There is no jury in the trial. Judge Richard Meredith is expected to render a decision on Dec. 5.

Fortin, who was removed from his position in charge of the COVID-19 vaccine campaign in May 2021 during an investigation of the allegation, is separately challenging that dismissal in Federal Court.

New drug may be best treatment for leukemia yet