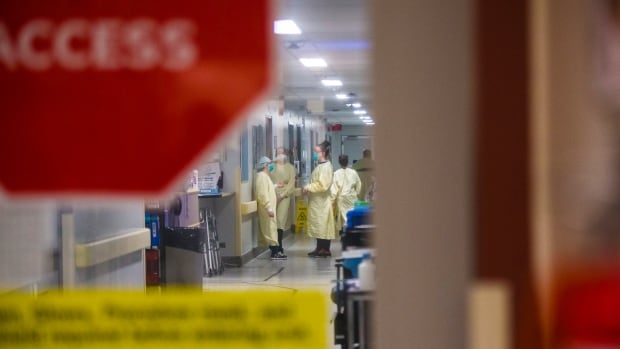 
Twelve people on stretchers, including a stroke patient with a brain bleed and a trauma patient transported by helicopter, were lined up in the entrance hallway at Manitoba’s largest emergency department on Sunday evening because no beds were available inside, a physician at the hospital said.

A shortage of treatment capacity at Health Sciences Centre has forced patients sick enough to require hospital admission to wait as long as 170 hours — more than a week — in the emergency ward for a bed to open up elsewhere in the hospital, the doctor said.

This, in turn, forced even severely injured patients to wait for hours on Sunday evening in the narrow, inclined passageway between HSC emergency’s ambulance drop-off zone and the triage desk inside the waiting room.

“The standard of care that we’re able to provide patients is not what I would expect and is approaching a level of danger and this weekend, I think, crossed over into collapse.”

On Sunday evening, there were no beds available for patients to be seen and treated in emergency, said the HSC doctor, who described a severe shortage of nurses available to care for patients elsewhere in the hospital.

“It’s partially the lack of medicine beds. It was also a lack of surgery beds and trauma beds. There were patients who’ve been waiting for beds more than 170 hours,” the doctor said.

The doctor said HSC’s emergency department needs an emergency deployment of nurses from elsewhere in the hospital system to attend to patients in medicine and surgery beds.

“I understand that the entire system is strained, but at the moment the Health Sciences Centre emergency department has zero capacity to actually treat patients,” the doctor said.

Two other doctors confirmed there were no beds at HSC’s emergency department on Sunday evening.

Doctors at Grace and St. Boniface said while the patient situation was not as severe at their emergency departments, there remained a shortage of capacity to treat patients.

Manitoba Shared Health confirmed the situation at HSC was the most serious on Sunday. The provincial agency said while HSC “saw significant demand” over the weekend, it blamed the pile-up of patients on an unusual number of extremely ill or injured people seeking medical care.

“The demand from these high-need patients was beyond levels seen in the ED in recent months, with more than one instance of multiple patients arriving simultaneously who required care in a resuscitation room,” spokesperson Kevin Engstrom said in a statement.

“As a result, there were periods of time during the weekend when there were more patients concurrently receiving this level of care than usual.”

Engstrom described the overall patient numbers at HSC on Sunday as “not unprecedented” even though the number of serious patients was unusual.

The HSC doctor said they have never seen such a situation.

“Every physician I talked to and every nurse I talked to this weekend believed that it was unprecedented. I would say that it is difficult to argue with an EMS hallway which is full, and I mean physically full,” the physician said.

“It is hard to argue with hallway medicine in the emergency department.”