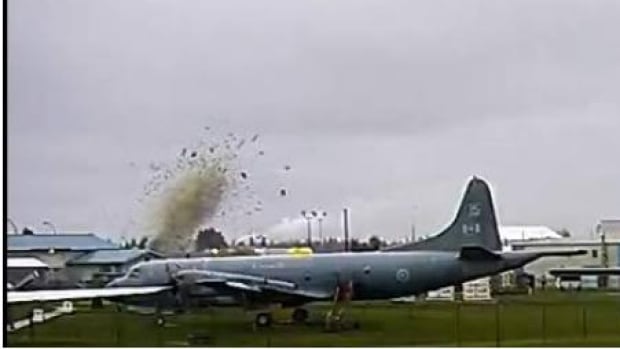 
An investigation into an explosion at a Vancouver Island military base last year has found that contractors working near a live natural gas line misunderstood the risk of a blast.

The explosion happened on Nov. 18, 2021 at Canadian Forces Base Comox — also known as 19 Wing Comox — and left 28 people injured, including six civilians and multiple members of the military.

Technical Safety B.C. (TSBC), a regulator of technical systems and equipment in the province, released a report into the incident last week.

It found that the explosion — which was caught on the military airfield’s camera and threw debris more than 100 metres from its epicentre — was caused by an excavator accidentally severing a gas line.

The excavator was being operated by a contracting company that is unnamed in the report and was at the military base installing a perimeter drain around the barracks.

“No actions were taken prior to the excavation work commencing to anticipate for an accidental gas release,” reads the TSBC report.

“There was no spotter directly observing the excavator work at the time. The excavator bucket contacted the gas line where it re-entered the ground, severing it completely.”

After the line was severed, gas leaked into a nearby mechanical room through an open door. The explosion happened approximately 10 or 15 minutes later, according to the report.

Once the gas accumulated to explosive concentrations, it met an ignition source and caused the barracks to blow up. It happened before the barracks and mechanical room were fully evacuated. One of the people caught in the blast was injured seriously enough to require an airlift to a nearby hospital, though the report notes their injury was “moderate,” and the other injuries were minor.

CBC News has asked WorkSafeBC, B.C.’s workplace regulator, if any fines were levied in the incident.

The report says one of the factors that contributed to the explosion was that the contractors, including the site supervisor, did not understand the risks of severing the gas line.

According to the report, the contracting company had earlier identified the gas line and a worker had exposed it by hand.

However, the report notes that B.C.’s regulation and guidelines “are focused on prevention of damage through identification and exposure of gas lines and [have] not been found to directly consider explosion risks.”

The excavator operator quoted in the report says they believed they had “done everything right” after exposing the gas line, and they did not know how or why the line was cut.

In a statement to TSBC, the site supervisor is quoted as saying that “they [the supervisor] were told the risk of ignition of a gas leak is one in a million and it can’t ignite.”

“Gas lines get hit all over Vancouver Island all the time, multiple times a week … and nothing ever blows up, ever,” the supervisor is quoted as saying, going on to state they do not understand how the building exploded.

The leader of incident investigations at TSBC, Ryan Hazlett, said in a statement that the incident demonstrates the need for education and awareness for people working around gas lines.

“We are urging workers and those undertaking DIY excavation to better understand the risks involved with digging near gas lines and the extra precautions they can take once gas lines are exposed,” he said.

The authority says there should be a plan in case an explosion or leak occurs after a gas line is exposed.

No damage occurred to aircraft or air field facilities, but the report notes “extensive damage” to the barracks building, which was built at least 60 years ago.

A spokesperson for Canada’s Defence Department told CBC News that the estimated cost to replace the building is $8 million, plus approximately $300,000 in deconstruction costs.