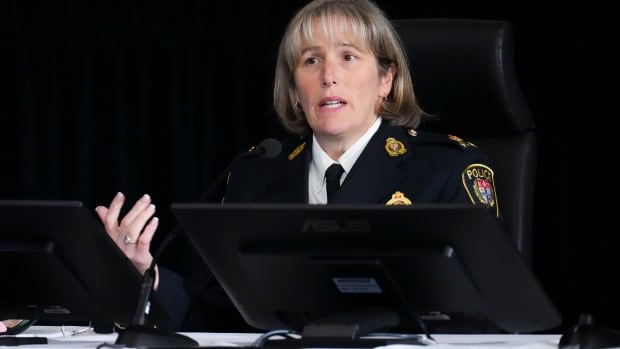 
A senior member with the Ottawa Police Service says the force should have taken the intelligence that suggested the Freedom Convoy protesters planned to stay past two days more seriously.

Patricia Ferguson, acting deputy chief of Ottawa police, made the admission while testifying before the Public Order Emergency Commission on Thursday. The commission is studying whether the federal government’s decision to invoke the Emergencies Act to move the protesters was justified.

One of the issues the public inquiry has been digging into is whether Ottawa police shrugged off signs that the protesters planned to entrench themselves.

On Wednesday, the inquiry heard that the Ontario Provincial Police’s intelligence bureau said that in early January, it flagged that a mass anti-government protest could be headed to Ottawa.

Evidence presented at the commission also showed that police and city officials had received a warning from the Ottawa Gatineau Hotel Association that someone from the Canada United Truckers Convoy had reached out looking to book hotel rooms for at least 30 days.

But the Ottawa police were under the assumption the crowds would clear after the first weekend.

“In hindsight, what would you have done differently in this planning phase,” asked commission lawyer Frank Au.

“I suppose we would have given more credibility to the information and the intelligence telling us there was a faction that [they] were planning on staying for a much longer period of time,” responded Ferguson.

Ferguson, who was in charge of community policing at the time, said the Ottawa police’s original contingency plan only extended to Monday at noon.

They still didn’t have a new plan by Feb. 4,  a week after protesters and their vehicles had first rolled into the city, because the force was “putting out fires” and dealing with staffing, Ferguson testified.

She said leading up to the first weekend, staffing at the Ottawa police was hindered by sickness and leave.

The force was “on our knees,” said Ferguson.