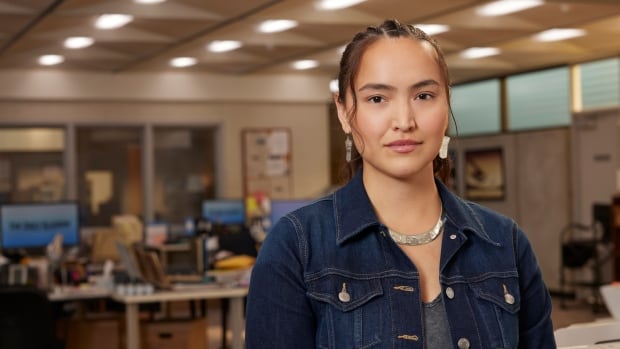 
Secwépemc actor Grace Dove’s latest role is hitting close to home — even if the setting is a bit further north.

A graduate of Kelly Road Secondary in Prince George, B.C., Dove already has quite a few credits to her name and is now starring in the ABC drama Alaska Daily, where she shares the prime time screen with Academy Award-winning actress Hilary Swank.

Dove, who told CBC’s Carolina de Ryk, she once considered a career in journalism, said the role and the stories her character is trying to tell, are a perfect fit for her. Dove said she welcomes the opportunity to shed light on issues facing Indigenous women to audiences across North America.

“I really think it’s meant to be,” said Dove. “Growing up along the Highway of Tears in Prince George, MMIWG has been a very personal part of my life, of my family’s and of my people’s.”

According to the Native Women’s Association of Canada, Indigenous women accounted for 24 per cent of all female homicides in Canada between 2015 and 2020 despite making up only five per cent of the country’s female population.

The final report of the National Inquiry into Missing and Murdered Indigenous Women and Girls found that the violence experienced by Indigenous women, girls and gender diverse people amounts to genocide.

In the United States, statistics are harder to find.

Research published in 2018 from the Urban Indian Health Institute showed that the National Crime Information Center had reported 5,712 missing American Indian and Alaska Native women and girls in 2016, but the U.S. Department of Justice’s federal missing persons database, NamUS, logged only 116 cases.

Dove has been in the acting game for at least a decade. She said if you’d told her at the beginning of her career that MMIWG would be addressed on network television, she would have had trouble believing it.

The fact that it’s happening now is a sign times are changing.

“My Indigeneity is so rooted in my work and I’ve always wanted to do really important work and tell these stories,” said Dove.

The show is the brainchild of creator Tom McCarthy, who wrote the Academy Award-winning screenplay for the film Spotlight about Boston Globe journalists uncovering molestation cover-ups by the Catholic church.

Alaska Daily is based on a series of articles about sexual violence in Alaska written for the Anchorage Daily News by reporter Kyle Hopkins that caught McCarthy’s attention.

Dove chuckles when she talks about working with two Hollywood heavyweights: “Both Oscar winners and then here is me!”

But Dove is no lightweight.

She previously appeared in The Revenant starring Leonard DiCaprio and starred in the film adaptation of B.C. author Eden Robinson’s Monkey Beach.

At 31 years old, Dove also has two director credits to her name and, this spring, she can be seen in the psychological drama Bones of Crows — a miniseries about Canada’s residential school system airing on CBC.

Alaska Daily is an ABC production and airs Thursdays at 10 p.m. PT on both ABC and CTV.