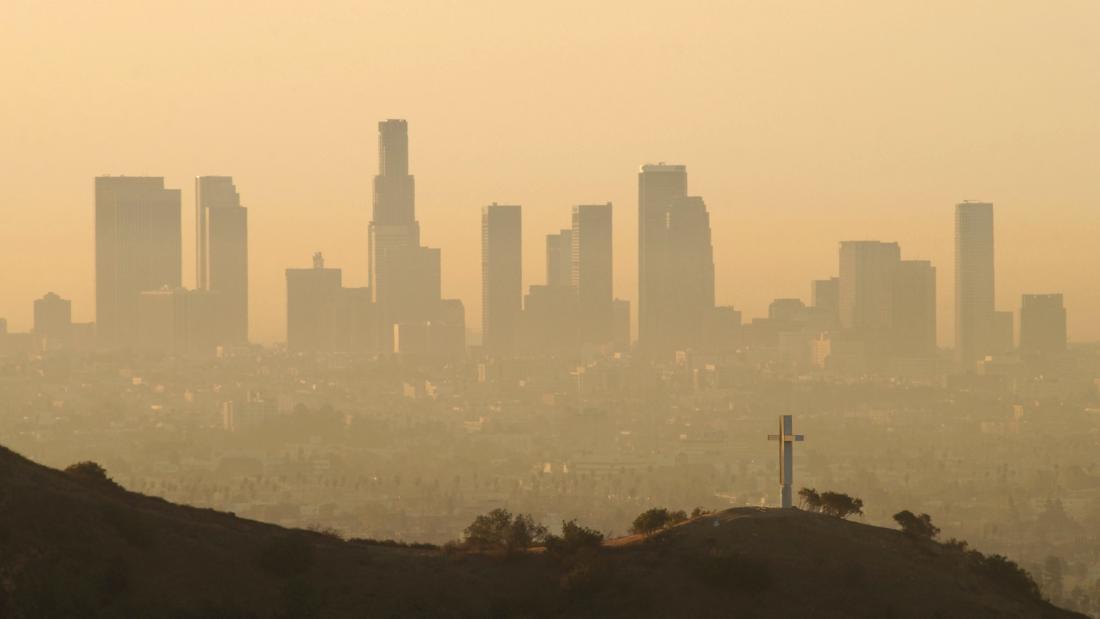 The findings, presented Saturday at the European Society for Medical Oncology Presidential Symposium in Paris, suggest that air pollution can trigger lung cancer in people with no history of smoking because some air pollutant particles may promote changes in cells in the airways.
In particular, more exposure to airborne particulate matter or particle pollution — at 2.5 micrometers in diameter or smaller — can drive rapid changes in airway cells that have mutations in a gene called EGFR, which are seen in about half of people with lung cancer who have never smoked, and another gene linked to lung cancer called KRAS, according to the research, conducted by scientists at the Francis Crick Institute in London and other institutions around the world.
“We found that driver mutations in EGFR and KRAS genes, commonly found in lung cancers, are actually present in normal lung tissue and are a likely consequence of ageing,” Charles Swanton, a scientist at the Francis Crick Institute and chief clinician at Cancer Research UK, who presented the findings, said Saturday in a news release.

Particulate matter or particle pollution in the air is a mix of solid particles and liquid droplets, according to the US Environmental Protection Agency. Some are emitted in the form of dirt, dust, soot or smoke, and they can come from coal- and natural gas-fired plants, cars, agriculture, unpaved roads and construction sites, among other sources.

Zeroing in on a possible mechanism

The researchers analyzed data on 463,679 people to find associations between their exposure to air pollution and cancer risk.

Fine particulate matter, at 2.5 micrometers in diameter (PM 2.5) or smaller, is the tiniest air pollutant yet among the most dangerous. When inhaled, these pollutants can travel deep into lung tissue, where they may enter the bloodstream and contribute to asthma, cardiovascular disease and other respiratory illnesses.

As part of their analysis, the researchers found that increasing levels of air pollutants at PM 2.5 were associated with overall increases in the risk of EGFR-related non-small cell lung cancer in England, South Korea and Taiwan. Up to 33% of normal lung tissue samples in the study harbored driver mutations in EGFR and KRAS, even in the absence of cancer.

“The first thing is, we look at the epidemiological data around air pollution levels and lung cancer risk in never-smokers, finding a good correlation in England, South Korea and Taiwan,” Swanton said in a video released by the European Society for Medical Oncology on Saturday.

“Secondly, we use animal models to show that exposing mice to pollution — these mice are prone to mutations in EGFR or KRAS — we see a dramatic increase in the number and size and grade of cancers in these mice after exposure to pollution,” he said.

The researchers examined 247 normal lung tissue samples, taking a close look at tissue from humans and mice after exposures to air pollutants, and then investigated the consequences of that exposure in the mice models.

“What we found is that air pollution exposure in both mice and humans results in an inflammatory axis,” which transforms cells, Swanton said in the video.

These mutations in the EGFR and KRAS genes “may very well be the reason that the nonsmoker population ends up getting lung cancer. That’s been a question we’ve had for a number of years: Why is it that individuals, otherwise healthy, with no relationship to secondhand smoke or primary smoking are still developing lung cancer?” Dr. Albert Rizzo, chief medical officer for the American Lung Association, told CNN on Monday.

“So we know that air pollution was listed as a carcinogen a number of years ago by the World Health Organization, and I think this study just adds evidence to that being a particular mechanism for those PM 2.5 particles leading to the development of lung cancer in this population,” said Rizzo, who was not involved in the research.

“We should really make sure we limit the PM exposure as much as possible,” he added. “We don’t have much control over our genetics right now, but we can control the air pollution.”

Research has found that exposure to PM 2.5 air pollution can be associated with lower lung function and an increased risk of cardiac arrest, among other health problems. One study, published in the Proceedings of the National Academy of Sciences in 2019, estimated that air particulate matter was responsible for 107,000 premature deaths in the United States in 2011, costing society $886 billion.

“The same particles in the air that derive from the combustion of fossil fuels, exacerbating climate change, are directly impacting human health via an important and previously overlooked cancer-causing mechanism in lung cells,” Swanton said in the news release.

“The risk of lung cancer from air pollution is lower than from smoking, but we have no control over what we all breathe,” he said. “Globally, more people are exposed to unsafe levels of air pollution than to toxic chemicals in cigarette smoke, and these new data link the importance of addressing climate health to improving human health.”

The new research suggests that, rather than causing mutations in cells that lead to cancer, airborne PM 2.5 pollutants can switch on existing mutations, Richard Smith, chair of the UK Health Alliance on Climate Change, wrote in an opinion article in the medical journal BMJ on Monday.

“This mechanism may be important in other cancers with carcinogens other than air pollution,” Smith wrote.

“The usual invisibility of current air pollution must contribute to us failing to give it the attention it deserves, but the roots of medicine’s neglect of air pollution must lie with the intertwined factors of the feeling that there is nothing doctors can do about air pollution and failures of education of doctors,” he wrote.

“There is advice that doctors can offer to individuals — recognising the importance of polluted air, reducing internal pollution in the home, accessing information on local air pollution, changing travel routes, avoiding particularly poisonous days, and perhaps even contributing to lessening the problem by driving less or not all — but the needed response is political action at a local, national, and global level.”

Highway of Tears monument to MMIWG a symbol of honour and hope, advocates say