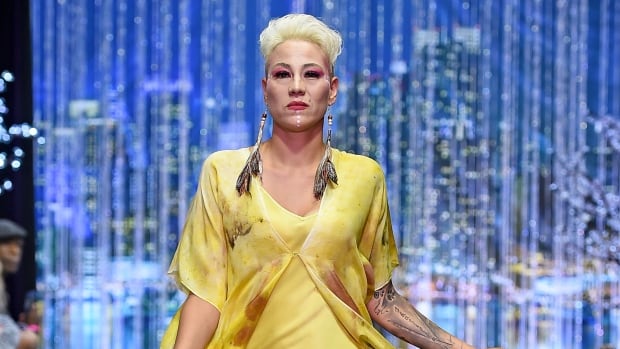 
A model from Muscowpetung Saulteaux Nation in Saskatchewan was able to not only walk the runway in New York Fashion Week, but also perform traditional jigging.

Courtney-Dawn Anaquod, a model and dancer who lives and works in Saskatoon, said she wanted to cry from happiness but she was able to hold back the tears.

“Because it was a dream come true, it absolutely was,” she said.

She said the experience was also empowering.

“Every step I walked onto the runway was a step of healing for our ancestors who [came] before us, who fought for us.”

WATCH | Courtney-Dawn Anaquod performs traditional jigging on the the runway:

A model from Muscowpetung Saulteaux Nation in Saskatchewan walked the runway at New York Fashion Week — and performed traditional jigging.

She said not only was it her first time in New York, it was her first time travelling outside of Canada. Her father, Donny Anaquod, helped her drive there along with her cousin Rosanna Anaquod.

“They [are] such big supporters in everything I do,” Courtney-Dawn said.

Donny Anaquod said seeing his daughter on the runway was “fantastic.”

“I had tears in my eyes; the dancing was absolutely fabulous,” he said.

“It was an accomplishment of her biggest dream and that’s what I wanted to see.”

He said Courtney-Dawn had always had her eyes set on modelling and experiencing the fashion scene.

“She certainly achieved that goal,” he said.

Courtney-Dawn said for her, breaking through the cycle of intergenerational trauma was important.

“I’m going on six years sobriety, I fought a battle of alcoholism,” she said.

“[I fought] my way through and [survived] three domestic violence relationships.[I grew] up in a family circle with cycles of family violence and addictions, so [I was] able to overcome those challenges and those troubling times within my family and within myself.”

Courtney-Dawn said she took all of the challenges she has faced and turned them into opportunities for her to rise and overcome them.

‘I will jig on that runway’

Jigging is another passion of hers and she was happy to get a chance to showcase that as well.

She said the organizer of International Indigenous Fashion Week had asked if she wanted to showcase her jigging talent as well.

“I had told her ‘absolutely, I will jig on that runway,'” she said.

“I truly dance anywhere I possibly can.”

Along with jigging in the fashion show, Courtney-Dawn said she also jigged in all of the eight states she passed through on her way to New York.

“Dancing is at the centre of who I am,” she said.

Donny said Courtney-Dawn has been dancing since she was 10. He is a guitar player and had gigs throughout Courtney-Dawn’s childhood, and she travelled with him on the road.

“She was always with me and she socialized right in there with the rest of the dancers and picked up on it very fast,” he said.

Courtney-Dawn said another reason why she felt this trip was important was to help inspire other Indigenous people and youth to follow their dreams. She has two children, aged 13 and 16, and a 19-year old nephew who she raised.

She said she wanted to show her children that anything is possible.

“Somebody may go through some struggles and challenges through life, you can still make your dreams come true,” she said.