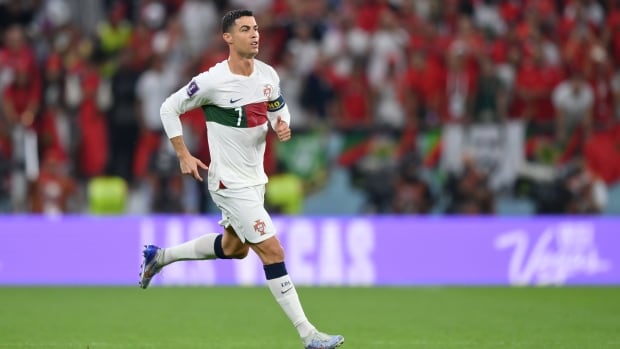 
Cristiano Ronaldo completed a lucrative move to Saudi Arabian club Al Nassr on Friday in a deal that is a landmark moment for Middle Eastern soccer but will see one of Europe’s biggest stars disappear from the sport’s elite stage.

Al Nassr posted a picture on social media of the five-time Ballon d’Or holding up the team’s jersey after Ronaldo signed a deal until June 2025, with the club hailing the move as “history in the making.”

“This is a signing that will not only inspire our club to achieve even greater success but inspire our league, our nation and future generations, boys and girls to be the best version of themselves,” the club wrote.

It also gives the 37-year-old Ronaldo a massive payday in what could be the final contract of his career. Media reports have claimed the Portugal star could be earning up to $200 million US a year from the deal, which would make him the highest-paid soccer player in history.

Ronaldo said in a statement that he was “eager to experience a new football league in a different country.”

“I am fortunate that I have won everything I set out to win in European football and feel now that this is the right moment to share my experience in Asia,” the forward added.

While the signing is a massive boost for Middle Eastern soccer, it will also fuel the debate about Saudi Arabia using so-called “sportswashing” to boost the country’s image internationally. Saudi Arabia’s sovereign wealth fund owns Premier League team Newcastle, and the country is considering a bid to host the 2030 World Cup.

Ronaldo had been a free agent after his contract was terminated by Manchester United following an explosive TV interview in which he criticized manager Erik ten Hag and the club’s owners after having been repeatedly benched and even temporarily suspended by the club.

He is also coming off a disappointing World Cup where he was benched in the knockout rounds and left the field in tears after Portugal lost in the quarter-finals to Morocco.

And after a storied career that saw him win the Champions League with both United and Real Madrid, along with league and cup titles in England, Spain and Italy, he will now seemingly see out the last years of his career far away from the spotlight of top European soccer.

While Saudi Arabia earned its biggest international soccer win ever at the World Cup in Qatar last month when it beat eventual champion Argentina in its first group-stage game, the domestic league has few other stars and is not watched by a major international audience.

How does Canada’s bail system actually work? And where does it fall short?