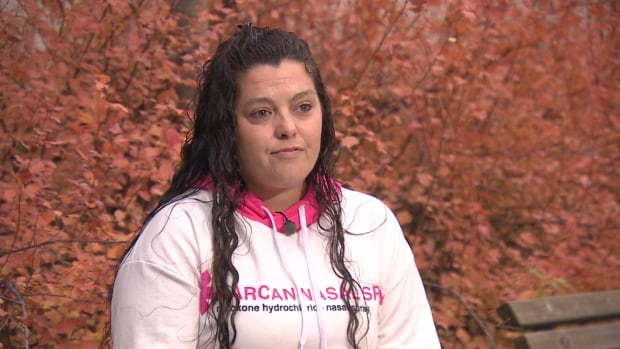 Sask. woman recovering from addiction fears for her sister as drug crisis sweeps through province


Every day Meagan Jasper wakes up wondering if her younger sister is still alive.

She says her sibling Brooke was a good kid who only ever wanted to become a mother.

Jasper, who is recovering from addiction, lives in Moose Jaw, Sask., around 70 kilometres west of Regina.

She said Brooke, her only sister, supported her when she was hooked on drugs.

But the trauma from an abusive relationship resulted in Brooke struggling with addiction herself, bringing her to a point where she is now overdosing several times a week, Jasper said.

Now Jasper is terrified about Brooke being out somewhere on Regina’s streets overdosing, and potentially not having enough Narcan to save her.

“It’s scary not knowing if I’m going to wake up to that phone call or to a rest in peace post about her,” said Jasper.

“I wake up every day, and my social media is full of rest in peace [posts]. And it’s young people, it’s a whole generation, like generations, that are being wiped out right now.”

Sask. on track for another increase in drug toxicity deaths

As of Sept. 30 this year, there have been 336 deaths linked to overdoses in the province — 116 confirmed drug toxicity deaths and 220 suspected fatal overdoses — according to the most recent report from the Saskatchewan Coroners Service.

Last year the province reported 409 confirmed or suspected drug toxicity deaths for all of 2021.

Now Saskatchewan’s Chief Coroner Clive Weighill said he anticipates the province will see yet another year-over-year increase in the deaths.

“I would expect that we’re going to see a number probably into the mid to high four hundreds,” said Weighill.

“I think it’s a problem right across Canada.”

Fentanyl plays a big role in the rising numbers, with the opioid being 50 to 100 times more toxic than others such as heroin or morphine, according to the province.

From Jan. 1 to Sept. 30, 2022, the Saskatchewan Coroners Service reported 64 confirmed accidental drug toxicity deaths related to fentanyl, along with 34 connected to acetyl-fentanyl.

Across Canada 85 per cent of all accidental apparent opioid toxicity deaths from January to March 2022 involved fentanyl, according to the government of Canada’s website.

But it is usually not just one drug killing people, but a combination of substances, said Weighill.

With the drug supply getting more toxic, governments need to start responding better to save the lives of their residents, said Donald MacPherson, executive director of the Canadian Drug Policy Coalition.

“What’s happening in Saskatchewan, it sounds like the illegal drug market is catching up to other parts of the country,” he said.

“The transnational organized criminal drug market is robust, and they’re using fentanyl like they’ve never used it before.”

The executive director for Prairie Harm Reduction in Saskatoon is not surprised by the most recent drug toxicity deaths numbers.

“We’re under a lot of pressure,” she said.

“We don’t have any more resources that we can offer. Without funding for our safe consumption site, we are extremely limited in what we’re able to do.”

Earlier this year, the province said it had put $470 million toward mental health and addictions services for 2022 and 2023.

But in March, Prairie Harm Reduction was once again left out of the province’s 2022-23 budget. It has been denied provincial funding three years in a row.

So far there have been no fatal overdoses inside the facility, DeMong said. But the picture on the other side of the doors is different.

“What we’re currently seeing, because we’re not able to be open all of the time, is that our staff … are attending to overdoses outside of the building when we’re not open,” said DeMong.

“Without the funding, it’s becoming more and more difficult to run at a full capacity and really address what the community is needing.”

Province buys spectrometers, but no training yet, say organizations

This year the province gave Prairie Harm Reduction a drug checking spectrometer, used to identify what’s in drugs before they’re consumed. However, the device was not only delivered later than expected, it has been sitting in a box since the summer, DeMong said.

“We are still needing to go through the training,” DeMong said. “At this point the communication from the province is that the training hopefully will be set up in December.”

The machine arrived in Saskatoon in August, but was expected in late spring, said DeMong said.

Staff at the Nēwo-Yōtina Friendship Centre in Regina are also waiting to use their spectrometer.

The organization is running an overdose prevention site, which opened its doors last summer.

“We basically just been sitting here, looking at it, and telling clients that soon we’re going to have one and soon you can come in and get your drugs tested,” said Emile Gariepy, the Nēwo-Yōtina Friendship Centre’s harm reduction manager.

“Training just seems to be getting pushed back month by month.”

The province bought a total of “four fourier-transform infrared spectrometers for use at designated staff-administered drug checking sites” in Regina, Prince Albert, North Battleford and Saskatoon.

Reasons for the delay both in production and shipping include the ongoing supply chain issues related to the COVID-19 pandemic, Saskatchewan’s Ministry of Health said in an email to CBC.

“This is all required before operations can begin.”

An official start-up date has not yet been set, according to the ministry.

Addiction is a disease, says Jasper

Jasper still considers herself a “junkie” and an “addict,” despite being clean for five years.

“It is a disease,” she said. “It’s something that I’m going to have for the rest of my life.”

Inflation, along with a lack of accessible housing and easily available long-term detox and treatment opportunities, create additional challenges for people, she said.

For years, Jasper has been helping others overcome their addictions.

She hopes more support becomes available soon in Saskatchewan, before it’s too late to save her sister.

“We need to focus on keeping people alive,” she said.

“If my sister dies tomorrow … her kids will never see her again.”

Organ donations rise throughout main bike rallies as a result of crashes, examine…