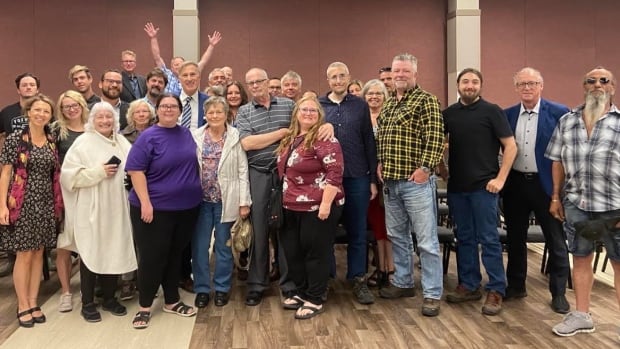 
The trial for 46 people accused of gathering illegally for a rally in Saskatoon during the COVID crisis is now underway.

Proceedings began Monday at TCU Place Convention Centre, rather than the provincial courthouse, because of the number of accused. The trial is scheduled to run two weeks.

The 46 people were each given $2,800 tickets after the May 9, 2021, event at Kinsmen Park. It’s alleged that they violated the Public Health Act order restricting how many could gather and how they needed to be spaced.

One of the accused — People’s Party of Canada Leader Maxime Bernier — is not disputing the allegation.

“Yeah, I was there and I was proud to be there,” he told reporters on a break Monday. “I’m proud of these people.”

Bernier said the 150 to 200 people who met at the park that day were engaging in a peaceful political protest. The lawyers for the accused are arguing that their constitutional right to free assembly trumps the public health order.

Provincial court judge Doug Agnew is presiding. The evidence and testimony over the coming days will be heard in a voir dire, or trial within a trial, with Agnew ultimately deciding what, if any, of the material will be applied as evidence in the trial.

The Crown intends to call 11 witnesses.

City police Sgt. Dave Larocque testified Monday about how he went to the rally in plain clothes and an unmarked police cruiser. He took numerous photos of participants, laying the groundwork for the charges.