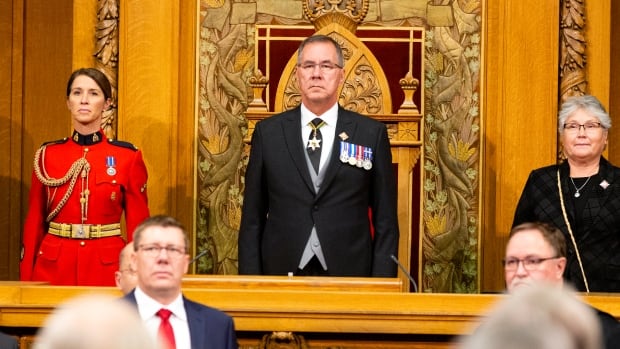 
The Saskatchewan government’s latest speech from the throne promises to amend and introduce legislation this fall to defend the province’s jurisdiction over its natural resources.

Lt.-Gov. Russ Mirasty opened the fall sitting of the Saskatchewan Legislative Assembly on Wednesday with the speech.

The speech laid out the government’s agenda and priorities for the session. The list was topped by legislative changes focused on federal government policies:

“These measures are about removing barriers to unlock Saskatchewan’s incredible economic potential,” Premier Scott Moe said Wednesday. “We just need to remove the barriers that are preventing us from sustainably developing our resources to their full potential and exporting them to markets around the world where they are needed.”

The speech said amending The Saskatchewan Act will be “similar to how Quebec recently unilaterally amended the Constitution to declare that Quebec is a nation and its official language is French.” Moe has spent the past few weeks strongly signaling that the government planned to head in this direction.

The throne speech said the government’s legislation will be “within the Canadian Constitution.” Moe did not get into what specifically will be in the legislation when asked Wednesday.

The speech said, “to be clear this is not about abrogating or ignoring the Constitution. In fact, quite the contrary. It is the federal government that has been intruding on Saskatchewan’s jurisdiction under the Constitution.”

“Roadblocks imposed by our own federal government are also greater than they have ever been,” it said.

The speech said the federal government has done “an end run around Saskatchewan’s constitutional jurisdiction over natural resources under the guise of environmental regulation.”

Moe said the constitutional changes will be meant to “provide certainty for the investment community and to ensure this province is doing all that we can to reassert our constitutional right.”

The throne speech said, “investment is flowing into the province, as several major projects move ahead, creating thousands of new jobs.”

Moe was asked how the province can be boasting about investment coming in, while also saying federal policies are preventing investment.

“We still are seeing record investment in our province. We want to see more and are working hard to attract additional investment, but at the same time, we had a challenge with a canola crush plant that didn’t move forward down in the southeast,” Moe said “There are challenges around some of the environmental costs of setting up here relative to other areas of the world.”

The provincial government announced the Saskatchewan Immigration Accord in July. It said in the speech that it plans to send a signed accord to the federal government “for its ratification.”

The province said it will expand its international trade offices to nine from eight by opening a new one in Germany.

The title of the throne speech is Growth that Works for Everyone. The speech ends by touting Saskatchewan as a reliable supplier to a world “plunged into uncertainty.”

“My government is charting a course that ensures our economy continues to grow and that everyone in Saskatchewan benefits from that growth. More people, more jobs, and more investment in important government services.”

The Saskatchewan government also said it plans to reform the Saskatchewan Liquor and Gaming Authority (SLGA) and mentioned two notable changes, one of which is closing SLGA liquor stores.

“We are exiting the retail sector of SLGA. It is not a core business of government in our view,” Moe said.

He said SLGA will continue to operate the wholesale side of the liquor business.

The government is also bringing back an idea pitched late last spring that would allow municipalities to designate areas “for safe consumption of alcohol in parks.”

The government introduced amended legislation in May, but it needed unanimous approval in the assembly, which was not granted by the Opposition.

The throne speech also said it will create a made-in-Saskatchewan program to “generate voluntary carbon offset credits to producers and companies whose commodities have lower greenhouse gas emissions than global averages.”

The program would allow companies and producers to use credits to reduce their emissions or for the credits to be traded to others.

“My government believes there are better ways to address climate change than the punitive taxes and ineffective regulations imposed by the federal government,” the speech said.

The province also said it will re-open the courthouse in Lloydminster and the Court of King’s Bench in Weyburn.

It said it will continue working on “community-based policing models that meet the needs of First Nations communities,” in particular, discussions with the federal government and Prince Albert Grand Council on developing a First Nations police service.

The province also plans to create a Saskatchewan Marshals Service to work alongside the RCMP.

It also plans to add eight officers to its warrant enforcement and suppression team, and add a new crime reduction team in North Battleford.

“The recent tragedies in our province have also exposed weaknesses in the warrant enforcement process that must be addressed immediately. My government will work with the Correctional Service of Canada to improve information sharing and enhance enforcement activities,” the speech said.

“Health facilities and hospital beds are closed across our province. It is near impossible to find a family doctor,” Beck said in a statement.

The Opposition said the speech’s proposed new measures “are based on Scott Moe’s white paper —  a document that has been widely dismissed and mocked by economists and experts.”

“When you produce a document that is so clearly flawed, it hinders your ability to attract investment and be a credible advocate for the people of our province. The white paper wasn’t created to get results for Saskatchewan — it was designed to distract from Scott Moe and his government’s failures,” Beck said.