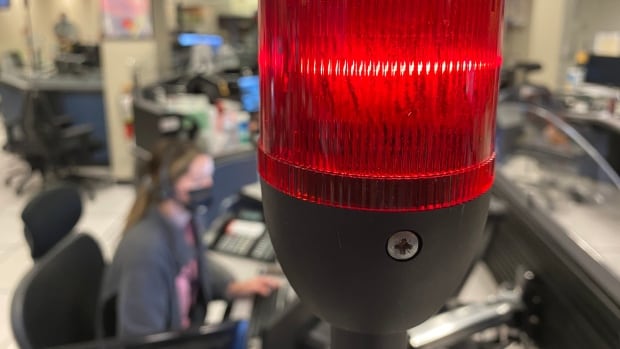 
Psychiatric nurses embedded inside the RCMP’s operational command centre in Regina are taking 911 calls from people in mental distress and coaching front-line officers as part of a pilot project in Saskatchewan that the police force says is the first of its kind in Canada.

The nurses are able to access an individual’s electronic health records and history — off-limits to police — when they speak to a person in a mental health crisis or as they assist RCMP officers in real-time during a mental health emergency.

“We’re working with mental health professionals to deliver a much better service than we have in the past,” said RCMP Sgt. Burton Jones. “We’re trained to help, you know, how to de-escalate situations that involve mental health, but we’re not professionals — we know that.”

In 2020, Saskatchewan RCMP received a total of 4,640 mental health calls — when the caller says their emergency is related to their mental health — at its command centre. In the first six months of this year, it received 2,474 such calls.

In many of those cases, police officers apprehended the distressed person under the province’s Mental Health Services Act and then supervised them in a hospital emergency room for hours, Jones said.

The 12-month pilot — which began May 31 — is already showing promising results. Of the first 50 phone calls received, 17 were handled with a different response than usual police practice, Jones said.

Two nurses — employed by the Saskatchewan Health Authority and contracted by the RCMP — are already on the job inside the command centre. They will be joined by another two health-care workers to allow the service to operate 24 hours a day, seven days a week.

WATCH | The National looks at the RCMP pilot project:

The Saskatchewan RCMP have launched a pilot project to better help people in a mental health crisis by putting psychiatric nurses in call centres to access medical information and support front-line officers. 4:40

Nurses will only verbally share health records information with police, according to the RCMP, with procedures in place that keep police, medical and personal information private.

“The ultimate goal is to share the least amount of information possible, but share enough to better support the health of people in crisis and get them the assistance they require,” said a RCMP spokesperson by email.

‘Step in the right direction’

Across Canada, a number of police services have introduced specialized units that pair police officers with mental health professionals on the ground. But that level of service isn’t currently possible in rural and remote areas, the RCMP said, and they believe this approach by telephone will help those who live outside cities.

The pilot program is modelled after a system in the United Kingdom, where mental health professionals with access to medical records are placed inside regional hubs to both advise officers on the street and answer calls from the public.

“I was delighted to see this being trialled in Canada,” said former British health minister Norman Lamb, who spoke to CBC News from his home in Norwich, England. “You can’t completely remove police from the equation.…But the critical thing is [police] need help.”

The pilot program is also being applauded by the Canadian Mental Health Association (CMHA), which has long called for less reliance on police when it comes to mental health emergencies.

“It is a step in the right direction,” said Jonny Morris, CEO of the CMHA’s B.C. division. “We really do need to position our services to respond with a health response; we are talking about health after all — mental health — and we don’t send police to heart attacks.”

In the northern community of Stanley Mission, 450 kilometres north of Saskatoon, Jonas Hardlotte is encouraged by the RCMP’s desire to improve its mental health response.

Last August, Hardlotte was in mental distress after coming off a binge of drugs and alcohol. Hardlotte struggles with depression and anxiety, and at the time, he’d lost his job, been in a car accident and had disagreements with loved ones.

He called 811, Saskatchewan’s 24-hour mental health support telephone line, but said he got “the runaround.”

When he started cutting himself, his mother-in-law phoned 911.

But the RCMP officer who responded arrived at his door and started yelling at him through the window, threatening to bust in with a sledgehammer. It was captured by Hardlotte on cellphone video.

Jonas Hardlotte lives in Stanley Mission, about 450 kilometres north of Saskatoon, and posted the one-minute video to Facebook. 1:12

Hardlotte said the officer, who has since been reassigned, responded with “straight aggression,” reminding him why he doesn’t trust police when he’s in mental distress.

“There’s been people that’ve been shot just for being mentally distraught, and officers not knowing that, ‘K, this guy’s f–ked up on drugs and alcohol, but maybe that’s just a cry for help,'” he said.

Carey Rigby-Wilcox said while she isn’t “anti-police,” she has spent the past two-and-a-half years regretting her 911 call.

In December 2018, her 27-year-old son, Steven Rigby, was threatening to kill himself with a gun.

Rigby-Wilcox, who lives in a rural area outside Saskatoon, called 911. The RCMP initially responded, followed by the Saskatoon Police when Steven drove toward the outskirts of the city, where he was ultimately shot.

According to testimony at a coroner’s inquest, officers fatally shot Steven after they perceived he pointed a gun in their direction.

While health records would’ve shown that Steven had suicidal intent, and had spoken of provoking police to shoot him,the officers on scene the night Steven died didn’t have that information, said Rigby-Wilcox.

Last month, the coroner’s inquest made several recommendations to improve both the health system and police services in Saskatchewan as a result.

Rigby-Wilcox is convinced that a person’s health history should be made readily available to dispatchers and front-line officers; she said she approves of this pilot project, since it will provide more access to such health information.

“If they were given that opportunity to understand that this is a potential suicide by cop, they might actually handle it different,” she said.

Rigby-Wilcox said she understands that police are put in difficult positions and wants them to have more support. She also said she doesn’t expect this program to be a pilot for long.

“I see it as something that will continue to grow and continue to be a part of the system. It just has to be.”

While Rigby-Wilcox will never know if this pilot could have helped save her son’s life, she said she hopes it will save others.

If you’re experiencing suicidal thoughts or having a mental health crisis, help is available. For an emergency or crisis situation, call 911.

You can also text CONNECT to 686868 and get immediate support from a crisis responder through the Crisis Text Line, powered by Kids Help Phone.

Kids Help Phone can also be reached at 1-800-668-6868, or you can access live chat counselling at www.kidshelpphone.ca.