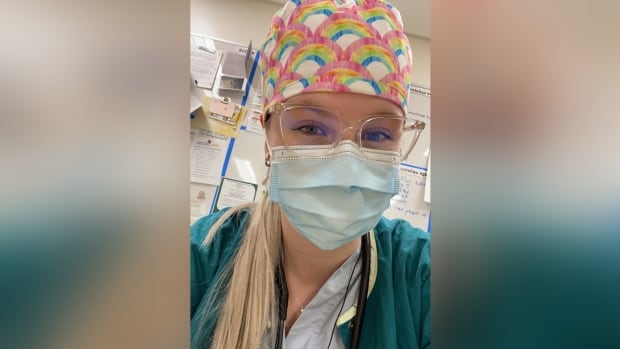 Sask. nurse says she’s burnt out only 8 months into the job


Jacelyn Wingerter got into the nursing profession to help people, not knowing she’d feel “defeated” after less than a year on the job.

Wingerter, 22, became a registered nurse in January and began working in the emergency room at Saskatoon’s Royal University Hospital.

The past eight months have been mired in burnout, exhaustion, overcapacity and a nursing shortage — problems that are also plaguing nurses and other health-care workers in other parts of Canada.

“You don’t get a break. You have to run for 12 hours straight doing one thing after another,” said Wingerter, who first spoke about her experience in a Maclean’s article.

Wingerter says 40 to 50 patients are typically waiting for care each day in a waiting room that has space for about 20 people. There aren’t enough nurses or beds for such a high patient load, Wingerter says.

In one instance, Wingerter says there were a total of 120 patients in the ER department. A patient who was “coding” — requiring immediate lifesaving measures — was stuck on an ambulance stretcher in the ambulance bay due to a lack of beds, according to Wingerter.

She also describes paramedics lining the halls waiting to offload patients, a STARS Air Ambulance stuck waiting an hour for a bed for their patient and nurses having to treat people in hallways.

Tracy Zambory, president of the Saskatchewan Union of Nurses (SUN), says she fears the worst case scenario could ultimately happen.

“Someone could pass away because they haven’t had timely access to care due to the nursing crisis,” Zambory said.

Wingerter says she worked 290 hours in May. That’s 146 hours of overtime on top of the 144 hours she would regularly work.

While she acknowledges it was her choice to work that much overtime, she says she felt “guilty” not helping her colleagues who are facing a dire situation.

“At the end of that month, I was like, ‘I can’t keep doing this anymore.’ I’m young, but I can’t work that much. I will actually end up killing myself if I do that,” Wingerter said.

SUN, which oversees 10,000 registered nurses, nurse practitioners and registered psychiatric nurses in the province, released data from this spring showing 83 per cent of members reported vacant positions in their units, more than double compared to last year.

Wingerter says the strain on nurses is impeding their ability to build a rapport with patients.

Wingerter says she never imagined that she would be so burnt out at her age.

It’s affected all aspects of her life, leading to things like poor sleep and wanting only to stay at home on her days off because she has no energy.

Many of her colleagues feel the same, Wingerter says.

“The biggest thing that everybody is saying is that they just don’t recognize themself anymore, like they don’t know who they are anymore outside of work,” she said.

“Because you just give your all at work and you have nothing left after.”

She’s still working full-time in the ER, but is taking fewer overtime shifts.

Zambory says nurses are burning out across Saskatchewan.

“This feeling of being burnt-out, of feeling overwhelmed, of not being able to cope with what is going on in the workplace is rampant throughout the entirety of health care,” she said.

“It affects the entirety of the registered nursing profession in this province.”

Zambory says she recently spoke with Premier Scott Moe, and she wants him and the Saskatchewan Health Authority “to admit there’s a nursing crisis” and give nurses a seat at the table to discuss solutions.

In a prepared statement, the Ministry of Health said “there are human health resource challenges across the country that Saskatchewan is also currently facing.”

Work to recruit and retain staff is ongoing, the statement says.