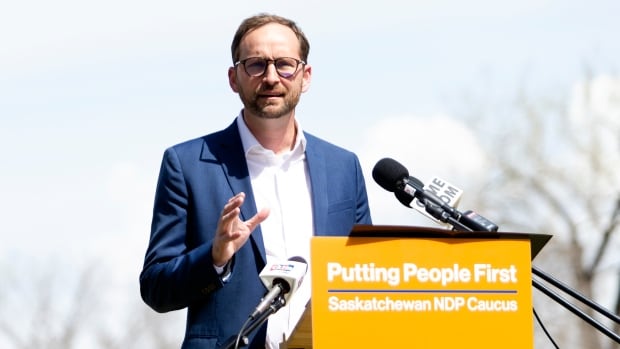 Sask. NDP Leader Ryan Meili to step down, will remain as interim leader until party chooses a successor


Ryan Meili will announce he is resigning as Saskatchewan NDP leader on Friday morning, CBC News has learned.

Meili will remain as interim leader until the party chooses his replacement.

“I’ve been thinking about this for a while,” Meili told CBC News in advance of his public announcement.

“I think it’s time for a different voice.”

Meili said he intends to remain in caucus as the MLA for Saskatoon Meewasin.

On Tuesday, the Saskatchewan Party’s Jim Lemaigre won the Athabasca byelection, taking the seat the NDP had held since 1998.

NDP candidate Georgina Jolibiois was seen as the favourite, as a former MP and longtime mayor of La Loche.

Only 24 per cent of registered voters cast ballots in the byelection.

Meili said the result was not the reason for his decision but said it was “clarifying.” He said losing the seat was “really disappointing.”

He had been quiet on social media following the result, which fueled speculation about his future.

“I’ve been proud of the work I’ve been able to be a part of as leader and as part of this caucus the things that we’ve fought for access to health care, fixing problems in our classrooms, keeping jobs in Saskatchewan, investing in renewable power. These are things I really care about.”

Meili said the pandemic played a role in the decision.

“It would be hard to describe this last period without discussing the pandemic and how central that has been to my role as leader of the opposition and the work we’ve had to do.”

Meili said he believes the end of the pandemic is approaching and said as someone who has advocated for masks and mandates at a time when people are ready to move beyond, “it is time for a new voice.”

Meili said support for his party has grown and said the right-wing of the province is “fracturing” and he feels there is “a real opportunity for an NDP government.”

“To take full advantage of that opportunity, we do need a new voice.”

Meili said he has asked the party president to trigger a leadership race.

He said his recommendation is for the party to choose a new leader within a few months.

Meili said the pandemic has been hard on his family like others in the province. He mentioned his wife Mahli Brindamour who is a pediatrician and has been under “an extreme amount of pressure.”

He said he is looking forward to spending more time with his sons Abe and Gus.

“We need a leader who comes in with the full support of caucus and the party so that we can work to have that electoral success in 2024.”

“Scott Moe has proven he is willing to put politics ahead of people’s lives and we need a government that actually cares about Saskatchewan people.”

The 2020 provincial election saw the NDP fail to build on the 13 seats it had before the election.

Meili won his seat in Saskatoon Meewasin with 51 per cent of the vote.

In October 2021, Meili received 72 per cent support from NDP delegates at the party’s annual convention. A total of 124 delegates or 28 per cent voted to hold a leadership review.

The party will now select its fourth leader since Lorne Calvert’s retirement in 2008.

“I feel good about making a decision that is best for the party and the province.”

Meili compared himself a Peloton, the trendy home exercise bike which saw its popularity skyrocket early in the pandemic, only to have its share price plummet in recent months.

“I was walking through the snow the other day and I thought ‘I’m a bit of a Peloton right now.’ I was what we needed. It was really important to have a physician as a leader during this pandemic and for us as a party to be willing to say the tough things about public health.”

“As we move past this phase people are going to be needing a new voice.”

‘How am I related to The Rock?’ Nova Scotia boy’s question sparks museum exhibit

Telegraph-Journal, other Irving-owned N.B. newspapers to be sold to Postmedia