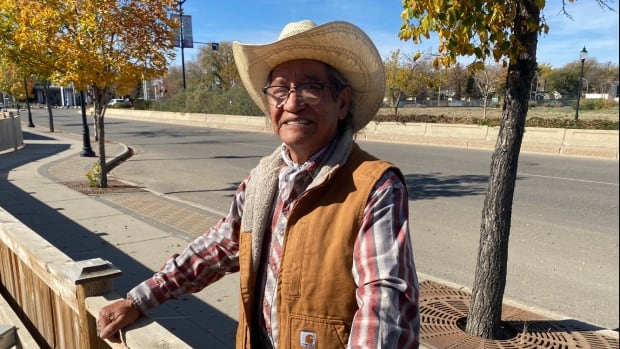 This cache of documents, along with other internal papers obtained by CBC News in recent weeks, illustrates how Catholic officials, aided by a team of veteran lawyers, successfully fought years of federal government efforts to make them pay the full amounts promised in the landmark 2005 Indian Residential Schools Settlement Agreement.

Advocates say they also add vital detail and context to the story of the Catholic Church’s broken promises.

“I think the result is a really important outcome for openness and transparency for our court system. It goes to that old maxim that justice not only must be done — it must be seen to be done,” said Sean Sinclair, a Saskatoon lawyer who argued the case on behalf of the two media organizations.

“It allows the public to find out what happened in this case, and it allows survivors to get answers.”

CBC News requested the documents July 5 from the Court of Queen’s Bench in Regina. The files date back to the 2015 decision by Justice Neil Gabrielson to approve the Catholic Church’s buyout proposal.

That ruling absolved the Catholic church of its promise to pay $29 million in cash to residential school survivors. It allowed the Church to suspend its separate $25-million fundraising drive to raise money for survivors after raising less than $4 million. And it prevented further scrutiny of claims that it provided more than $25 million worth of “in-kind” compensation to survivors.

Court officials and judges had previously acknowledged they had the files, but declined to provide them, saying a formal court application must be submitted.

CBC News and the Globe made a joint submission and enlisted Sinclair to argue for the documents’ release.

Last month, Gabrielson heard the case and agreed to grant access to the documents.

Sinclair said transparency is a vital principle of the justice system, particularly on an issue of “tremendous public interest” such as residential schools.

“This affects survivors. This affects the public at large. And it’s about the resolution of court case. It feels great to be able to assist people and to ensure our court system is transparent,” Sinclair said.

Sturgeon Lake Cree Nation elder A. J. Felix, who spent 13 years in residential schools, said survivors and the public should have been able to see these documents right from the start. He and other survivors had threatened to drive to Regina and personally demand the files from the courthouse if this application had been rejected.

“A lot of the history was hidden, but the truth is starting to come out,” Felix said. “Having this information is going to tell us how to deal with what we have in front of us.”

Regina lawyer James Ehmann, who represented the Catholic entities in court, said he can no longer speak for them, and that no one else was available.

Following weeks of calls to boycott Catholic mass, a petition to suspend the church’s tax exempt status and a call for the Church to “do better” from federal Minister of Crown-Indigenous Relations Carolyn Bennett, bishops from across Canada issued a written public apology to residential school survivors Sept. 24. They also promised a renewed fundraising campaign with a goal of $30 million.

Felix said that’s not good enough. Like the Federation of Sovereign Indigenous Nations and others, he’s demanding a criminal investigation.

Felix said $30 million is insufficient considering the damage done to more than 100,000 survivors and their families, particularly when compared with the estimated tens of billions the Vatican holds in assets.

Felix said there can be no forgiveness or reconciliation until all of the truth is revealed. He said the fight for these latest documents makes it clear there’s still a long way to go.

“I’m not much of a forgiving person when it comes to forgiveness for this process, but I am one to seek redress,” Felix said.

The court files contain new information and elaborate on many of the individual revelations previously reported by CBC News.

1) Corporation formed to administer deal. The 50 Catholic entities that signed the 2005 Indian Residential Schools Settlement Agreement formed a corporation to administer the deal. The “articles of incorporation” are contained in the cache released to CBC News and the Globe. It outlines the various classes of voting members, liability protection for directors, conflict of interest guidelines and rules for investing the corporation’s assets.

It also obligates all officers and employees to sign a non-disclosure agreement. They are ordered to “retain as confidential all information provided such person by the Corporation or such information as may come into the possession of such person in the course of or incidental to such persons’ duties and responsibilities.”

The corporation was dissolved shortly after the 2015 buyout. Catholic officials contacted by CBC News in recent months have said there’s no one left to speak about the deal because the corporation no longer exists.

2) Catholic church spent millions on legal fees and expenses.The Catholic entities spent more than $6 million on unapproved legal fees, administration, internal loans and other expenses. This included payments to lawyers sitting on the Catholic board overseeing the settlement. None of the other Christian churches involved (Anglican, Presbyterian or United) engaged in these practices and paid the full amounts they owed shortly after signing the 2005 agreement.

“Canada was never informed of this conflict of interest … no other church organization has claimed legal expenses, never mind legal expenses of $2.7 million,” senior federal government analyst Pamela Stellick stated in a 2014 affidavit contained in the package released last month.

“As of today, there have been many problems in getting the Catholic entities to fulfil their obligations.”

The Catholic Church spent millions of dollars earmarked to residential school survivors on lawyers, administration, a private fundraising company and unapproved loans, according to documents obtained by CBC News. 2:12

3) Church tried to claim expenses from survivors’ funds. Catholic entities attending Truth and Reconciliation Commission events and meetings across Canada and paid their expenses from the pot of money dedicated to survivors. In a March, 2012, letter attached to Stellick’s affidavit, another federal official tells corporation board chair and current Archbishop Gerard Pettipas this is a clear violation of the deal. She tells him Church officials “must not draw from funds to the disadvantage of the beneficiaries … I urge the [corporation] to fully pay what was owed to the AHF [Aboriginal Healing Foundation] as soon as possible.”

In a September reply, Pettipas disagrees. He says mediation is required and federal lawyers should contact Pierre Baribeau, one of the lawyers sitting on the board of the corporation approving Baribeau’s legal fees.

In November, Pettipas sends another letter. He says he still disagrees with the federal government dollar figures, but admits they will need to send further payment to the AHF. He notes they will start to audit and review all expenses charged by the corporation’s counsel.

4) Catholic church absolved of paying full settlement amount. In a 2015 court decision, Gabrielson ruled in the Catholic entities’ favour and absolved them from paying the full amounts. Gabrielson said a reasonable person would conclude that the two sides had already agreed to the deal, even though federal government lawyer Alexander Gay stated in emails, “We may have a problem,” and, “We have no agreement on the terms of the settlement.”

The court files did not contain any explanation of the $25 million worth of in-kind services. CBC News and the Globe separately obtained those documents last week through other channels.

Survivors and advocates interviewed say many of the listed services, which the Catholic Church valued at more than $28 million, are nothing more than attempts to evangelize and convert Indigenous people. The list includes Bible study programs, placement of priests and nuns in remote northern communities, services under the frequently used label of “religiosity” and religious-document translation.

She said this information is valuable for survivors, for academics studying this dark history and for the public to know the truth.

Turpel-Lafond said she plans to post these and other documents with explanations on the centre’s website in the near future.

“It will allow First Nations communities and survivor organizations to see what happened. That accountability needs to be at the local and national level,” she said.

Turpel-Lafond said the documents make one point clear: the Catholic Church officials betrayed survivors, and the federal government and courts failed to hold them accountable.

“From the get-go, this was not something survivors sat in the room and agreed to. Survivors were outside of this,” she said.

“We now see this was questionable from the get-go.”