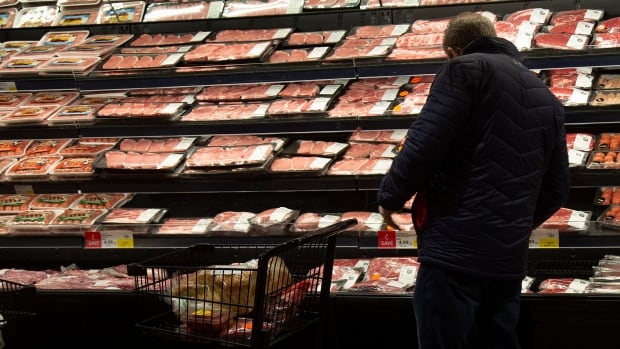 
Cattle producers in Saskatchewan want more transparency about who is profiting from beef sales.

They say meat packers and retailers are limiting supply to drive up prices.

“We know what retail prices are and we know what our farm gate prices are,” said Garner Deobald, who farms near Hodgeville, Sask. “There’s a lot of money that’s staying in the supply chain, but not coming back down to the grassroots.”

The association wants the federal and provincial governments to follow the money and investigate.

“Let’s have a look at see if we can identity where the profits are being made, and if there is a way or a strategy that we can come up with to share in this a little more this equitably.”

From calf to consumer

Kathy Larson said on Monday that the package of sirloin steaks in her fridge cost about $12 per pound, or about $9 per steak.

“A lot of times when you see that in the grocery store, you think oh well the cow-calf producers, the cattle producers, they must be so rich.”

But Larson said that assumption is incorrect.

The beef supply chain begins with the cattle producers and newborn calves, explained Larson, a research associate with the department of agricultural and resource economics​ at the University of Saskatchewan and a former beef economist with the Western Beef Development Centre.

Producers raise the calves born in springtime until they’re weaned from their mothers and weigh about 550 lbs, Larson said. Then the animals are often sold to a backgrounder lot for “usually around two dollars a pound.”

When cattle reach about 1,000 lbs, they are sold off to a feedlot — their last home.

Larson said Alberta and Saskatchewan have about 170 combined feedlots, which fatten the cows up to 1,400 lbs before sending them off to slaughter.

She said feedlots are currently selling the animals to facilities run by giant companies Cargill and JBS for about $1.75 per pound. She noted she saw ground beef at the store on Sunday priced at $6.40 per pound.

The majority of beef is processed at federally inspected plants to meet export requirements. She said Cargill and JBS account for about 65 per cent of all federally-inspected Canadian slaughter capacity.

“They control a lot. We go from 12,000 cow-calf [operations] to less than 200 feedlots and then two main packers controlling almost two-thirds of the federally inspected slaughter,” she said.

She said the request for transparency on where the retail dollar is going makes sense. She noted there are similar issues in the United States.

The Associated Press reported last week that Sysco, a massive food distributor, joined multiple other businesses in accusing the country’s four largest meat processors, including Cargill and JBS, of working together to inflate beef prices.

“Industry members are questioning packers’ strategy, which seems to be limiting the amount of product available at the retail level ― keeping boxed beef prices high while allowing fed cattle supplies to build in the countryside, which keeps cattle prices low,” said the SSGA in its call for an investigation.

Cargill declined to comment, directing CBC to the Canadian Meat Council — which did not respond to request for comment. CBC did not receive a response from JBS.

Deobald said producers are frustrated that consumers are paying more while producers, who are selling the cattle that will eventually become beef, risk going under.

He said this frustration is amplified at a time when producers are already grappling with the harsh impact of drought, “astronomical” feed costs, and rising costs of fuel and fertilizer. People are having to downsize or sell off herds, convert grassland into cultivated crops and sell land.

Deobald said there’s only so much people can take before they throw up their hands, saying “enough is enough.”

“We enjoy what we do, we are willing to work long hard hours, but if there’s no reward at the end and you’re losing money at the end it just can’t continue.”

In a written statement, a spokesperson for the provincial Ministry of Agriculture said “we also share industry pricing concerns; however, it would be best for the SSGA to discuss their investigation request with Competition Bureau Canada.”

Deobald said SSGA will consider seeking action through the Canada Competition Bureau, which investigates alleged price-fixing and other anticompetitive conduct, if their calls for action go unanswered.

A spokesperson for the Canada Competition Bureau said they couldn’t comment on specific behaviour in the marketplace, but encouraged anyone who believes to have evidence of price-fixing to report it.

How to stop lashing out when you’re hurting