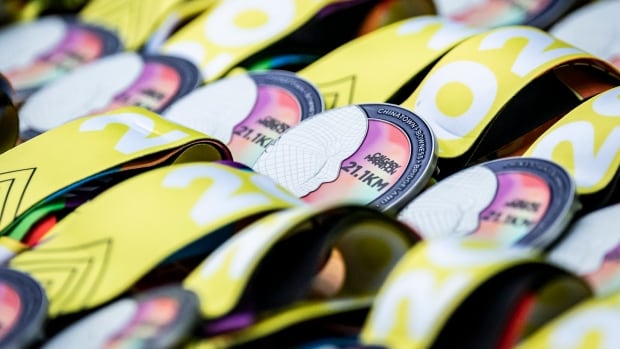 
With 24 marathons under his belt, Dustin Gavin knows what it takes to finish a race.

Gavin also knows that no matter how many times he crosses the finish line, the achievement just doesn’t feel complete until he has that medal around his neck.

“The medal for me is my way of having something tangible that says you finished what you set out to do,” the Ottawa pharmacist said. “The only way I’m getting the medal is if I cross the finish line.”

Gavin said he was disappointed to learn last weekend that a race he’s competing in this Sunday, The County Marathon in Prince Edward County, Ont., won’t be distributing medals to runners this year.

Instead, organizers have announced they’ll be handing out customized decals at the finish line.

Mark Henry, race director of The County Marathon, said organizers had planned to offer medals like in previous years, but when they approached their usual supplier in mid-August, they were warned that lingering supply-chain problems could leave them empty-handed on race day.

“They couldn’t guarantee anything, and so that put us into a little bit of a tailspin,” Henry said.

Organizers briefly considered other keepsakes including leather patches, but opted for the stickers to ensure delivery in time for the event.

“We thought it was better to give something than nothing,” Henry said.

A handful of participants have been in touch to register their disappointment, but organizers said so far only two have pulled out of the race and deferred until next year.

“Everybody else said they’re crushed but they’ll be OK,” Henry said.

The County Marathon might just be ahead of the curve. A number of races around the region are now exploring various alternatives to the everyone-gets-a-medal tradition, for various reasons.

At this year’s Fall Colours run in the east Ottawa suburb of Cumberland, a Boston Marathon-qualifying event, organizers have ordered just 500 medals for about 1,000 participants in the marathon, half marathon, 10K, 5K, 3K and 1K races because many of the athletes have opted out.

Some of them said they just don’t want the medal.– Adam Kourakis, Somersault Events

Race director Adam Kourakis, who also owns event organizer Somersault, said the company conducted a survey of the roughly 26,000 athletes on its email list, asking whether they’d ever want to enter a race knowing there’d be no medal at the finish line.

“The overwhelming feedback is that people wanted to choose their add-ons. They didn’t want to be forced to be paying a certain price that included stuff they didn’t want,” Kourakis said. “Some of them said they just don’t want the medal.”

In response, Kourakis said he lowered the overall entrance fee by $10, but offered participants the option of a medal for the same amount.

For event organizers, offering such choices can be a real gamble.

The COVID-19 pandemic has not only gummed up the supply chain — orders must now be placed at least four months in advance, Kourakis said — it has also meant runners who used to register for races many months in advance are now waiting until the last minute.

“We want to order stuff well in advance to make sure it gets here on time, but we’ll quite literally double the number of athletes in a race in the four weeks leading up to an event,” he said.

Organizers of the region’s largest event, Ottawa Race Weekend, are also allowing participants to opt out of medals and shirts through their “green bib” program. Instead, a portion of their entrance fee goes to charity.

According to race director Ian Fraser, 27 per cent of participants in the 2022 event opted for a green bib, amounting to more than $35,000 in charitable donations.

“So I like to think we have an option for people that really love the medal, and we respect that and honour that. For those that don’t, we have another option,” Fraser explained.

Fraser said Run Ottawa, which oversees Ottawa Race Weekend and numerous other races in the National Capital Region, spends “well over a quarter of a million dollars” a year on medals. But he said organizers are also conscious of the “huge environmental cost” of manufacturing and shipping the weighty keepsakes, most of which come from China.

A recent opinion piece in Canadian Running urged race organizers to hand out ribbons instead of medals, which often end up forgotten in drawers and boxes, only to be tossed out years later.

“The event business needs to evolve in the same way that other industries have over the last few years. Is that medal sacred, or is there something else that participants might want that they could keep as a super important memory that doesn’t have the same [environmental] cost?” Fraser asked.

“I think as more of us become more aware and more responsible around that piece, I could see a day when that would happen. I don’t know if it’ll be on my watch, but I can see that as a possibility.”