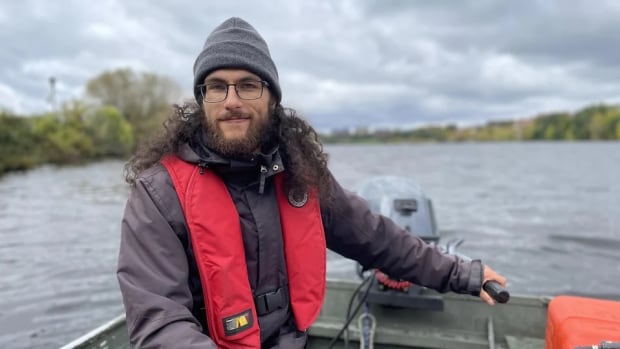 
Over the last few weeks, Gabriel Provencher-Pharand has been criss-crossing the Rivière Magog in a small motor boat, searching for tiny bits of plastic that have washed up on the banks.

The Magog flows from Lake Memphremagog, in Quebec’s Eastern Townships, through Lac Magog and past the city of Sherbrooke on the Lac des Nations before emptying into the Rivière Saint-François, a tributary of the St. Lawrence River.

“When you see ducks in areas where there are microplastics, you wonder if it’s getting into their system and if it’s affecting them.”

For the past 12 years, RAPPEL has partnered with the city of Sherbrooke as its “river guardian.”

Concerns raised by citizens about the accumulation of microplastics in the water system prompted the city last July to ask RAPPEL to map its findings and compare it to a similar undertaking in 2018.

The current project is not yet finished, but Provencher-Pharand says he has already identified 15 troublesome spots.

These particles become entangled in the aquatic vegetation and are difficult to remove from the water, he said. That is why RAPPEL’s experts say it’s critical to find the source of the contamination.

Hunting down the source

Sherbrooke spokesperson Jean-Daniel Duval said in a statement that because it involves industrial waste, the microplastics file was turned over to the provincial Environment Ministry in 2019, though the city has continued to follow up with the ministry in the ensuing years.

In 2020, two years after RAPPEL first alerted Sherbrooke to the discovery of microplastics contamination in the river, the ministry cracked down on Plastimum, a local plastic recycling company.

The ministry held Plastimum responsible for discharging microplastics into the storm sewer system, which empties into the river.

The company publicly denied any responsibility for the improper disposal of plastic waste, but nevertheless, it took corrective measures to satisfy the ministry’s demands.

In May 2021, the ministry issued a third notice to the company for the storage of non-compliant raw materials. The corrective measures put in place by Plastimum to prevent any further release of plastic into the environment are still under review, Radio-Canada has learned.

The head of Plastimum was unavailable for an interview.

This August, the ministry identified another company linked to the release of microplastics but has not made that information public. The ministry says the situation, along with what actions must be taken to correct it, are still being evaluated.

One location RAPPEL has already raised as a concern in its current mapping project is at the mouth of a small stream that crosses through a Sherbrooke industrial park before it empties into the Rivière Magog.

Gilles Lemelin, a member of an association of residents who live along the river, said he has no doubt that the plastic comes from the industrial park .

He recently photographed the microplastics he found accumulating near the shoreline after rain drove water through the storm drains into the stream and then the river, he said.

Valérie Courtemanche, who also lives near the river, said she observed large amounts of plastic on the banks all summer.

Courtemanche is among volunteers who pick up what plastic they can, but whenever a motorboat passes, the propeller churns up algae with bits of plastic clinging to it, she said.

Courtemanche said residents have made many complaints to the city, but nothing gets done.