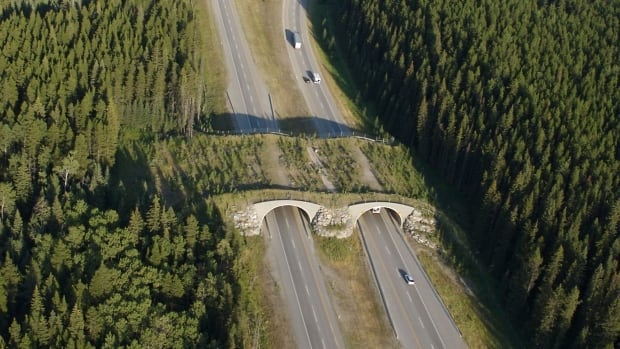 
Wildlife overpasses are doing one job well. They stop animals from wandering onto busy highways — saving both people and animals from the carnage of high-speed collisions.

But these structures aren’t all built to the same standards.

A group of researchers at the University of British Columbia got to work locating, measuring and then evaluating a number of these overpasses to see how different dimensions impact how effective an overpass is at encouraging wildlife to cross.

“If reducing collisions was the only goal, we could fence all highways and we would reduce collisions. But that would fully sever or fragment populations of animals,” said wildlife scientist Clayton Lamb, with Biodiversity Pathways and UBC.

They spun the globe using Google Earth and found 120 wildlife overpasses across the world. After measuring the dimensions of all the structures, researchers then zeroed in on 12 in Western Canada and the United States, where wildlife monitoring could help them better understand and calculate effectiveness.

Liam Brennan, a UBC environmental science student, is the lead author of the paper.

He hopes this evaluation will give engineers, planners and governments holding the purse strings a more informed way forward as they plan future projects. And start a discussion about a worldwide standard as more of these overpasses and interventions are built.

“Our study is doing the grunt work, quite honestly, for a lot of transportation professionals who are planning to build one of these,” Brennan said.

To maintain connectivity, animals must use crossings

Wildlife overpasses are seen as a gold standard for human and animal safety when it comes to avoiding deadly highway collisions — but they also offer an important way for different species to stay connected to their natural ranges.

In general, research has shown that wider overpasses encourage a wider variety of species to cross. That is key, if the goal of the overpass is to keep animal habitats connected.

This group’s analysis showed overpasses built between 40 and 60 metres wide produced crossing rates that were twice that of smaller builds, and resulted in a more diverse range of wildlife species use.

But most crossings are more narrow.

“They’re generally not wide enough,” Brennan said. “And they generally don’t meet the expert guidelines for their respective jurisdictions.”

Worldwide, Brennan said, they found crossings averaged 34 metres wide — the standards laid out in North America suggest an optimal overpass should be at least 50 metres wide.

The paper’s authors found only 29 per cent of those built in North America met that standard, while in Europe about 50 per cent of the wildlife overpasses met width recommendations.

Brennan concedes some of these overpasses could have been built before research created guidelines for how wide they should be. They also could have been victims of budgetary concerns.

The wider the structure, the more it will cost to construct.

Two wildlife overpasses were built in Banff National Park in 1996 for $1.5 million each. That was a costly piece of highway infrastructure for Parks Canada to pioneer. Now, those costs have paid dividends in the park and around the globe, Lamb said.

“Our new estimates are more like $17 to 20 million,” Lamb said, pointing to COVID and inflationary stressors. “The cost of steel, the cost of getting contractors, everything is going up. And I would say that the cost of hitting animals is also going up.”

Lamb says this is about starting a conversation about how to optimize structures. What’s outside of the scope of this paper, he adds, is working toward a cost-benefit analysis of dollars spent per animal helped safely across the highway.

“Starting to chip away at: how we do this better, what do we need to know to sort of sharpen the pencil on connectivity science?” Lamb said. “The conversation we’re trying to start here is, you know, what’s working, what widths are working better, and then how do you optimize that from a cost perspective to basically get the best bang for your buck?”

Canada’s economy eked out 0.1% growth in October and stalled in November, Statscan says