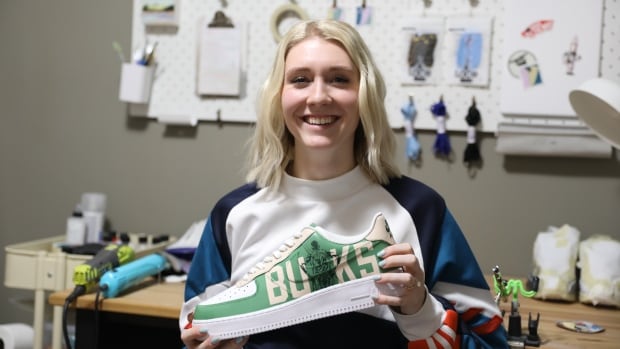 
Four years ago, Cassandra Simon unwrapped art supplies on Christmas Day. She had asked for tools to test out her idea of jazzing up sneakers with unique designs.

This Christmas, seven people unwrapped custom work by Simon, 25, who has turned a love of sneakers and a penchant for art into a home-based business that’s racking up a wait list.

A cracked-open window lets cold November air into the small room that acts as a joint studio and office in Simon’s Regina condominium.

She leans over a pair of white Vans she has crisscrossed with pencil marks. She fills in the triangular pattern with a narrow brush dipped in shades of blue and green.

A pair of Nike Air Max covered in strips of tape sits at the corner of her modest desk waiting to be airbrushed.

The desktop is marked with swooshes of paint that hint at past projects; the peg board in front of her, hung with the tools of the trade — shoelaces, scissors, tape — and cards featuring the Kicks By Cass logo.

Nike Air Force 1s are Simon’s most common commission, but she says she also receives requests for Air Jordans, Vans and Doc Martens — basically, any new pair of kicks that can act as a blank canvas. Customers send her the shoes, then they come up with the design collaboratively.

Each pair can take anywhere from four to 20 hours, depending on the intricacy of the design and the techniques used. Some of her most involved have been hand-drawn anime characters and tributes to athletes.

“I don’t necessarily have a favourite style or type of shoe to do, because one of the things I like a lot about doing this is that it’s different every time,” Simon said.

Birth of a business

Simon, who grew up in Edmonton, set records in track and field as a hurdler while a student at the University of Alberta.

“It’s very individual and having your own style in the sport is part of the culture,” Simon said.

Despite not having any formal art training, Simon has always been artistically inclined and recalls experimenting with various art forms with her grandmother.

Throw in a love of Star Wars and a pair of Nike Air Max 90, and you get her first foray into pumped up kicks.

The shoes caught the attention of her sisters, who naturally wanted their own. Then their friends asked for some, and the commissions grew.

The Nikes also caught the eye of another track athlete: Atlee Simon, who attended the University of Regina and ran into Cassandra at meets. The two began dating — which eventually helped Atlee net a pair of custom Air Max and Air Force — and he encouraged Cassandra to turn her passion into a business.

“I don’t even know how many pairs she’s done now, but it seems like every time she does a new pair, it’s better than the last,” Atlee said. “Her skills are improving and people are noticing that.”

Cassandra has received orders for everything from sneakers to wear with grad dresses to a pair for a charity fundraiser run by a University of Washington sorority.

She said it pleases her to see more women getting interested in sneaker culture, with companies expanding their offerings for women in turn. Her own female customer base is growing, too.

Cassandra moved to Regina in 2021 and married Atlee a year later. (She wore Air Jordan 11s with her wedding dress.)

She took up a teaching position and gained an entire elementary school’s worth of fans – and skeptics. As much as her students marvel at her work — donned at times by her colleagues — she finds herself having to constantly convince them she did the work herself.

It’s hard to blame them: The shoes are getting increasingly intricate as Cassandra challenges herself with new techniques, such as airbrushing, or using different textiles.

With her full-time teaching job, Cassandra can manage about three to five orders a month. She hopes to expand that in the future.

“Seeing people’s reactions just confirms to me that I’m doing what I should be doing,” Cassandra said, “and it just gives me motivation to keep doing it and be excited for the future of my little business.”

High inflation is coming for the beaver on your money. How long can the nickel last?

Is the COVID-19 pandemic almost over?