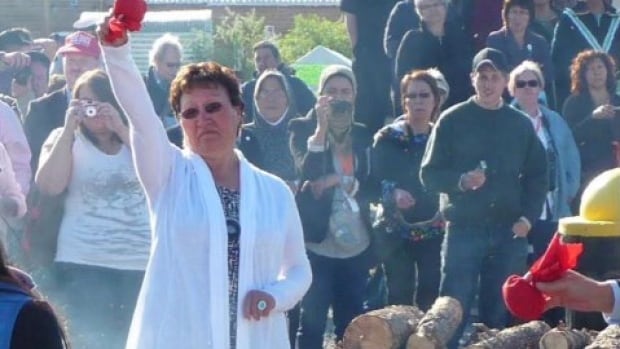 ‘Read that report’: How to keep being an ally from the perspective of 2 Indigenous N.W.T.’ers


When Lawrence Norbert, a Gwichʼin from Tsiigehtchic in N.W.T., attended a Roman Catholic-run residential school as a child, he remembers having very little say in what he did, and he said it limited how much he could think for himself.

He said that was a part of the trauma and violence he and many others faced at residential schools, and that he had to work to overcome.

On Thursday, Canada observed its first National Day for Truth and Reconciliation, which helped bring more attention to the ongoing trauma that Indigenous people faced and continue to face.

Norbert, who spoke with CBC’s Loren McGinnis, host of The Trailbreaker, leading up to the day, said if non-Indigenous people want to be allies, they need to do their research to start fully understanding the impact the schools had.

And, he says, they can start by reading the Truth and Reconciliation Commission of Canada’s final report. (Find all of the commission’s multiple volumes of reports here or read the summary of the final report (585 pages) here. Paper copies are available at local libraries.)

“If you want to be allies, read that report,” Norbert said.

“Read the whole report so that you get that real understanding of why we as Indigenous people who have gone through the residential school policy, have such a hard time dealing with your culture, your bureaucracy, your policies, your religion.”

Norbert and other students who attended Grollier Hall, a residential school in Inuvik, N.W.T., formed a group in the late 90s to speak up about the abuses at residential school, and the injustices of that system. They fought for compensation for that abuse and became one of 10 groups in Canada whose efforts eventually led to the Indian residential school settlement agreement, which included the common experience payment, the independent assessment process and the formation of the Truth and Reconciliation Commission.

He suggests if people don’t want to or can’t read the full report, then they can try to read the United Nations Declaration on the Rights of Indigenous People (full text here, 18 pages).

“My thoughts is that when a settler hears about what really happened in Canadian history, I think they should take on the responsibility of learning what that meant,” she told The Trailbreaker.

That includes understanding the lasting trauma today that can cause other problems including addiction.

She pointed to the conflict in Yellowknife involving business owners, the city, the territorial government and other organizations over where a shelter should be located. Many shop owners have said having a shelter on the same street as them would drive away business.

“That’s why I have a hard time understanding why the Yellowknife businesses don’t think that it’s important to acknowledge that this is a part of what happened to us,” she said.

Reconciliation not just one thing

Marie Wilson, a former commissioner of the Truth and Reconciliation Commission, said as a non-Indigenous person, it’s important to always “turn back to the survivors themselves.”

“I know there’s a lot of disdain and sometimes growing discouragement around whether reconciliation is even possible, or whether it even has meaning or whether people believe in it and all that sort of thing,” she said.

“What I know is that it was the survivors through their courageous court case and settlement agreement, that’s the wording they used. They asked for truth, they said, the purpose of the truth was to contribute to the freeing of spirits and to the healing of individuals and families and community.”

She also pointed out that the survivors say reconciliation is not just one thing.

“It’s way more complicated than that,” she said. “But what they said is that it is an ongoing, individual and collective process.”

She added that involves survivors and their families, all levels of the government, the churches and the people of Canada.

The Trailbreaker16:01Marie Wilson on the significance of this first National Day for Truth and Reconciliation

For now, Norbert said he’s grateful that younger generations in his community won’t face that same trauma he and countless others did.

“Here in Tsiigehtchic, I see young parents, they spend so much time with their kids out on the land, just about every weekend. You see boats going up or down the rivers,” he said.

“It just warms my heart because you know, their kids don’t have to experience what we’ve experienced.”

Support is available for anyone affected by the effects of residential schools.

The Indian Residential School Survivors Society (IRSSS) can be contacted toll-free at 1-800-721-0066.

The NWT Help Line offers free support to residents of the Northwest Territories, 24 hours a day, 7 days a week. It is 100% free and confidential. The NWT Help Line also has an option for follow-up calls. Residents can call the help line at 1-800-661-0844.

In Yukon, mental health services are available to those in both Whitehorse and in rural Yukon communities through Mental Wellness and Substance Use Services. Yukoners can schedule Rapid Access Counselling supports in Whitehorse and all MWSU community hubs by calling 1-867-456-3838.