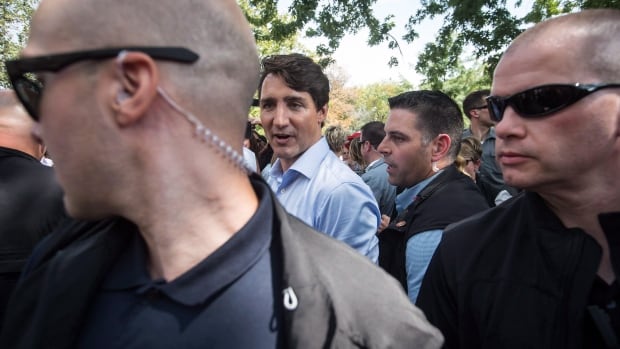 In the Ottawa region alone, 75 positions out of a total of 315 in the RCMP’s protection unit are unstaffed — a vacancy rate of 24 per cent — according to data obtained by Radio-Canada. Similar vacancy rates afflict the RCMP’s close protection units in other parts of the country, the RCMP said.

Several RCMP and government officials said the shortage of officers is complicating the force’s efforts to protect the prime minister, the Governor General, Supreme Court justices, diplomats and foreign dignitaries.

“Even for the prime minister, they are short-staffed at the moment,” said a government source.

The situation is ramping up tensions between the RCMP and the federal government. The police force says it has to earmark its resources for certain ministers or events based on threat evaluations that don’t always agree with the demands of ministers or their political staffers.

International Cooperation Minister Harjit Sajjan abruptly cancelled a planned summer appearance at the opening ceremony of an international AIDS conference in Montreal, citing his concerns about the protection offered by the RCMP, sources said.

A number of other ministers are unhappy with the Mounties’ protection and sometimes wonder whether the RCMP is taking their concerns seriously, said sources in ministerial offices.

The labour shortage is depressing morale among protection officers struggling to balance their work and family lives. Several sources said they fear that the number of hours worked by team members — often outside of Ottawa itself — exceeds acceptable standards.

“The only reason we are surviving right now is that the members agree to work overtime,” said an RCMP source.

The RCMP is modernizing its protection officer training. About fifteen officers have just completed that training and are ready to join this specialized unit.

But recruitment isn’t keeping up with attrition and sources say it will take years to recruit and train enough new protection officers to meet the demands of a worsening threat environment for public figures.

The RCMP has requested additional funding for the close protection unit. That request will be studied by the federal cabinet in the coming months.

Supt. Sean Martell, director of RCMP protective services, said “there is more that we want to do.” But faced with a shortage of employees specializing in close protection, he said, the RCMP is forced to “prioritize” resources toward essential needs and the most tangible threats.

“We are fortunate that we have very highly trained, very specialized, very dedicated individuals that get the job done. Everything is covered all the time, but at the same time, we realize a need to grow the teams,” said Martell.

“And there are constant demands coming in from every direction to do more.”

While provincial ministers in some provinces, including Quebec, are accompanied by armed drivers, federal ministers do not receive RCMP protective services unless they face specific threats.

Health Minister Jean-Yves Duclos, for example, received close protection service during raucous demonstrations against public health measures in Ottawa earlier this year. But for federal ministers, such protection is temporary.

Sources tell CBC News/Radio Canada that a number of Liberal ministers and their staffers are worried about a lack of protection at a time of deep schisms in public opinion and increasing threats to the safety of federal elected officials.

Specific policy files seem to be driving a lot of anger on social media. The current problems facing Hockey Canada, for example, have inspired threats from the so-called “incel” subculture, said a federal source. Other sources said issues such as gun control, natural resource development and vaccine mandates are inspiring hostility toward federal officials.

In 2020, during the early days of the pandemic, an armed man drove his truck directly into the barriers surrounding Rideau Hall before entering the grounds leading to the Governor General’s residence and the home of Prime Minister Justin Trudeau. He was spotted by civilian employees before being arrested by the RCMP.

In recent months, Finance Minister Chrystia Freeland has been yelled at in Alberta, Conservative Leader Pierre Poilievre’s wife been targeted by online threats and New Democrat Leader Jagmeet Singh has been accosted by a hostile crowd in Ontario.

‘What happened was wrong’: Freeland on recent verbal attack in Alberta

Deputy Prime Minister Chrystia Freeland has responded to her recent harassment during a stop in Grande Prairie, Alta., over the weekend. Freeland, who was born and raised in Alberta, said she is not intimidated by the behaviour and also noted how harassment affects people other than herself.

“The situation has deteriorated. It’s more serious than a year ago,” said federal Public Safety Minister Marco Mendicino. “It is an attack against our institutions and our democracy.”

Prime Minister Trudeau pointed out over the summer that federal cabinet ministers in Canada are still quite accessible to the public, although he acknowledged that the security situation has deteriorated in recent months.

“It feels good to see the minister of Foreign Affairs at a [supermarket] on a Saturday morning. It is something that has been a strength in our democracy, in our society,” he said. “At the same time, we must recognize that the political conversations, the debate, has become more bitter, more aggressive.”

An RCMP source said the real question is when — not whether — a violent attack on a federal elected official will occur.

“Sometimes, I find that we are playing with fire,” the source said.

Sources say Liberal officials are growing frustrated with a police service that, to them, seems frequently to downplay the threats to which ministers are exposed.

To the RCMP, however, the proliferation of aggressive language online does not automatically mean that ministers are more vulnerable now.

“It’s not because there is an increase in the language or the rhetoric or the conversations being had that the threat level has necessarily increased,” said Stéphanie Laplante, manager of the RCMP’s Federal Policing Threat Assessment Section.

The RCMP has a grid system it uses to evaluate how threats directed at elected officials affect the actual risk they face.

One of the main factors in that evaluation is whether the person making the threats has the intent or ability to carry them out. The RCMP also considers whether someone has escalated their threats or is showing signs of having a “fixation” on their target.

Laplante said she is aware that ministerial teams haven’t always seen eye-to-eye with the RCMP on the danger faced by cabinet ministers.

“We make sure that our process continues to be rigorous precisely for that reason … We want to make sure that we don’t miss anything and that our evaluation is precisely as rigorous as it is to be able to respond to people who feel they are not as safe as they should be,” she said.

Martell said the RCMP has multiple tools to protect elected officials in addition to close protection services, such as patrols or staffing specific events. The security of elected officials depends on several layers of protection, and some are less visible than others, he said.

‘We do take everything seriously’

“Even if our determination or our resource prioritization doesn’t provide exactly what they had originally asked for, we will mitigate it with other resources,” he said.

“We do take everything seriously, we look into it in great detail, we analyze every request that we get from our clients, and we will prioritize our resources where they are needed.”

According to government sources, Ottawa is exploring several options to offer greater protection to ministers, including:

In the short term, sources say, the likeliest option seems to be a boost in funding for RCMP protective services.

The RCMP believes it would be useful to offer a shorter course to people with relevant experience, such as former military personnel or former police officers from other organizations, sources said.

Creating an autonomous agency like the U.S. Secret Service — which has protected presidents since the 1901 assassination of William McKinley — is probably the most complicated and costly option. The federal government is unlikely to adopt that model, multiple federal sources said.

Some ministers favour the so-called “Quebec model” — where every minister gets a security officer — although some experts suggest it would offer only a false sense of security.

A government source said that it’s far easier to protect Quebec ministers — who usually travel to and from their ridings by car — than federal ministers, who regularly travel from one end of the country to the other by air.

Another problem with the Quebec model is that it does not align with the RCMP’s practice of assigning officers in teams of two.

The RCMP would need to substantially increase the size of its protective services operation to assign two officers to each of 38 federal ministers.

“If we just do a quick math, we see that the RCMP is currently unable to meet a model that would see a bodyguard and a driver assigned to each minister,” said Pierre-Yves Bourduas, a former deputy commissioner of the RCMP.

Federal ministers now have access to drivers who are members of their ministerial office staff. Several Liberal sources said these drivers lack any training in security or crisis management.

Several ministerial chiefs of staff say they feel the burden of protecting their staff ought to fall to the RCMP.

“We don’t hire staff based on their size or their ability to deal with threats,” said a Liberal government source.