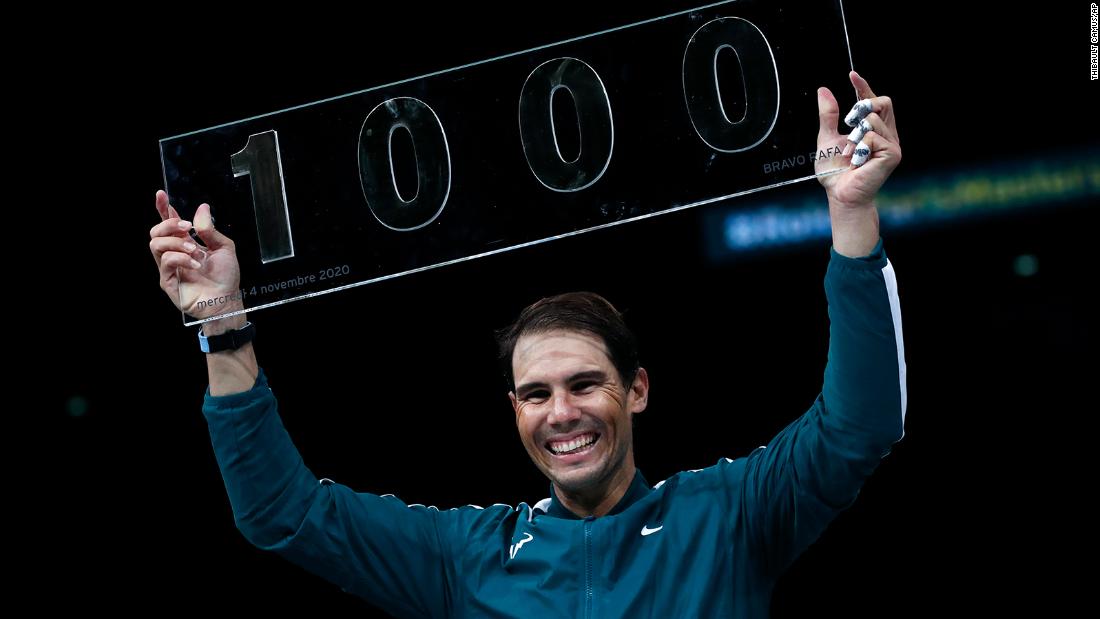 Instead, having beaten Feliciano Lopez to reach the exclusive club, Nadal was left to celebrate in near silence in a 20,000-seater stadium in Paris as spectators were absent amid the coronavirus pandemic.
The Spaniard, 34, joined Jimmy Connors (1,274), Roger Federer (1,242) and Ivan Lendl (1,068) as the only men in the 1,000-wins club since the Open era began in 1968 after his come-from-behind 4-6 7-6 (7-5) 6-4 victory in his opening game at the Paris Masters.
“[Winning 1,000 matches] means that I am old. That means that I played well for such a very long time, because to achieve that number is because I have been playing well for a lot of years and [that] is something that makes me feel happy,” Nadal said.

Nadal’s first ATP victory came when he was 15 years old. He beat Ramon Delgado, a Paraguayan then ranked No. 81 in the world, in a first-round match at the Mallorca Open in 2002, a victory which netted him 15 ATP Rankings points and a cheque for $5,850.

Eighteen years, and almost $122 million in prize money, later Nadal is one of the most successful tennis players in history.

Nadal’s first-round match was his first since claiming his record-extending 13th title at Roland Garros.

“I started the match in the worst way possible, especially against a big server like Feli,” said Nadal. “After that, I played under a lot of pressure the rest of the match, but I found a way.

“That’s the main thing … This victory is one that I am very proud of. The personal satisfaction sometimes is bigger when you win these matches than if you go on court and you win 6-3 6-3.”

Nadal will face Jordan Thompson in the next round, after the Australian rallied from a set and a break down to overcome Borna Coric 2-6 6-4 6-2.

While he has had so much success in Paris on clay courts, Nadal is aiming to win his first Paris Masters title.