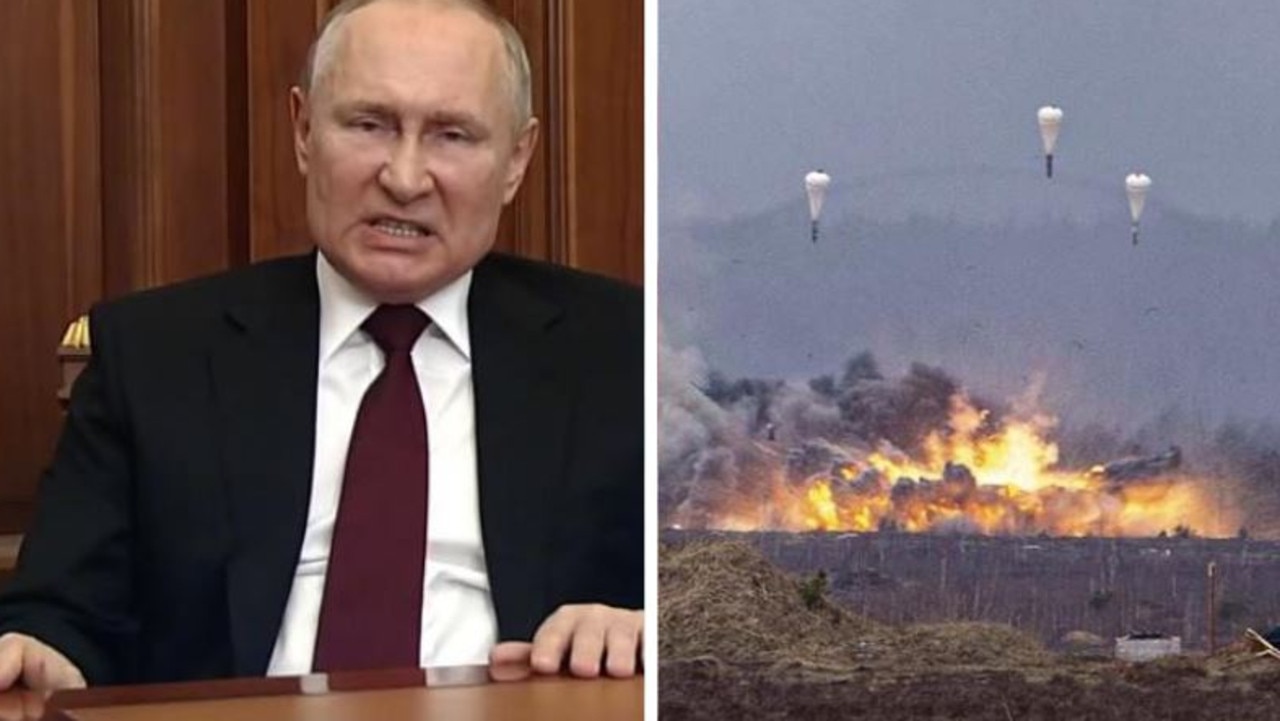 Vladimir Putin has been secretly working on a sinister plot for years – and there’s a terrifying reason why nothing can stop him now.

The world watched on in horror as Russia took its first terrifying steps towards an invasion of Ukraine today.

But the disturbing escalation in the conflict between the two nations is actually part of a sinister plot that’s been years in the making – and according to a leading expert, there’s little that can now stand in the way of Russian President Vladimir Putin.

While tensions between Ukraine and Russia have been rising in recent months, the fraught situation took a dramatic turn on Tuesday after the Russian leader signed a bombshell decree recognising two breakaway Ukrainian territories – the self-proclaimed Donetsk People’s Republic (DPR) and Luhansk People’s Republic (LPR) – as separate regions from Ukraine.

Soon after, another decree was issued revealing Russian troops had been sent to those rebel regions for “peacekeeping” reasons, with footage soon circulating on social media of tanks and forces crossing the border.

Australian National University’s Russian political expert Dr Leonid Petrov told news.com.au Russia had been planning the invasion of Ukraine – and potentially other states as well – for some time.

“The invasion started in 2014 with the annexation of Crimea, and the process continued shortly after that when the Russian-backed rebels effectively took two regions from Kyiv’s control in the eastern provinces of Ukraine,” he said.

“Putin has simply undermined the Minsk accord agreements, which was the peace process agreed on back in 2014 … which halted hostilities.

“Now, that armistice has been thrown to the dustbin and Russian troops continue their advancement whenever and as far as they want to.”

The Minsk agreement refers to a 12-point deal reached between Ukraine and Russian-backed separatists in Belarus in September 2014.

The ceasefire arrangement included a string of conditions, and the agreement soon fell apart, but the two parties met up again the following year and came up with a second, 13-point plan.

According to Dr Petrov, today’s escalation has torn that entire process apart.

“This basically puts Ukrainian territorial integrity under question – there’s no armistice, no Minsk process and Moscow recognising these two provinces means Moscow has effectively scrapped the agreement,” he said.

He added that an upcoming summit between US President Joe Biden and his Russian counterpart was “now meaningless” as there was “simply not much to talk about” – unless the leaders planned to redraw Ukraine’s borders in light of the new developments.

Dr Petrov said the “ball is in the court of the West now”, as Ukraine agreed in 1994 to give up its nuclear weapons in exchange for the promise and assurance that its territorial integrity would not be violated.

But given Russia’s aggression and nuclear capabilities, whether or not the West has the stomach to stand up to Moscow is anyone’s guess.

According to Dr Petrov, the planet is now facing one of the biggest shake-ups since World War II.

“I believe the world is now on the brink of a new major conflict,” he said, adding that he was convinced Russia could “break the current world order” like Nazi Germany did in 1939.

“The aggression started in 2014, and now it has turned into the hot phase,” he said.

“These days, Russia is the aggressor.”

So, can anything actually be done to stop the Russian President?

Unfortunately, Dr Petrov believes that’s no longer possible, for several crucial reasons – the first being that Russia won’t be affected by any sanctions.

“Russia will be subject to more sanctions and more aggressive sanctions and I believe Moscow is going to be diplomatically ostracised by the international community, but I think that’s what President Putin wants,” Dr Petrov said.

“He wants isolation, he wants to rule Russia indefinitely and he does not need to be integrated with the world economy or community.”

Secondly, the current situation in Ukraine is likely to be part of a wider Russian expansion plan.

“We saw back in 2008 during the war against Georgia he brought two enclaves which formerly belonged to Russia and now [it’s happening] with territories of Ukraine.

“We might see in the near future expansion into former Soviet republics.”

And Mr Putin’s plan doesn’t necessarily stop there, with Dr Petrov predicting that Central Asian republics could be subject to a Russian invasion, as well as nations in Europe and beyond.

“Nobody can guarantee the integrity of European Union states like the Baltic republics [which include Latvia, Lithuania and Estonia] which were formerly part of the Soviet Union. Russia will have the power to annex them as well,” he said.

“Putin cannot be stopped because of his state of mind.

And lastly, Russia’s nuclear capabilities mean taking on the rogue nation is a truly terrifying – if not downright impossible – task for the West.

“Putin has nuclear weapons and nobody would really dare to confront a nuclear-armed Russia,” Dr Petrov said.

“I think that the militarisation of Russian society that started again when Putin became President has been turning into all-out war preparation from the early 2000s, and has now reached the culmination point.”

Finally, Dr Petrov said Mr Putin had one final ace up his sleeve – the covert mobilisation of the Russian population.

“Now the Russian army has around 1.1 million people, but the mobilisation of reservists was ordered a few years ago and it was a secret order,” Dr Petrov said.

“Nobody really knows the scale of the mobilisation.

“But it can potentially inflate the Russian army to the size of the Soviet army, with more than two million people.”

States of local emergency help communities cope with disasters. Here’s how they work