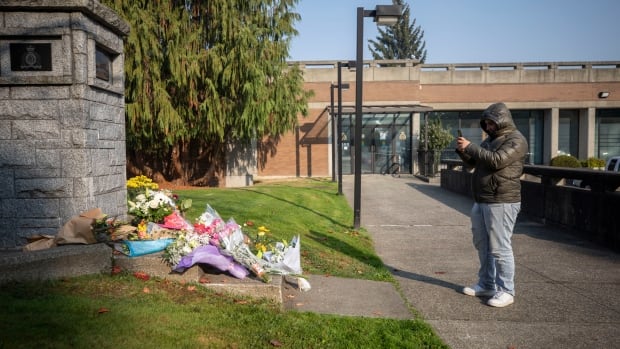 
Prime Minister Justin Trudeau said mental health supports need to be stepped up, so police are not the sole providers of outreach in such situations, as he paid tribute to an RCMP officer fatally stabbed at a homeless campsite in British Columbia.

The House of Commons held a moment of silence to honour Const. Shaelyn Yang, 31, who police say was partnered with a city employee when an altercation broke out at a park in Burnaby, east of Vancouver, and she was stabbed on Tuesday.

The male suspect, who B.C.’s police watchdog said was shot by Yang, was charged with first-degree murder on Wednesday.

Police said Tuesday that the man was seriously injured and was being treated in hospital.

Opposition Leader Pierre Poilievre, Prime Minister Justin Trudeau and NDP Leader Jagmeet Singh all said there needs to be more support to deal with violence against members of the police and RCMP.

The B.C. Prosecution Service said in a statement Jongwon Ham made his first court appearance on Wednesday and was remanded to Nov. 2.

RCMP said Yang was a mental health and homeless outreach officer who had joined the police three years ago.

Opposition leader Pierre Poilievre told Parliament Wednesday that Yang had been murdered while “courageously doing her job,” saying it was among a series of killings of police that were part of a “larger violent crime wave.”

He asked Trudeau what he would do to end it.

“My heart goes out to the family of Const. Yang, to the community, not just in B.C. but right across the country,” Trudeau said, referring to killings of police in Ontario and elsewhere.

He said front-line police dealing with mental health outreach needed “the tools to be supported as they encounter difficult situations.”

Trudeau said police should not be the only mental health workers accessible to many people. “They have been extraordinary at it but we need to provide better support,” he said, adding that the provinces and federal government should work together on funding.

Deputy RCMP Commissioner Dwayne McDonald said Yang was known as a kind and compassionate person, which made her death even more difficult to accept.

“As the commanding officer of the B.C. RCMP, I can tell you that an on-duty death is the most difficult and heart-wrenching incident we deal with as an organization,” McDonald said.

Homicide detectives are investigating the stabbing, while the Independent Investigations Office of B.C., which looks into any incidents of serious harm or death involving police, is also reviewing what happened.

A statement from the National Police Federation says Yang’s homicide marks the fifth on-duty death of a police officer in Canada in as many weeks, adding, “No one should fear their next shift could be their last, and no colleague should have to bear the unfathomable loss of a fallen peer.”

The Taipei Economic and Cultural Office, Taiwan’s de facto diplomatic office in Vancouver, said Yang was the daughter of immigrants from Taichung in central Taiwan, and office staff had been in contact with RCMP.

A spokeswoman for the office said it did not know where Yang’s parents were now, and the office had asked RCMP to pass on condolences to Yang’s family.

As part of Yang’s outreach work, she worked closely “on several occasions” with transit police officers to help unhoused people along the transit system, the Metro Vancouver Transit Police said in a statement.

Chief officer Dave Jones described Yang in an internal email to members as “a bright, enthusiastic and caring person.”

“Constable Yang was known by some of our members who on occasion had the opportunity to meet and work with her,” the internal email said.

A long line of police and emergency response vehicles drove down 12th Avenue in Vancouver to honour Const. Shaelyn Yang, 31, the RCMP officer who was killed in Burnaby on Tuesday.

“Events such as this can have an effect on some individuals in a variety of ways. I want you to know that if there are questions or concerns that you may have that we are here to support you and provide whatever assistance you may need.”

Premier John Horgan issued a statement Wednesday saying Yang’s death is a “horrific tragedy” and a stark reminder of the dangers faced by those working to keep our communities safe.

Federal Public Safety Minister Marco Mendicino told reporters Wednesday that he would be heading to the funeral on Thursday for two Ontario police officers killed in a shooting in Innisfil this week.

He recently attended the funeral of a fallen police officer in Toronto, he said, and would be reaching out to law enforcement in British Columbia now too.

“It has been a really difficult period, there’s no doubt about that. You know, there have been a number of losses on the front line, and I’ve been grieving with the community,” Mendicino said.

The statement from the police federation called the deadly attack “an unfortunate but stark reminder that police officers face risk every time they show up for work.”

It said that reality is “becoming all too common” and called October a “devastating month” for all Canadian police officers and their families.

A procession of police vehicles drove slowly through Metro Vancouver on Tuesday night to honour Yang.