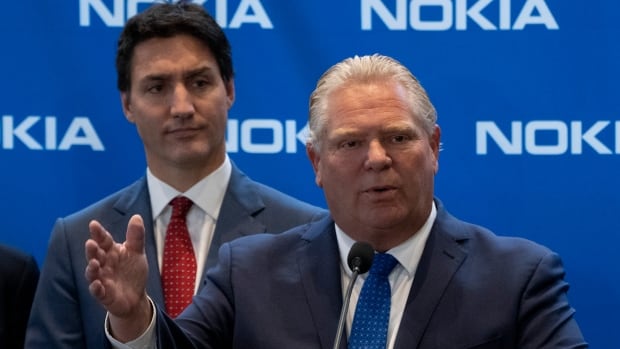 “It’s unfortunate,” Conservative MP Karen Vecchio said when asked about Ford’s vocal support of Trudeau’s decision to deploy the act to bring an end to a massive protest against pandemic measures that tied Ottawa in knots for nearly a month last winter.

The London, Ont.-area MP said she thought Ford should have waited to comment until the public inquiry into the federal government’s use of the Emergencies Act had finished its work. She said she believes the Public Order Emergency Commission won’t agree with Ford’s assessment.

Other Conservatives refused to comment before the cameras. Privately, however, several told CBC News they were unhappy with Ford’s public support for Trudeau. They offered comments ranging from “not great” to “brutal” — and two Conservative MPs said they were “pissed off” by the premier’s words.

None of the MPs were willing to attach their names to their remarks.

On Monday, while Ford attended an unrelated media event in Ottawa with Trudeau, a reporter asked the premier whether he agreed with the federal government’s decision to invoke the Emergencies Act.

Ford responded that he “stood shoulder to shoulder with the prime minister” on that decision and described the protest’s disruption of international trade and the lives of Ottawa residents as “unacceptable.”

The public inquiry examining the use of the Emergencies Act began last week. It will deliver a report on whether the government was justified in triggering the never-before-used law to quell the anti-vaccine mandate protests that gripped Ottawa’s downtown core in February and spread to some border crossings.

Conservative Leader Pierre Poilievre openly supported some of the protesters during his leadership campaign; he offered the slogan “Truckers, not Trudeau” in one online video. Poilievre repeatedly said he was supporting only the “lawful” protesters who were behaving “peacefully.”

“Yes to peaceful protests. No to blockades,” Poilievre said in mid-February.

Conservative MPs who spoke to CBC News said they felt Ford could have declined to answer the reporter’s question, or could have sided with the Ontario Provincial Police — whose lawyer told the Public Order Emergency Commission the emergency powers weren’t necessary to quell the protests.

This new friction between Ford and federal Conservatives emerged against a backdrop of lingering tensions that predate Poilievre’s leadership.

When Ford told his caucus members to sit out the last federal election and to not campaign for federal candidates, it vexed several Conservative MPs.

One Conservative MP pointed out that the party was led at the time by Erin O’Toole, suggesting Ford’s reluctance had nothing to do with Poilievre. The MP expressed frustration over Ford’s failure to back up the federal Conservatives.

Some Conservative MPs bristle at the friendly relationship between Trudeau, Deputy Prime Minister Chrystia Freeland and Ford. Freeland once described her relationship with Ford to The Toronto Star as like being “each other’s therapist.”

Asked about the Conservative MPs’ frustrations, Ford’s office painted the current situation as a positive one.

“The premier has said many times that he will work with any level of government, regardless of political stripe, to do what’s best for Ontario,” said a media statement from the premier’s office.

A spokesperson for Ford also pointed to other comments the premier made in Ottawa on Monday while standing with Trudeau.

‘I appreciate the partnership’ — Ford

At that event, Ford remarked that both Trudeau’s family and his own had been in politics for decades. “Forget these political stripes, I can’t stand them,” he added.

The premier claimed that in all those decades, there had never been such close collaboration between Ontario and the federal government as they are achieving now on everything from the pandemic to the technology sector.

“So I appreciate the partnership,” Ford said.

Contacted by CBC News, Poilievre’s office declined to comment for this story.

Another possible sign of the frosty relationship between the federal Conservatives and Ford’s Ontario Progressive Conservatives is the attendance list for this week’s Ontario PC general meeting.

Poilievre’s office said he would not be attending the event and did not say why.

All of the Conservative MPs who spoke to CBC News for this story said they wouldn’t be attending either.

One said that because Ford had doing nothing to help the federal Conservatives, he would do nothing to support Ford.