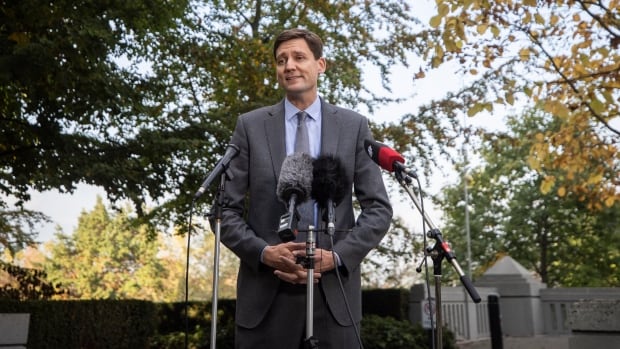 Premier designate David Eby says B.C. NDP leadership acclamation ‘not how any of us expected this to end’


British Columbia’s premier designate David Eby said being becoming leader of the B.C. NDP after the disqualification of his only competitor, Anjali Appadurai, “is not how any of us expected this to end.”

Eby will officially be declared party leader Friday, clearing the way for him to be sworn in as premier when Premier John Horgan retires in December.

“There are a bunch of people out there who are disappointed with how this leadership campaign went,” said Eby, speaking at a news conference in a downtown Vancouver park. Some may feel they don’t have a place in our party. That isn’t true. And I hope they’ll stick around.”

Appadurai, a former federal NDP candidate, was disqualified late Wednesday after a report by B.C. NDP chief electoral officer Elizabeth Cull found she “engaged in serious improper conduct” by working with third parties, including the environmental group Dogwood B.C., for membership drives on her behalf.

Appadurai and Dogwood deny any rules were broken.

Eby said he will be listening to the new party members who signed up to support her because of her strong stance on environmental issues.

“Right now my priority is reaching out to those members … to recognize the work she did in engaging them on a really important issue, an issue of priority to me, our province and government, and to let them know that I will be a leader for all members of the NDP and that climate change is an important issue for everyone in our province.”

Eby, 46, was first elected to the B.C. Legislature in 2013 when he defeated Premier Christy Clark in the riding of Vancouver-Point Grey by just over 1,000 votes. Once sworn in, he will become the 37th premier of the province.

Horgan congratulated his presumptive replacement during a news conference on Thursday.

“This has been a difficult road for everyone, some challenges along the way to be sure, but I am confident that the work of the table officers and the executive of the B.C. NDP have been thorough … [and] exhaustive,” said Horgan, 63.

“I’m proud David Eby will be the next premier of British Columbia.”

Eby has served as attorney general and housing minister. He said he will be releasing a plan for his first 100 days in office on Friday.

The names of the people on the NDP’s executive who decided to disqualify Appadurai were not immediately made public, though they were elected at the party’s most recent convention.

Asked on Thursday why the list was not published, Horgan grew visibly annoyed.

“Because they’re being inundated by people, by Green Party members, saying, ‘We want to take over your party.’ Leave them alone. They’re doing their job, volunteers, and they’re going to be abused by a bunch of people who cheated and want to get away with it? Sorry,” he said.

“I believe that these individuals … should not then be ridiculed and abused by people who only joined the party because they got an email from someone that doesn’t even belong to the NDP. I can’t be more frustrated by that type of thuggery,” he added.

WATCH: Premier says Appadurai could’ve been ‘welcome addition’ to NDP if not for campaign mistakes:

Outgoing B.C. Premier John Horgan said Anjali Appadurai, who was disqualified from the race to become his successor, could have been a welcome addition to the NDP, but violating campaign rules isn’t something the executive could look past.

Appadurai launched her B.C. NDP leadership campaign in August with an emphasis on tackling environmental and human rights issues in what was seen by many as a challenge to the party’s status quo.

Horgan said she could have been “a welcome addition” to the party, but violating campaign rules wasn’t something the party could overlook.

“Enthusiasm and vigour are welcomed in the NDP, but you have to follow the rules,” he said.

“This isn’t how anybody wanted this [race] to roll, but I think it’s a cautionary tale for all of us.”

Date for swearing-in as premier not yet decided

Cheers and clapping were heard from inside the NDP caucus meeting earlier Thursday while Eby, 46, spoke to his colleagues virtually.

“For us as a caucus, we’re ready to get to work because we know that’s important to British Columbians,” Kahlon said.

“There was a lot of excitement in the room.”

Kahlon said plans are underway to officially swear in Eby as premier, but a date has not been set.

“Everyone was expecting the race to go to December, but when the campaign doesn’t follow the rules, this is what happens,” he said.

David Eby to be next B.C. premier after challenger disqualified

David Eby is set to be named the new leader of the B.C. NDP and the province’s next premier, after the party disqualified his only rival from the leadership race, saying she broke campaign rules in an effort to sign up new members.