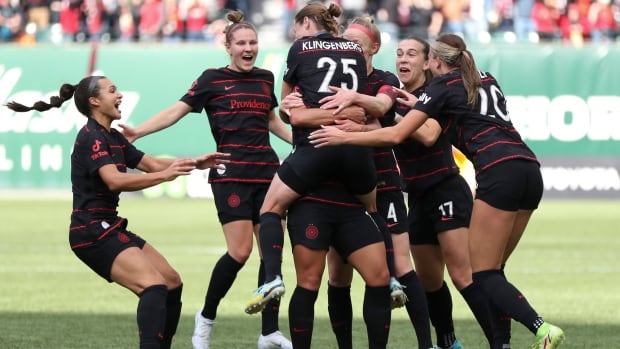 
This is a column by Shireen Ahmed, who writes opinion for CBC Sports. For more information about CBC’s Opinion section, please see the FAQ.

For more than a year, the Portland Thorns FC front office has been reeling from reports about the emotional abuse and sexual coercion of players alleged to have been inflicted by Paul Riley, the former coach of the National Women’s Soccer League team.

In addition to the initial reporting from The Athletic, a report released in October by former U.S. Attorney General Sally Yates revealed the Portland Thorns not only impeded further third-party investigation, but did not act swiftly nor in the best interests of the players and covered up the abuse.

In response, Merritt Paulson, who owns both the Thorns and Portland Timbers of the men’s Major League Soccer, fired two executives and stepped away from any decision-making related to the professional women’s team.

The pressure and stress of this situation are immense. Yet the Portland Thorns secured a spot in the NSWL final this past weekend when they edged out the San Diego Wave FC with a stunning last-second goal from Thorns’ powerhouse Crystal Dunn.

(It also just happened to be the first time in history that two women were coaching an NWSL playoff match: Rhian Wilkinson for Portland and Casey Stoney for San Diego.)

The Thorns’ FC win is unbelievable and the joy on the faces of the players is important to witness. This trip to the final can not only be viewed as resistance against the people who did harm to their teammates and fellow soccer players, but it is a bold statement to survivors. The beautiful game encompasses women, and it belongs to the people.

I have been a fan of the Thorns for many years, and I certainly bought into the idea of how Portland could be a blueprint for women’s soccer sustainability. But the reality is while the Thorns were blossoming there was rot at the roots.

While those with power have abused their privilege this season, as mentally tough as it is, the Thorns are navigating their way through damning revelations and staying fiercely competitive.

The connection between the Portland Thorns and Canadian women’s soccer is undeniable. The team captain is none other than our national team stalwart, Christine Sinclair, and her national teammate Janine Beckie plays alongside her. Thorns FC general manager is Karina LeBlanc (yes, the former goalkeeper of Canada’s women’s team), who quickly hired former national teammate Wilkinson as head coach.

The expectation that the club will be moving forward from the Riley allegations is important, but it also means there is a heightened level of accountability when the GM and head coach are former teammates of a legend like Sinclair.

In an unprecedented move, players themselves have been urging fans to support them on the pitch despite the problems fans might have with ownership. Most notable was goalkeeper Bella Bixby, who urged the fans to support the players in a social media post ahead of the semifinal.

Her message implored fans to help carry the burden with the players. Bixby’s words certainly struck a chord because more than 22,000 fans turned up for the game at Providence Park against the Wave, making it the second-largest attendance at a playoff game in NWSL history.

But is divorcing the players from the club ownership possible? It needs to be so that the players do not feel abandoned. The best way to move forward is to claim women’s soccer to be a game of the people. Holding firm in demanding accountability is imperative. Continuing to cheer for the squad — embroiled in this devastating situation through no fault of their own — is also necessary.

It may seem as if the situation is impossible. Players are reckoning with what happened at their club, the ways in which the owner was complicit, and managing their anger and frustration while trying to perform at one of the highest echelons of women’s soccer in the world.

Now there are not only movements from supporters urging Paulson to sell, there are conversations about the Thorns being publicly owned. Community ownership might be a plausible model for a city that loves its soccer but loathes the corruption and harm that executives have caused.

While a soccer community is gripped with anger and betrayal, players are moving to heal on the pitch, fighting for their dignity and their peers. Their playing is a form of bodily agency to express themselves against the abuse of women in sports. Teams from around the world have shown solidarity with the players of the NWSL.

Players from England and the United States Women’s national team unveiled a banner before kickoff in their match Friday at Wembley Stadium showing their support for victims of sexual abuse.<br><br>Both teams also wore teal armbands in a show of solidarity. <a href=”https://t.co/5cu8KqGc8K”>pic.twitter.com/5cu8KqGc8K</a>

Supporter groups such as the Rose City Riveters and SCAN (Soccer City Accountability Now) did hear the calls of Thorns players and they have been balancing diligent protest with supporting the players and their team.

The tweets of jubilation from the players are such a sight for sore eyes. Women’s soccer fans have every right to be furious with the missteps, the non-action, and the reckless and dangerous handling of abuse against players at their clubs. The reality is that the players alone cannot manage this burden. Abandoning them and ignoring their calls for help is what the front office did when cases of abuse were brought to their attention.

As a supporter of the most beautiful game, it is time to offer solidarity by showing the players that while accountability and change are critical, support will not waver. Those responsible for injustices must be exposed, and the vulnerable and innocent should not have to pay the price.

It is not an easy situation to navigate and there are many who feel that attending or supporting the Thorns just keeps lining the owner’s pockets. The system is not perfect and there is no easy solution. I, for one, will wear my Thorns jersey on Saturday when they face Kansas City Current.

Fans have an opportunity to be guardians of the game and shift the path of resistance by loving soccer, even when it’s hard.