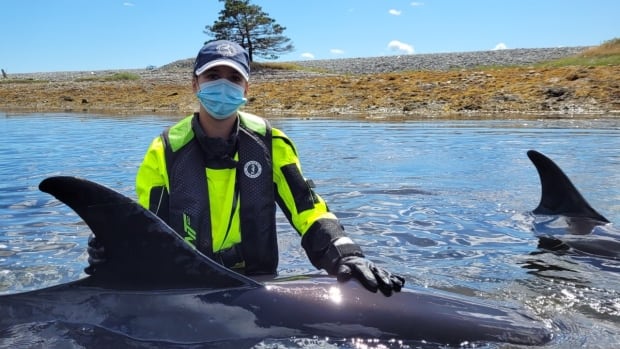 
Residents of a small island off Nova Scotia’s South Shore were instrumental last weekend in saving a stranded pod of dolphins from a shallow cove, a marine animal rescue responder said.

The Marine Animal Response Society received a call at around 10 a.m. Sunday morning informing them that five to seven dolphins were trapped in Hagars Cove on McNutts Island, response specialist Andrew Reid said.

Reid credited local community members for keeping the dolphins off the rocks and partially submerged while they awaited help during a falling tide.

“That was really great,” he said. “It gave us some time to quickly get our gear together, coordinate with the Department of Fisheries and Oceans and start making the two-hour trip down there.”

When dolphins are out of the water, they overheat “very quickly” and could die, he said. “We knew time was of the essence.”

Listen to the full interview here:

Residents of a small island off Nova Scotia’s South Shore were instrumental last weekend in saving a stranded pod of dolphins from a shallow cove, a marine animal rescue responder said.

When MARS and DFO personnel got to the island, there were five “partially submerged” dolphins stuck in the cove — two adults and three juveniles, Reid said.

“We knew that we were working with a dropping tide, so we had to respond quite quickly,” he said. The group set up to ensure the animals were upright and covered by wet sheets to protect their skin from the sun.

Reid said individual dolphins often get stranded when they’re sick or injured. But it “seems quite likely” that this pod was chasing mackerel that were running in the area and took a wrong turn into the narrow, v-shaped cove.

Within an hour of MARS arriving, Reid said, the dolphins were “high and dry” and probably would’ve died shortly after if they hadn’t responded.

Hearing that the cove consisted of several sandbars, the responders decided that the best approach to free the dolphins was to transport them overland across the narrow outcropping that lines the West side of the cove.

“It was a bit treacherous,” Reid said, adding that the terrain was lined with large cobblestone, which made it “difficult to work with.”

A community member provided an ATV with a trailer, which was used to transport the animals, in “dolphin stretchers” across to the shoreline on the other side.

“There’s no way we could’ve carried them the distance we needed to,” Reid said. Responders carried the animals — starting with the heaviest, which weighed about 250 kilograms — the rest of the way into the water.

“It was really a sight to see that, when we were starting to bring the juveniles over, we could really hear them vocalizing — calling out to the adults,” he said. “I think they were pretty excited.”

“We often see them when they get in closer to shore — they do get into trouble,” he said. “They’re not great at navigating shallow coastal waters.”

He said the dolphins have also been known to chase their food up rivers.

Once the responders got all the dolphins near open water, they released all five together, Reid said.

“They all went out together and headed in the right direction, so it was really great to see,” he said.

Reid said mass strandings are common and each one is different, depending on the physical location, type of animal and personnel responding.

He said situations like this tend to bring out the best in the surrounding community.

“Everyone wants to help and it’s a great example of a federal organization, a non-profit, like MARS and then the local community working together to achieve a great outcome,” Reid said.

He said those hoping to help with rescues should contact MARS first for guidance because marine animals can be dangerous.