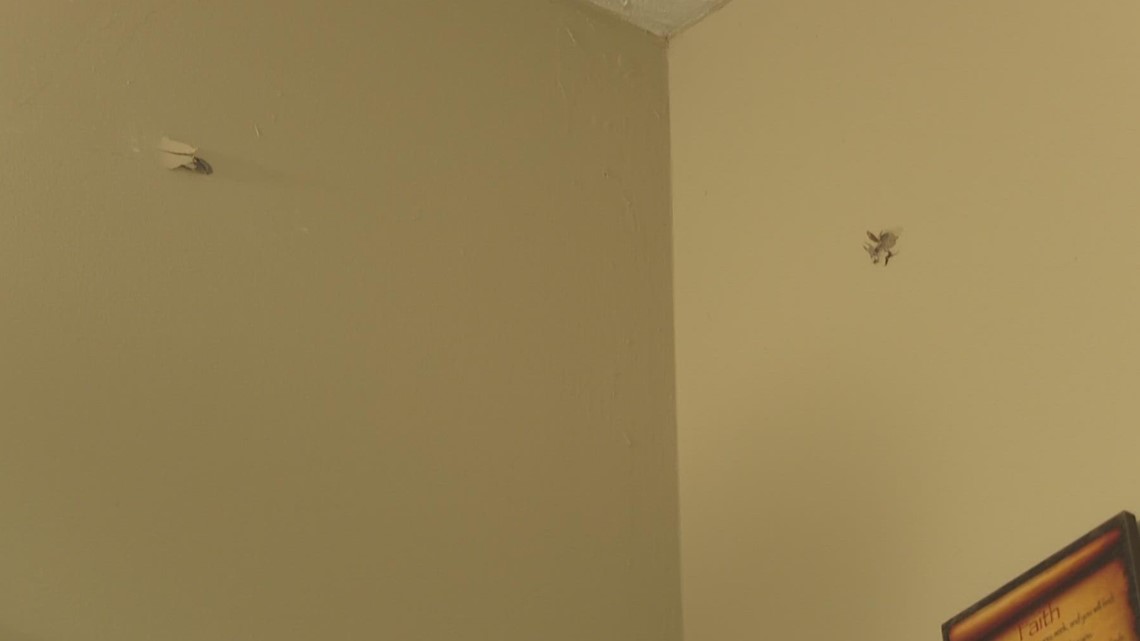 Officers found about 20 shell casings from both an automatic rifle and handgun Friday morning at the Pine Tree Condominiums.

SOUTH FULTON, Ga. — People who live in a South Fulton neighborhood said they’re terrified after multiple shootings in their community over the past few weeks.

City of South Fulton Police tell 11Alive a teenage boy is recovering after being shot by someone holding an automatic rifle just after 9 a.m. Friday.

Investigators are putting together the pieces of several recent shootings at the Pine Tree Condominiums, which left numerous homes with bullet holes and a young man recovering from being shot once in his upper body.

Felicia Jenkins said she now sleeps on the floor as her home is riddled with bullets.

“We’re scared, and a lot of people say they’re going to move up out of here because of that,” Jenkins said.

EXCLUSIVE: @SouthFulton_PD say the PineTree Condos have been shot up several times over the past few weeks, & an 18-year-old boy is recovering after being shot by someone holding an automatic rifle this morning. Numerous homes have bullet holes.@11AliveNews @khalidCares pic.twitter.com/UshHygNF4Z

“Last week after my children told me they heard a really loud sound in the house, my clock in the kitchen had fallen down, and it was because a bullet had come through my house, through the bedroom and through the kitchen,” Ariann Woods said.

“I don’t want to let my kids outside because we don’t feel safe here,” Woods said. “You don’t really see many kids out playing or people walking their dogs with how it’s been here the past two weeks.”

City of South Fulton Police Lt. Jubal Rogers said officers found more than 20 shell casings from a handgun and an automatic rifle. One of those bullets struck an 18-year-old boy. He’s expected to be okay.

“I believe this was the first time a person has been shot there in the last few weeks,” Rogers said.

Rogers said the teen didn’t live at Pine Tree Condominiums but was visiting someone there.

“We’re not sure on the relationship between the victim and the suspect,” Rogers said. “We have had a number of other incidents in the Pine Tree Condominiums.”

Police encourage anyone who sees or hears something suspicious in the neighborhood to call the City of South Fulton Police, 911, or CrimeStoppers.

“Violent incidents like this does affect the quality of life,” Rogers said. “It gets the neighborhood on edge. It can have some detrimental effects in the community, especially with our youth, so we want to make sure that we’re utilizing our resources appropriately to try to deter our youth from this, these types of incidents.”

“There’s been a lot of gunfire here recently, but especially hearing it was an automatic rifle, that is especially unnerving,” said Damien Johnson, who lives in the neighborhood.

South Fulton Mayor khalid kamau used to live in the Pine Tree Condominiums when he served the city as a councilman.

“This community was solid. To hear about the violence, the shootings that have happened over the past couple of months, it’s disappointing,” khalid said.

Mayor khalid is also taking action to clean up violence in the complex.

The Mayor said the city is putting on events to keep young people in the community occupied. One is the 3rd annual Spring Eggstravaganza across the street from the complex. It’ll be held at 2775 Creel Road on Saturday, April 16, from 3-7 p.m.