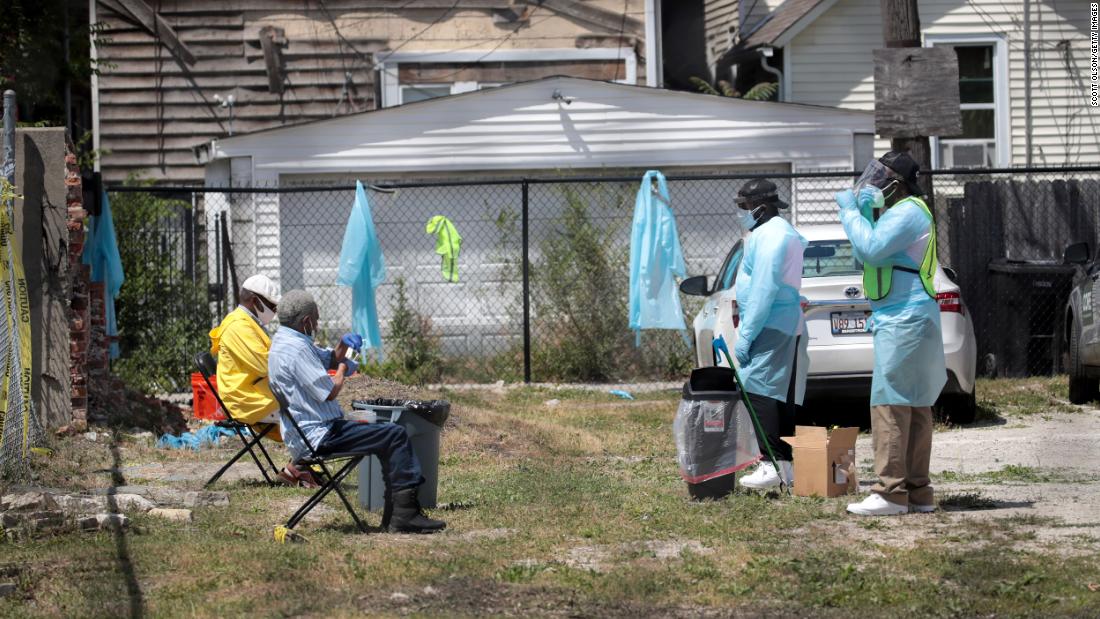 The community, Sykes said, has no pharmacies or grocery stores within walking distance. And many of her neighbors don’t own cars and suffer serious health conditions such as obesity and diabetes.

Chicago is among the cities across the country that could face roadblocks to vaccine access due to a lack of major pharmacy and grocery chains in their poorest Black and brown neighborhoods. Public health experts identify these communities as “pharmacy deserts” — areas where a substantial number of residents have limited access to retail or independent pharmacies. The problem is largely found in areas with low income residents who have barriers to transportation.

Civil rights leaders and health advocates fear the disparity could leave underserved communities scrambling to figure out how to vaccinate everyone as the federal government says pharmacies will play a key role in vaccine distribution.

“It’s going to be a mad scramble particularly if this vaccine is seen as safe and effective,” said Rev. Marshall Elijah Hatch Sr., of New Mount Pilgrim Missionary Baptist Church on Chicago’s west side. “It’s very difficult to imagine that there’s going to be some kind of egalitarian distribution. We are going to have to fight.”

The US Department of Health and Human Services (HHS) announced on Nov. 12 that the US government was partnering with large chain pharmacies and networks that represent independent pharmacies and regional chains to expand access to future Covid-19 vaccines. The list of pharmacies included CVS, Walgreens, Rite Aid and large grocery chains with pharmacies such as Walmart, Kroger, Costco and Publix.

“Pharmacy vaccinators are crucial public health partners for increasing access and convenience of Covid-19 vaccines,” HHS said in a news release. “By working with these partners, the federal government will rapidly expand access to Covid-19 vaccines.”

But relying on pharmacies to expand vaccine access could be challenging.

A study from the University of Illinois at Chicago in 2014 showed that pharmacy deserts — which were defined as a low-income community that either has low-vehicle access and is more than half a mile from a pharmacy or is more than a mile from a pharmacy regardless of vehicle access — were more prevalent in predominately Black neighborhoods in Chicago than in White ones. Between 2000 and 2010, there was a 20% increase in the number of pharmacies in White communities, with no expansion in minority communities, the study found.

There are nearly 500 active pharmacy licenses in Chicago, according to the state of Illinois. Only 23% are in Census tracts where the majority of the population is Black.

“It’s a national phenomenon,” said Dima Qato, the lead author of the study of Chicago drug stores and an associate professor at the University of Southern California School of Pharmacy.

Nationally, the number of pharmacies — chain and independent drug stores, as well as pharmacies in grocery stores and big box stores — has fallen to 56,788 in 2019 from 62,098 in 2015, estimated the National Association of Chain Drug Stores, an advocacy group.

Pharmacies in low-income, minority neighborhoods in urban areas around the country are at most risk to close, Qato said. This is largely because of lower reimbursement rates pharmacies are paid for prescriptions from Medicare and Medicaid compared with private insurance plans, she said. Non-elderly Black people are likelier to have Medicaid compared to White people, according to data from the Kaiser Family Foundation.

CVS spokesman Mike DeAngelis said in an email to CNN that the closures were a “difficult business decision.”

“In addition to providing Covid-19 vaccines at long-term care facilities beginning this month, we will also eventually provide vaccines in all of our 10,000 pharmacy locations,” DeAngelis said. “Barriers to access to the vaccine will be eliminated: vaccinations will be no cost to patients, available from many different pharmacy retailers and health care providers, and underserved communities will be an area of particular focus.”

An urgent call for solutions

People of color are being hospitalized and dying from Covid-19 at higher rates than white people.
Earlier this year, Democratic US Rep. Barbara Lee introduced the COVID Community Cares Act, which included $8 billion in emergency funding for faith-based and community organizations to address the pandemic’s toll on people of color. Sen. Elizabeth Warren introduced the Senate version of the bill.
Although discussions around the bill are ongoing, Congress approved a $900 billion Covid-19 relief package on Monday that includes $2.8 billion in testing, contract tracing and vaccines for medically underserved communities. The funding will also support nonprofits and other groups that distribute the vaccine and train public health messengers to build trust in communities of color.
Studies show that many Black Americans remain hesitant to get the vaccine because they don’t trust the government and they are concerned about possible side effects.

“It’s a heavy lift because we know the history of racism in this country,” Lee told CNN. “But we know this is a matter of life and death and we don’t want to see this pandemic continuing in the way that it has.”

In New York, a taskforce of Black civil rights leaders has formed to develop a plan to create equal vaccine access.

In a statement earlier this month, the taskforce said the country is “ill-prepared and ill-equipped” to deliver the vaccine to the Black community.

Jennifer Jones Austin, a taskforce member and CEO and executive director of Federation of Protestant Welfare Agencies in New York, said poor neighborhoods in the Bronx, for example, lack quality healthcare facilities and major pharmacy chains are not found on every corner like they are in affluent communities. There also aren’t enough doctors to vaccinate every resident, she added.

The taskforce is proposing solutions such as mobile clinics that go into underserved areas and vaccinate people, Austin said.

“We don’t want a situation where low-income persons, people of color have to travel miles outside of their own community in order to be able to access this vaccine,” Austin said. “We have to figure out how to bring that access closer to home.”

The vaccine rollout in Chicago

Meanwhile, Chicago residents are dreading what the vaccine rollout will look like in the city’s poorest communities.

Sykes said she is certain many Black residents won’t get the shot because of both distrust and limited access.

Hatch, the pastor, said he’s concerned the west and south sides could be left out of vaccine distribution. The city, he said, needs to consider the residents who have mobility issues and don’t have the means to get to a healthcare facility.

“It’s more of an expense for the people who can afford it the least,” Hatch said.

Dr. Thomas Huggett, of Lawndale Christian Health Center, said he treats homeless patients at a men’s shelter on Chicago’s west side and none of them have vehicles.

Huggett said one of his patients had to take two buses to pick up his medicine from a CVS because that is the preferred pharmacy for his Medicaid plan. There are only three CVS stores on the west side, Huggett said.

Huggett said safety net hospitals, churches and elected officials will need to work together to ensure residents can get the vaccine.

“We need to come up with a plan to make sure that Black and brown folks in underserved areas have access and don’t solely rely on pharmacies,” Huggett said. “There will need to be investment to make sure equity is addressed in high risk neighborhoods.”

Chaos in Queensland as queues grow

Teen charged as an adult in Singer Island killing