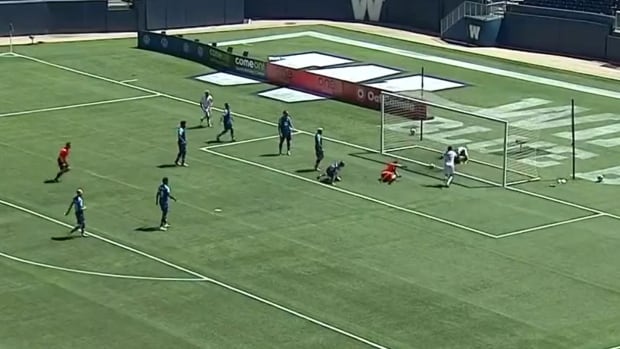 
Valour FC posted a 1-0 win over HFX Wanderers on Sunday but it was a no-goal that had people talking after the Canadian Premier League game.

Early in the first half at IG Field, a Valour attempted through ball from just inside the Winnipeg half hit a defender and bounced into the path of an onrushing Moses Dyer. The New Zealand midfielder headed into the Halifax penalty box and slotted a low cross into the path of an onrushing Alessandro Riggi, whose deflection from in-close dribbled under goalkeeper Christian Oxner in the 18th minute.

The ball was about to trickle across the goal line when Valour’s William Akio, coming in from the right, accelerated towards the ball and booted it — either to help it go in or as part of a goal celebration.

Unfortunately he redirected the ball just wide of the left post instead of into the goal.

Akio clarified what happened in a subsequent social media post.

“I really just missed a WIDE OPEN net. It’s simple as that,” he wrote. “Everyone makes mistakes on the job, it’s part of life. I will bounce back as I always have in life and football.

“Sometimes, we’re tested not to show our weaknesses, but to discover our strengths. Football has its ups and downs, but you can’t let the negative times consume you. Always keep it moving and believe in yourself no matter what.”

I want to start off by saying I’m happy for the 3pts and our teams resilience last night. I really just missed a WIDE OPEN net ? it’s simple as that. Everyone makes mistakes on the job, it’s part of life. I will bounce back as I always have in life and football. <a href=”https://t.co/rRvsgBlIOQ”>pic.twitter.com/rRvsgBlIOQ</a>

“Look, it’s hard to know,” he said after the game when asked about the strange play. “I asked Willie, ‘Were you trying to celebrate the goal just by kicking the ball out?’

“I don’t want to talk about it. Things happen so fast on the field and it’s hard to get into the moment and try to recreate it. We’ll all grow with it. I just see it as an opportunity for everyone to grow and it’s good that we got the three points.”

Dyer scored the eventual winner in the 84th minute as Valour improved to 5-9-4. HFX Wanderers fell to 3-7-8.