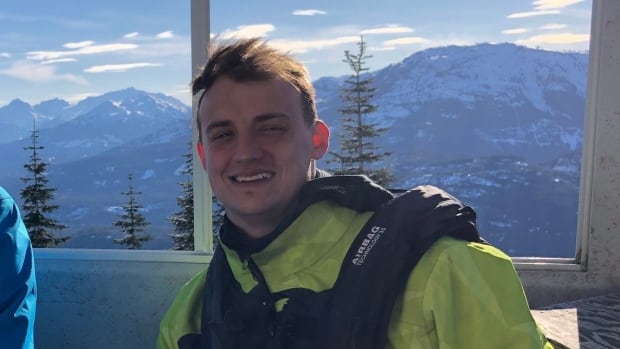 
Suzanne Bowker said her son lived his life to the fullest. He lived fast. He lived on the edge but he lived with care.

Bowker’s son, Nicholas Bowker, was one of two men riding snow bikes found dead near Pemberton, B.C., Tuesday after an avalanche. He was 30 years old.

Suzanne said while Nicholas was daring, he wasn’t reckless. He had avalanche training and the proper equipment.

“He just had a sense of living on the edge, but still being safe about it,” Suzanne said.

“I did worry about him, but you know what? I prayed for him. And I know that God was watching over him. And God has a purpose in all this.”

Bowker and another man, Graham Haywood, were reported missing Monday afternoon after an avalanche in the Goat Creek backcountry area near Pemberton, about 150 kilometres north of Vancouver. Their bodies were found Tuesday.

Haywood was identified by his employer, the Squamish-Lillooet Regional District, where he was a senior project coordinator.

“Graham’s work has had a significant community and organizational impact through successfully leading a diverse range of projects and he leaves a notable legacy of excellence,” district board chair, Jen Ford, said in a statement.

“Graham will be deeply missed by the entire team at the SLRD. This is an immeasurable loss.”

Nicholas Bowker’s parents say they are devastated by their son’s death but are also grateful for 30 years with him.

Nicholas grew up on a family farm in Tillsonburg, about 50 kilometres east of London, Ont.

Growing up around the soybean, corn and winter wheat, his parents said he became a hard-working young man who loved the outdoors and animals.

Nicholas would sneak barn kittens into the house, Suzanne remembered, and was a dedicated helper when the family fostered service dogs.

The family’s first service dog, Suzanne recounted, was a chocolate lab that Nicholas wanted to make sure could swim after hearing of other service dogs drowning.

“He put on his wetsuit here in April — which is a little cold in the pond — and went into the pond and swam with [the dog] for about an hour in a mucky old pond,” Suzanne said.

“When he sets his mind to something, he does it. He was back in that pond freezing just to make sure that that dog knew what to do if he fell in water.”

It was also on the farm he developed a love for motor sports by around 12 or 13 years old. First he rode the family’s quads, then embraced dirt bikes, motorcycles, snowmobiles and snow bikes.

On the farm, a teenaged Nicholas built his own motocross track in an unused field.

“It was fantastic,” Nicholas’ father, Steve Bowker, said. “He seemed to know how to go ahead. He certainly had a knack for equipment.

“He was trucking dirt over here and making mounds and corners and jumps and all sorts of stuff. It was fun to watch.”

Nicholas moved to Northern Alberta in his mid-twenties to work as a heavy equipment operator building oil and gas pipelines. He moved to Abbotsford about a year ago where worked for a property developer.

His mother said he took great pride in his work, especially when it came to precisely building rock walls.

For Nicholas, the outdoors was everything. He loved getting on his snow bike — “It was like the bike was one with him,” Suzanne said — but he also loved hiking and kayaking.