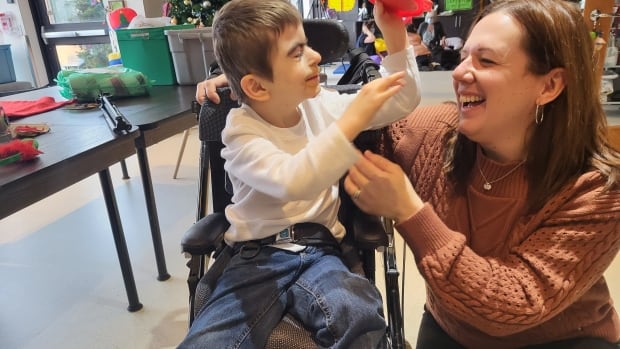 
Karine Philipps cherishes every one of her son Zachary’s smiles.

“It’s the best thing,” says the mother of one.

Born with a rare genetic disorder, 10-year-old Zachary is unable to walk or talk. So smiling is the way he communicates.

Due to the nature of his disorder, Zachary’s life expectancy is unknown. That’s why Philipps is committed to ensuring he gets the most out of every day.

And nothing makes Zachary happier than music and shiny lights — both of which can be found in abundance at the Lighthouse Children and Families, a Montreal program he’s attended since he was a baby.

The Lighthouse — called Le Phare, in French —  is a 24/7 pediatric palliative care resource in Quebec dedicated to children with life-threatening illnesses and their families.

It offers a full range of free services provided by its medical and care teams, including respite care with overnight stays, support for symptom management, end-of-life accompaniment and bereavement care.

It’s a place Philipps never expected her family to be, but one she can no longer imagine them living without.

“We know that when we walk in here, there’s no judgment, there’s love and there’s a bunch of people who are just there to take care of [Zachary] and … give him the best possible stay and make it fun and a happy place for him,” she said.

A place to live life

The program, located in Montreal’s Rosemont—La Petite-Patrie borough, offers resources that allow children to thrive, including specialized recreational therapy, massage therapy, music therapy and pet therapy — all while taking into account the importance of play.

“Play is the universal language of childhood,” said Dr. Silvana Barone, a pediatrician and the medical director at the Lighthouse. “We believe that every child should be granted opportunities to play regardless of their physical or cognitive limitations.

“Our role is to say, ‘how can we make every day better for these children and their families?'”

The program is also meant to help out parents, many of whom have to take on the role of nurse 24/7 to address the complex medical needs of their children with life-limiting illnesses.

“By allowing parents to bring their child here for respite stays, it allows them to take a breath, regroup, have a breather, and their child gets to come and spend some time in an environment that’s safe and that is fun,” said Barone.

While most of the children that come to the Lighthouse are referred by Montreal’s two large pediatric hospitals — the Children’s Hospital and the CHU Sainte-Justine — the facility gets referrals from the community as well.

And with the Lighthouse holding 12 of Quebec’s 22 beds reserved for pediatric palliative care, Barone says the province needs more.

“We know that there are families who could benefit from these services, but we don’t necessarily have the capacity,” she said.

The program gets about 50 per cent of its funding from the Quebec government, with the rest coming from donations.

“We need to be able to respond to the unique needs of children and their families,” she said. “Right now we’re doing our best to do so, but we could always use extra support.”

Support until the end

Philipps says she feels privileged to have the Lighthouse as a resource —  despite how disheartening it was at first to hear her son fit the facility’s specific criteria.

“You can take some prenatal courses, you can take some courses before you get married, but there [are] no courses or nothing to prepare you for having a child who has specific needs.”

Barone says while she understands that thinking about the death of a child “goes against the natural order of things,” ignoring this reality does a “disservice to the children and the families that really need these services.”

“We can really be there for the families and the children all along the illness trajectory, which sometimes could be months or even years,” she said.

“So we’re there to offer support all along that path, regardless of what the future holds for the child.”

Fed up with federal agency delays, air passengers turn to courts for compensation instead