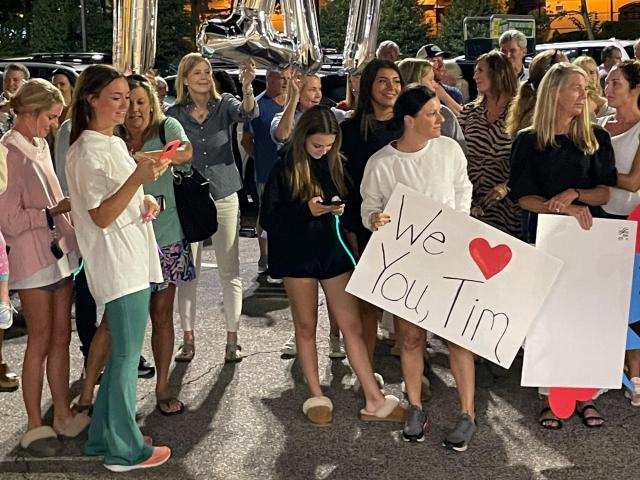 Over $26,000 raised for Harris Teeter employee after emotional sendoff :: WRAL.com

When the community found out Tim McCloud was leaving, they decided to hold a fundraiser to show him how much he’s meant to them over the years – and ended up giving him a life-changing sendoff.

Just about every day for more than two decades McCloud made the commute from Wilson County to the Harris Teeter on Glenwood Avenue in Raleigh.

Officially, he’s bagging groceries but to his customers, he’s doing much more.

“He’s just incredible. He’s legendary here, I don’t think he even knows it, that’s what makes it so beautiful,” said Caviness. “He does not have a clue what a great impact he’s had within our community.”

In years worth of moments in the checkout line, she’s been able to talk to him about anything – they’ve even cried together,

And he’s watched her children grow up.

Caviness said many of her friends have the same kind of relationship with him.

But two weeks ago, McCloud told her something she wasn’t prepared for.

“He started talking about an opportunity opening up in Wilson, nine minutes from his house,” said Caviness. “I started crying. I was like ‘you can’t leave me.'”

After 23 years, McCloud was transferring to a Harris Teeter closer to home.

Caviness decided on a fundraiser.

She launched a page on GoFundMe, without telling him, with the goal of raising $1000.

The site hit that goal in under an hour.

McCloud had no idea.

On Tuesday night, Caviness went shopping during McCloud’s final day of work – and asked him to walk her out one last time.

Hundreds of people cheering him on with signs and balloons were waiting for him.

He was overcome with emotion.

And then, the big reveal. They presented McCloud with the results of the GoFundMe.

As the crowd said their goodbyes, McCloud told WRAL News what this final gift will mean to him.

McCloud said more than anything he’s going to miss the community he had here in Raleigh.